After nearly a week of clouds and rain, the sun came out today! It began with a peaceful walk out of town.

This bridge reminded Mikey of many that he had seen last year on the French Camino. More importantly, the blue sky was a welcomed change.

Mikey stocked up on water from this fountain on the outskirts of town. Still, its selling point of being “good and free” and the “Thank you very much for your trust” bits we a little concerning.

There is a lot of trust that goes into walking the Camino. We pilgrims trust that the water is pure, that the arrows lead in the right direction, that the bed is clean, and that we can trust both those walking and the locals who tend to our needs. Like the chair we trust to bear our weight, these things are just expected along the Way. 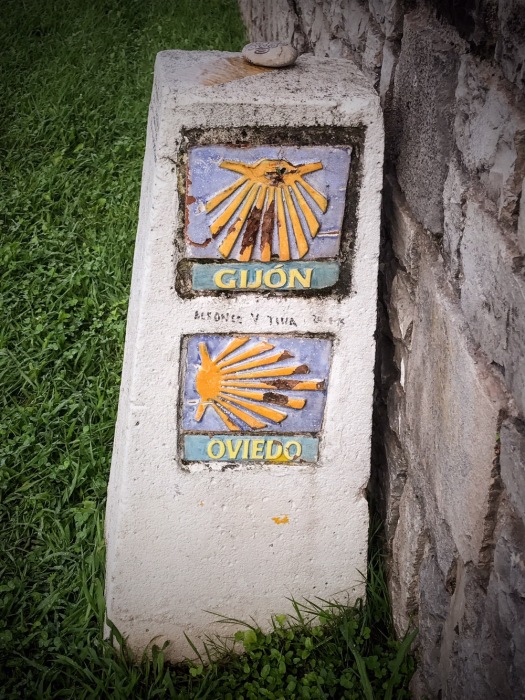 Well, the choice came upon him before Mikey had really considered his options. Today the Camino splits and one can continue towards Gijon on the Northern Way or head towards Oviedo along the Primitive Way. Our pilgrim paused only slightly before deciding to continue the route he started and head towards Gijon. 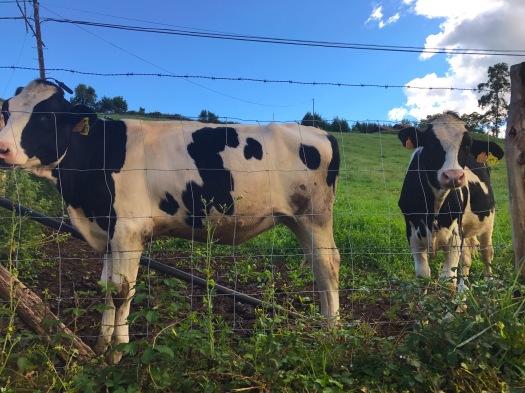 Not to second oneself, but these ladies’ uncertain looks made Mikey question his decision. 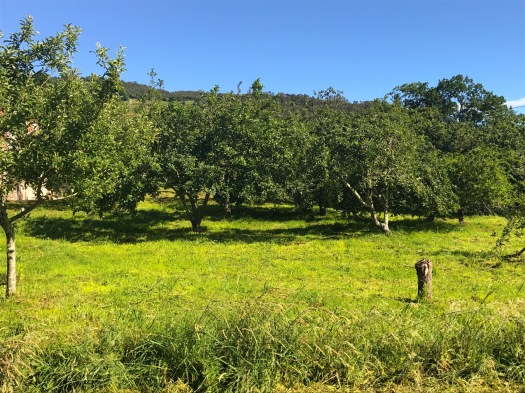 Regardless, we were in apple country and would have endless views of orchards for most of the day.

Unfortunately, it isn’t yet apple season, so these tart little fruits would be completely inedible. 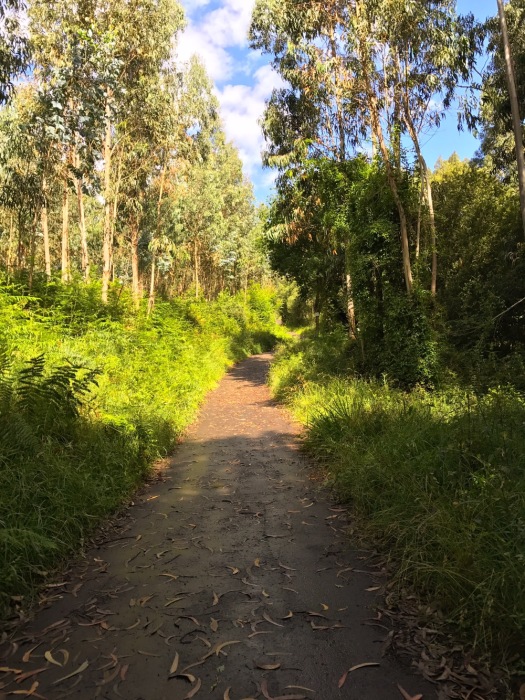 As the path began to climb, we left the apple valleys below. What you really can’t see from this picture is just how steep the climb really was. In less than an hour, we climbed a 400m ascent and ended up literally  panting at the summit.

But, what a summit it was! The view was breathtaking even after Mikey had resumed his normal heart rate. 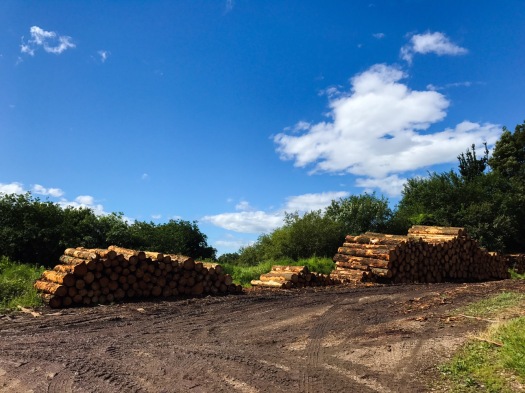 The mountain was also home to many logging roads and downed trees were stacked neatly in many places.

OK, this sign was a little weird. A zone where you are free to fish without death? Like, are the other rivers poisonous or do the locals elsewhere kill would be fishermen? Hey, inquiring Mikeys want to know!

Aside from refraining to kill fishermen, this hamlet had a lot of large cider barrels. Many were wrapped in plastic out in the fields.

Others existed in all stages of construction. Mikey passed a workshop where two locals were in the process of assembling one of these gigantic barrels. Suddenly, the lumber stacks on the mountain made sense!

This was just a neat tree that was practically hollowed out.

And this was just a scarecrow in a garden. The interesting thing, however, was the use of CDs to reflect light and scare away birds.

Well, Mikey had now walked a little over 20km without taking a break. As he neared a campsite just outside of Gijon, he could smell barbecue.

In addition to a 6€ place to stay, the campsite had a restaurant and it was grilling ribs! Well, Mikey waited out a rainstorm (yes, they pop up out of nowhere in Asturias) and finally got to enjoy said barbecue.

Ribs, salad, a little wine, and Mikey is happy. Gijon, the largest city until Santiago, can wait until tomorrow. Mikey plans on enjoying every last bit of this culinary spread. Let’s touch base from Gijon’s Roman baths tomorrow. G’nite!