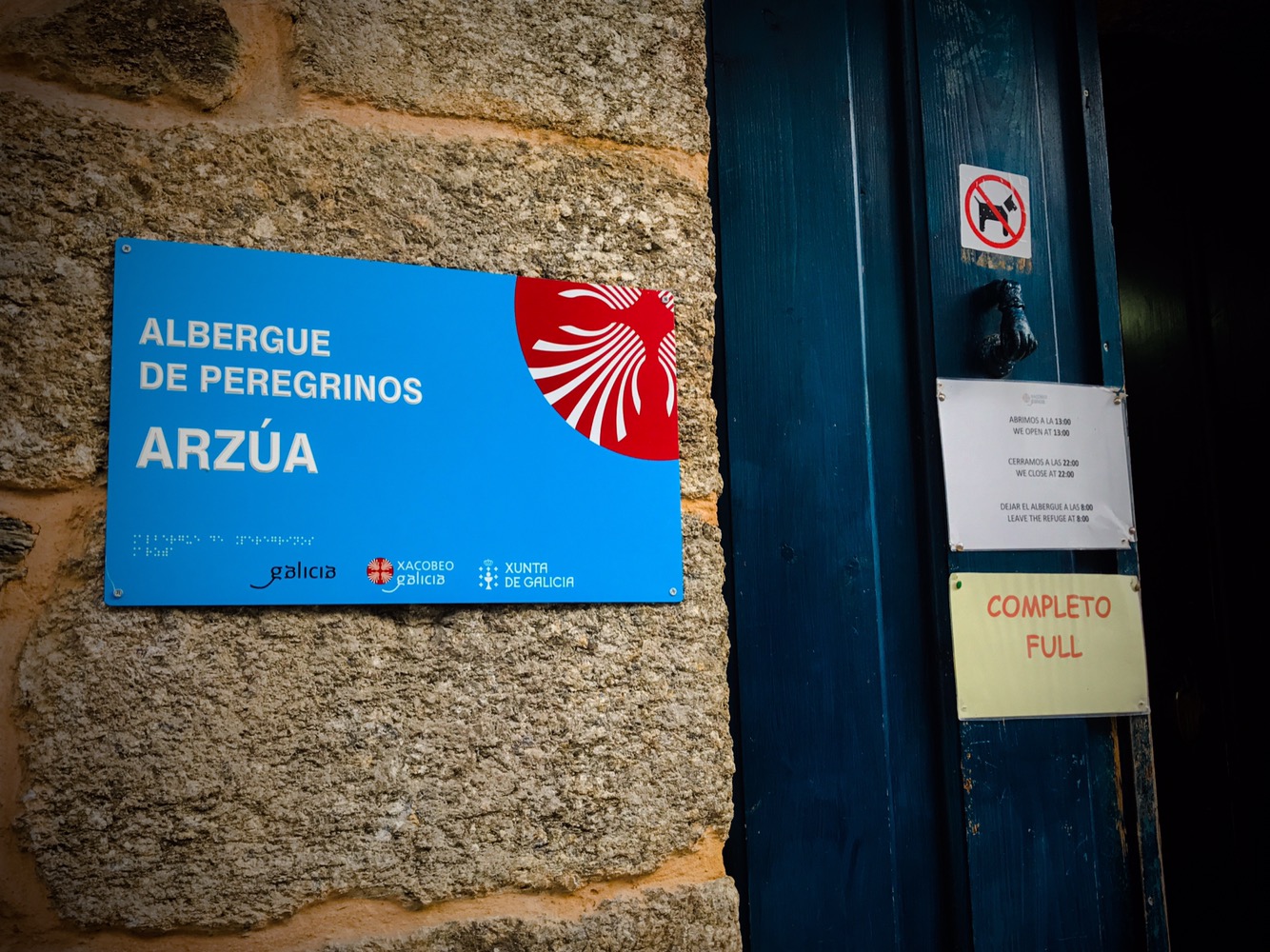 We bade farewell to the monastery today and headed to the penultimate stop Mikey and Frank made on their pilgrimage last year – Arzua. 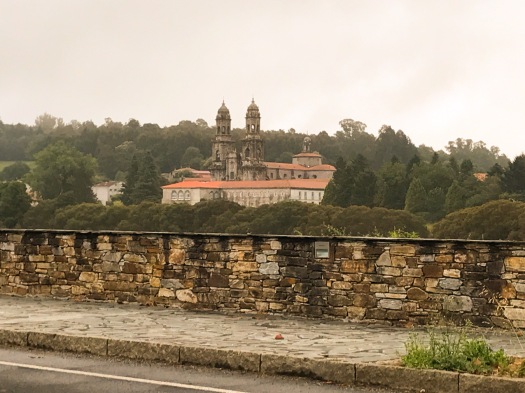 Although this monastery is only part of the Northern Camino, we would quickly arrive in Arzua where the our route joins up with the French and Primitive Caminos. The popular joke today amongst the Camino del Norte pilgrims is, “Be careful not to drag your feet in Arzua, lest you kick a rock and hit two pilgrims!”

If you’ve read the FAQ part of this blog, then you know how exponentially more populated the French Camino is. As such, we rough and tough northerners have an air of supremacy.

OK, we should explain. Both the French and Northern Caminos lead to Santiago. Both are long and hard hikes. Perhaps the main difference arises equally from population and physical difficulty. That is to say, as the French Way is more physically accessible, more people walk it. Basic supply and demand theory goes that if more people choose this route then more services are built to support said pilgrims. Conversely, if a path is more physically limiting, fewer pilgrims will walk it and less infrastructure will be built.

One pilgrim recently referred to the French Camino as “Disneyland.” Having walked this route before, Mikey countered with, “No, it’s more like a river. Some choose to go in a raft with better guidance and cushion while others kayak solo. Regardless, we’re all still on the same damn river!”

Speaking of rivers, the way was pretty damp this morning due to last night’s rain. Still, everything was so incredibly green and Mikey got to walk for a long ways with a Portuguese couple he had last seen walking from Guemes to Santander!

OK, there were a few jokes as we passed the hamlet of Casanova. I mean, imaging meeting your soon-to-be in laws: “You’re from CASANOVA? I mean, what intentions do you have with our …” It’s got to be priceless!

The scenery was equally priceless for quite some time. In the far distance is a cattle barn that was perfectly framed by a rolling hill’s arch. Mikey liked the contrast between the peaceful pastoral scene and the harshness of barbed-wire.

Soon after, the sky grew dark and rain set in for a couple of hours. For the third or fourth time, Mikey donned his “nunzilla” poncho and trudged along an eerily straight road.

As Mikey’s Pop Jim used to say, “This too shall pass.” It did. After a couple of hours, the rain abated and a beautiful wildflower/weed glistened before us.

Before long, we had arrived in Arzua. Mikey quickly checked into the public albergue and set about trying to remember this town. 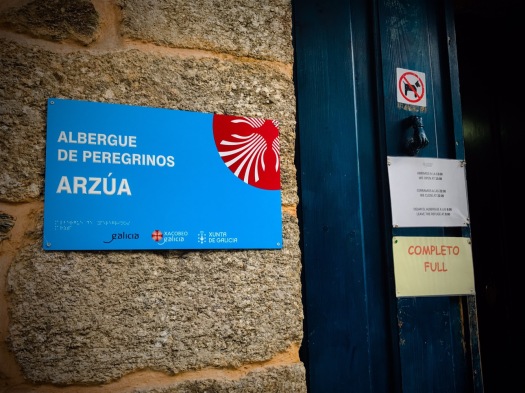 Oh, and just in time as the albergue filled to 100% not long after our arrival! 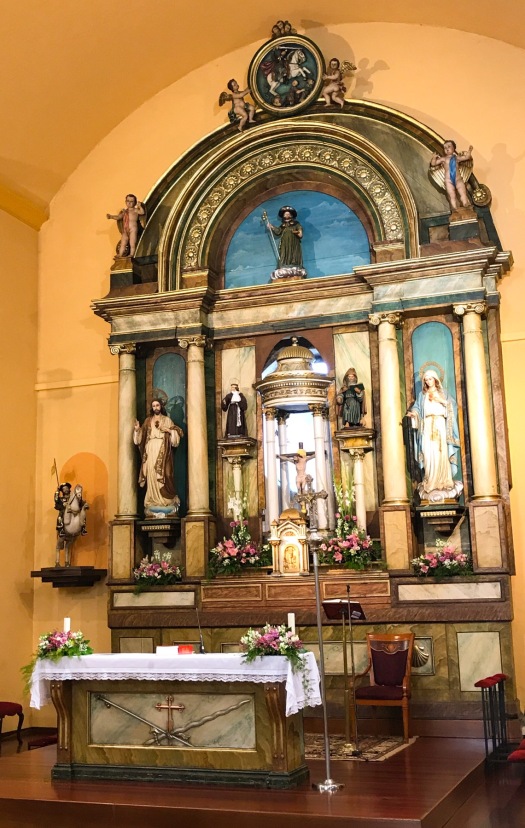 He visited the church, but couldn’t place the altar. I mean, the dual depiction of St. James and St. James Matamoros should have rung a bell! 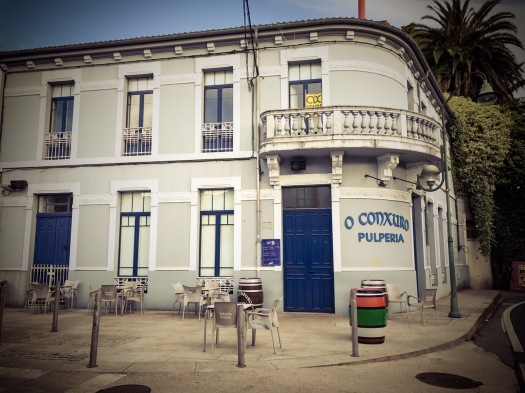 It wasn’t until he passed this “pulperia” for the third time that Mikey remembered having dinner here last year and in the middle of a downpour. He and Frank had just done laundry at a private albergue across the streen and ran across with borrowed umbrellas to snag some grub. Arzua hadn’t been memorable because we were stuck inside during a storm! 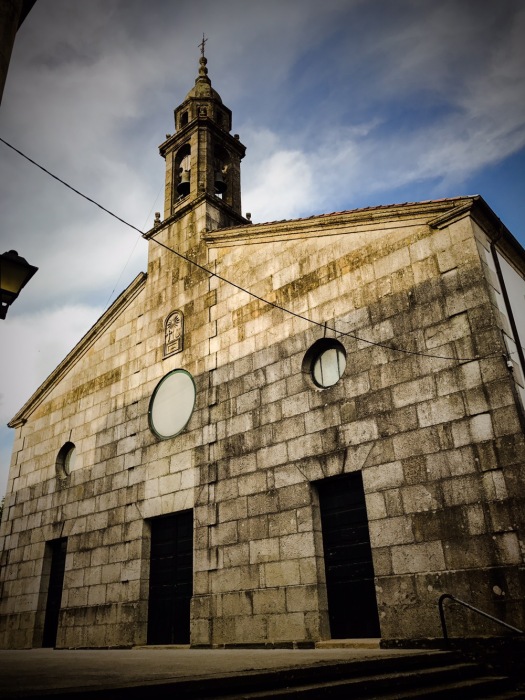 Mikey headed over to the church (that he and Frank had never visited) in hopes of attending the Pilgrims Mass. Although keeping up with the standing, sitting, and kneeling took concentration, this really was a special service. As he isn’t Catholic, Mikey did not receive communion. Still, watching many of his fellow pilgrims limp and even assist others to the altar was really special.

Say what you will, but the Camino is something so special that it has to be experienced to be understood. Now, almost at the completion of his second Camino, this pilgrim still hopes to one day understand it.

At the end of the service, the local priest called all pilgrims to the altar for a blessing.   He was pretty jovial with us, but the holy water part got a bit crazy. I mean, SeaWorld keeps orcas under inhumane states of captivity, but even they mark off the “splash-zone!” G’nite, y’all. 😉