It seemed like this storm front would be sticking with us for a bit, so Mikey was in no hurry to leave at first light. Instead, a leisurely mid-morning coffee and fresh juice finally urged us on from the hotel/restaurant where the gusts of wind almost literally flung Mikey flailing in his poncho into the street. Whatever this wonderful woman’s name, we can only light a candle for the server who ran outside to save us by righting the poncho before slapping Mikey’s back and wishing him a “Buen Camino.” You are Mikey’s true “Jose de El Cuervo!” 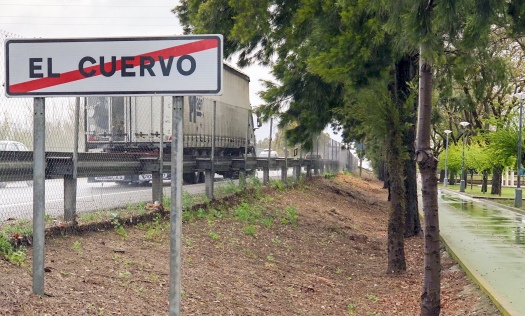 Considering such a dramatic exit from the hotel, our actual flight from El Cuervo was rather uneventful. 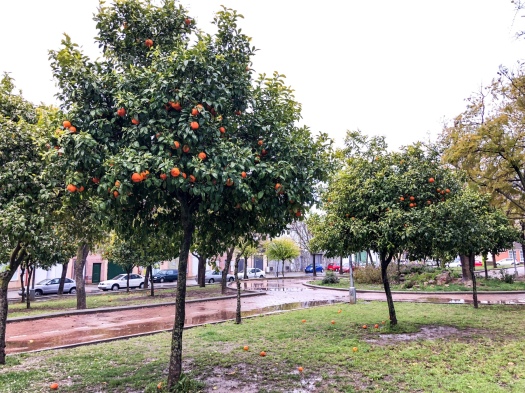 Even the orange trees in the park seemed as normal as could be. Yet, Mikey swears that had he known then how sour the fruit he picked would turn out to be, his butt would have been on the next train to Sevilla before ever stepping foot onto the Camino Agusta on that Friday the 13th!

Perhaps all tragedies begin with hopeful optimism: Julius Caesar dresses with the morning sun and prepares for a slow day at the Forum. Next thing you know, bam! “Et tu, Brute!?!”

The skies were somewhat hopeful, but we should have known better.

For the first time, even, the path was rather well marked.

Sometimes it was doubly so!

Still, this first water blockade should have sent up red flags. Instead, Mikey was feeling somewhere between grateful and smug for having packed and worn his gaiters. A trudge through the side growth? Tallyho! A jump over a flooded channel? Why not, indeed?! Yet, even without ongoing showers, we should have suspected that such flooded fields would later cause inconsolable grief.

The Camino Agusta had thus far been rather solitary insofar as we had not seen any other pilgrims – not one. Ergo, Mikey decided to document a few ”friends” we met along the way.

But the way was long and flat. In fact, it was pretty boring until the wind and rain really set in.

Please do laugh at this absurd 2018 American version of Don Quixote. Although the rain and major winds had momentarily abated, Mikey wanted to document this farcical moment on the Camino wherein he was probably the most desirous lightening rod in sight.

Now, the above is (albeit both highly rambling and impromptu) a fairly factual teaching moment that our pilgrim stumbled upon – quite accidentally. It’s like that one time in friendly conversation when a random subject of which you happen to be an expert arises? Yeah, Mikey is (oddly enough) well versed in Spanish law regarding irrigation and property rights concerning access to water and other natural resources. Go figure!

The above is what Mikey’s shoes and gaiters looked like before the swamp. There exist no photos or video suitable for public dissemination concerning what transpired during or after this segment of the Camino Agusta. Perhaps Mikey’s therapist will one day share more details following his death, but for now, Mikey provides the following narrative concerning the last stage of that day:

It was Friday the 13th and our valiant pilgrim had just rounded the turn from the irrigation canals. He could see on the horizon a magnificent city on a hilltop – not far from where he was just now.

As brave Mikey began to cross a bridge, he heard an old man shout out and frantically wave from afar. ”Ah, so kind are these local villagers and pious to recognize a humble pilgrim such as I,” said Mikey as he waved in response to the old man’s homage.

Just stepping off the bridge, our gallant hiker found his left leg swallowed mid-calf by a mire so chalky white and as thick as modeling clay. Encouraged by the old man’s continued applause in support of his efforts, Mikey waved back and heaved himself onto a nearby rock. This process of stepping into quick-clay and moving as fast as possible became something of a rhythmic routine the further into the mire and farther away from his most frantic supporter Mikey went. Some parts were better than others and our hero chose his steps carefully. Still, the next half-mile would take one and one-half hour to traverse.

An hour had passed into the ordeal when our intrepid traveler found himself in the middle of a creek, hopping from one rock to the next. Suddenly, there appeared a mutt of some roughly labrador lineage who ran up from nowhere and began to verbally harass our hero. Trying to remain calm, Mikey the Patient quietly rebuked the beast as he made his way onwards. Still, our benevolent pilgrim could not have known how this cruel beast was merely manipulating his trajectory and leading him onwards into a trap.

Finally reaching dry land, Mikey gave a quick salute to the heavens and walked onwards to a sheep stable upon which was marked a golden arrow. Yet, not since Daniel and his relatively minor predicament has another upright devotee witnessed a similar den of such unwarranted perdition. Yes, it was here, dear reader, that 3 other unchained beasts joined the hellish pack and encircled fair Mikey. On cue, three other (thankfully chained) demons yapped at his heals – almost breaking their chains, if not necks, in the process of evil. Still, our brave pilgrim progressed slowly to the road, looking never too far in either direction save straight onwards.

Yeah, so Mikey got bogged down in a literal swamp for over an hour and got harassed by 4 really big and intimidating lab/mutts on a farm. It was truly terrifying, but he was much less of a conquering hero than he might lead you to believe. Rather, it was more of a Daniel moment insofar as that guy had to change his pants the next morning, too. 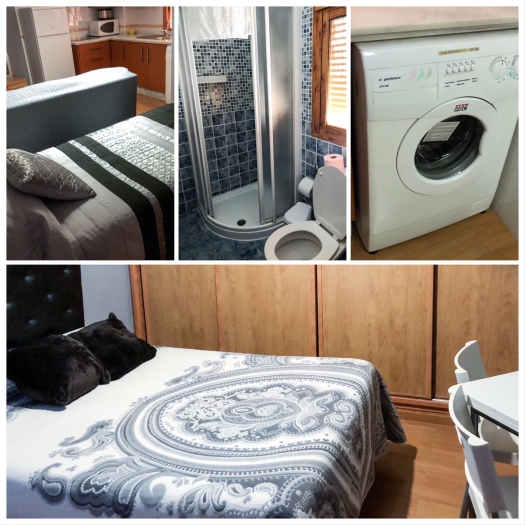 The best part of the day? We got an apartment with 2 beds, living room, bathroom, full kitchen, and our very own washing machine. Oh, and there was a full 3rd story sundeck looking out on the city. All for 20€?! Damn the sights, we’re ordering in tonight (and doing lots of laundry!)