We woke up this morning following a long night’s sleep. Mikey is rather sunburned and hobbling now due to a blister on his right Achilles’ heal and another dime sized one in the middle of his sole. The washing machine in the apartment was great, but his socks were still a bit damp this morning so this oversight is probably the culprit.

But back to Seville! After a hot shower and soak, we triaged the foot and headed down for coffee and juice at an outdoor patio just across the street. Since we stayed at one of the last affordable hotels, there was little say concerning the neighborhood. Ergo, it was about an hour’s walk to our originally planned hostel so Mikey was a bit apprehensive.

Along the way, we encountered what would come to be as common as cars – horse carriages. Yes, Andalusia is known for horses, but there are literally tens of thousands of equine employees in Seville. Surprisingly, they are not just for the tourists. 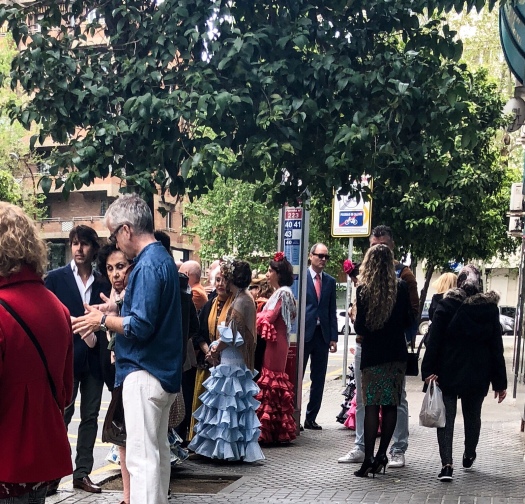 What we had forgotten was that this was the April Festivities week in the city wherein women and girls dress in Flamenco attire and men and boys dress in coat and tie. (Mikey was wondering why so many guys were dressed in suits on the commuter train last night.)

Considering that the festival was this week, there were probably more carriages out, but it was refreshing to see such traditional attire and transportation.

Now we do not mean to imply that Seville is in anyway a backward city. Rather, it has a pretty advanced fleet of subterranean and light rail trains. Still, its infrastructure is lagging to the point of frustration when attempting to traverse the city. Perhaps this will change as Sevilla continues to grow.

Oh, here’s one for you – Mikey almost doubled over laughing at this. Do you get it? It’s The Barber of Seville! (Ok, that was a bit of nerdy opera humor.)

After checking into the planned hostel and settling in, we grabbed a bite to eat and then tried to go to the Cathedral of Seville. That didn’t happen. The line was 2 hours long and last Mikey checked, there were no crazy loops or a waterfall at the end of that ride.

Plan B: we went to the Church of the Divine Savior. Although impressive in its own right, one can purchase a combo ticket for it and the Cathedral (with no waiting at the latter.) As visiting hours for cultural sites are very limited on Sundays, we really only had time to see this church today. Still, it was well worth it.

This is the main altar of the church. It was built during the height of the Spanish Empire when there was no shortage of gold coming in from the Americas. 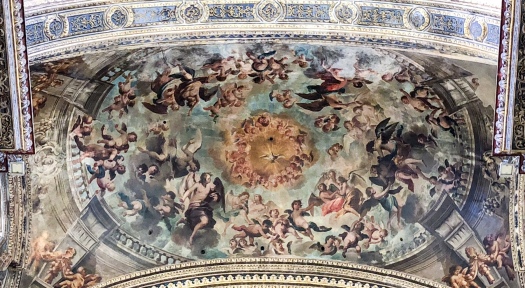 Considering all the gilded carvings in the last image, you might not have noticed the powder blue columns typical of the Rococo style. The image above depicting the Holy Spirit surrounded by a heavenly court is located in the altar’s vault. The use of pastels (indicative of Rococo) is a major stylistic departure from the severe primary colors of Baroque art.

Even the interior of the central dome is accented with soft pigments.

Of special note to us were the matching pulpits with their scallop-shaped soundboards. Yep – we learned that one today. Apparently, these canopies aren’t just for show. Instead, they help direct sound outwards to the congregation which is important considering all the vaulted ceilings.

This was just a neat looking Palm Sunday image of Jesus on a donkey. Given the equestrian obsession in Andalusia, extra care was given in sculpting the donkey.

This is a silver and gold base onto which a pasó or sculpted tableau will be placed for the Holy Week processions. If you remember the one we saw in Cadiz, this one is similarly ornate, just not pure silver throughout.

This Virgin Mary reminded Mikey of a boss he used to have in LA. She was a joy to work with, but had a similarly stern expression until her coffee kicked in. (Hi, Andrea!)

We finally found an open missal to show you the size of the shared hymnals and prayer books. This one is almost 3 feet high.

Mikey really liked this statue of St. Christopher, the patron saint of travelers. Did you know that Christopher means ”holder of Christ?” So guess who he’s carrying?

Mikey’s not sure how much the Christ-child weighs, he hopes his legs will look this good after lugging a 25lb pack across Spain. 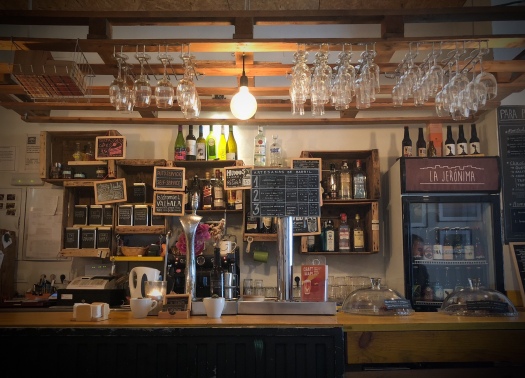 Ever wonder how the proverbial sausage that is this blog is made? Well, let’s just say that it involves a good bit of work in cool spots like La Jeronima. Local craft beer + free wifi = writing spot for Mikey. We hung out here for a couple of hours before dinner.

Of course, we ate more, but the fried baby squid and onion peals were a real hit. Mikey just hopes he doesn’t snore too heavily tonight or we’ll all wake to one foul smelling dorm room!