Last night was a little bizarre. We stayed in an albergue (as usual) but were alone in a dorm room that could house 18 pilgrims! Apparently, no one else showed up and it just worked out that way – but, we did catch Mikey sniffing himself a few times just to make sure. 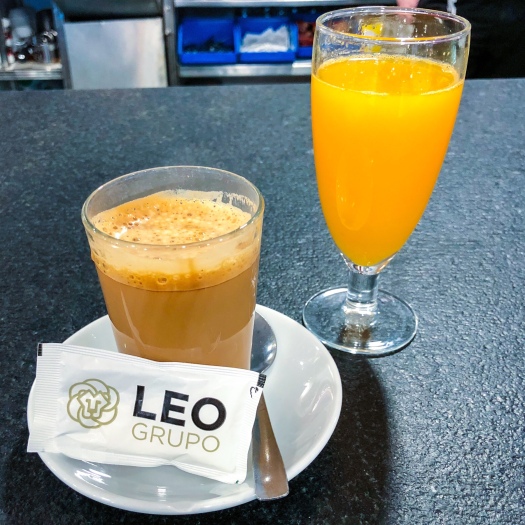 After such a peaceful night, it was hard to leave the bed and begin the day’s hike. Coffee sure helps and most cafes in Spain have an orange juicer behind the bar so that’s always a plus.

From experience, Mikey finds that a café con leche (basically a long shot of espresso with steamed milk) and fresh orange juice is the best hiking breakfast. It has the right ratio of caffeine, sugar, and fat to get us going, but nothing too heavy that might weigh down our intrepid hiker. 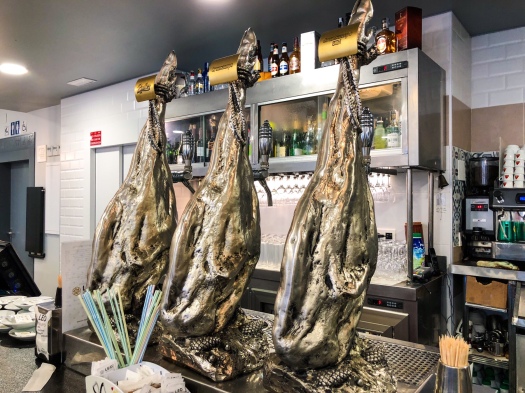 OK – it was too early, but yes, those are metal jamón hock beer taps! Mikey wonders if seeing one’s beer flow like juices out of a ham has a psychological effect on its flavor. 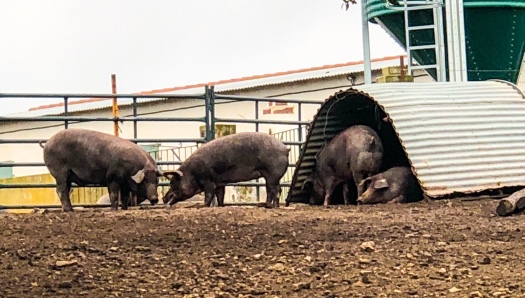 We do realize that all this pig watching may begin to have negative effects on our ability to enjoy so many of the pork products for which this region is well known. But, gosh darn it – they play around like chubby little puppies! 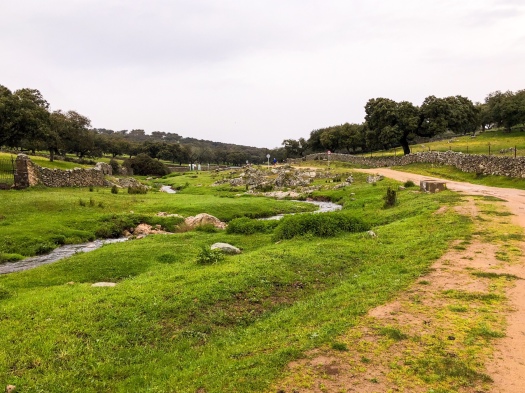 Focusing away from the pigs, we really enjoyed the crisp morning air and a section of the walk that ran parallel to a now swollen creek. It wasn’t raining now, but the remnants of an overnight storm still hung in the air.

Now that’s a look! Sorry to disturb your breakfast.

This group was fun.

Most of the day was uneventful and stayed well away from major roads. While there were no castles and far fewer animals, it was a wonderfully overcast and cool walk.

We arrived just after noon at our lodging for the evening – a restored 16th-century convent. According to Mikey, staying too often in places like this can become habit forming – wow. 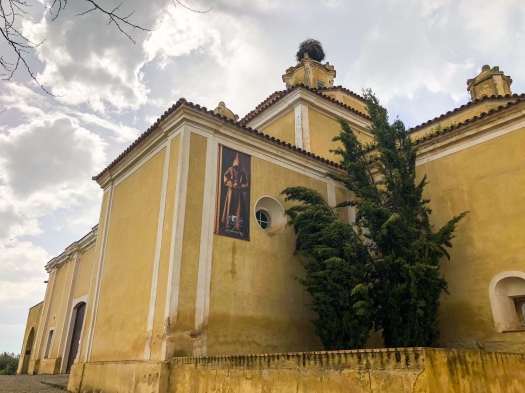 An interesting factoid about this convent is that the famous Spanish painter Francisco de Zurbarán was born here. For those of us unfamiliar with Zurbarán, he is regarded as the “Spanish Caravaggio.”

Although better known for some of his other works, Mikey’s favorite is Agnus Dei (Lamb of God). Zurbarán painted 5 of these for different patrons and Mikey has seen the above version at the Prado Museum along with a haloed version at the San Diego Museum of Art. (Both are part of their respective museums’ permanent collections so go check them out if in Madrid or San Diego.) 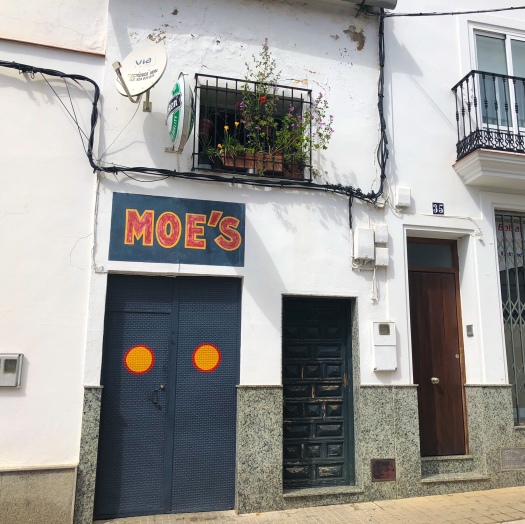 Speaking of art imitating life and vice-versa, there is a Moe’s Bar in the town. Oh, and The Simpsons is on cable at 2 pm daily.

We made the obligatory trip to the town church (also 16th-century), but it was closed. 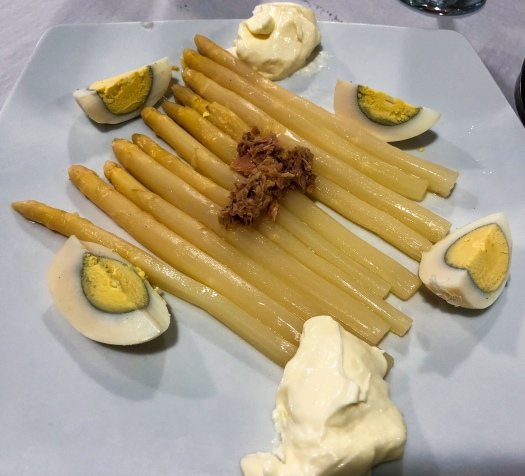 Then, it was time for a late lunch. We started with a salad and then had a very typical Spanish first course: white asparagus with mayonnaise. If you’re wondering, that’s a bit of tuna on top and it’s often served with hard boiled eggs.

A little further left-field was our main course of pig tongue and fries. Yeah, Mikey was thinking the same thing, but it was probably the most adventurous dish on the menu, so he had to go for it. Flavor was definitely good, but the texture was a bit odd. Still, it was a fun and tasty dish.

Speaking of tasty – the restaurant even made its own ice cream! Mikey was torn between strawberry and lemon, so they just mixed them for him. Heaven.

Like many of the small villages we pass through, there really wasn’t a lot going on in this town. That coupled with the rain made for a relaxing evening at the convent with a good ebook. Hey, not every Saturday night has to be crazy! Hasta entonces.