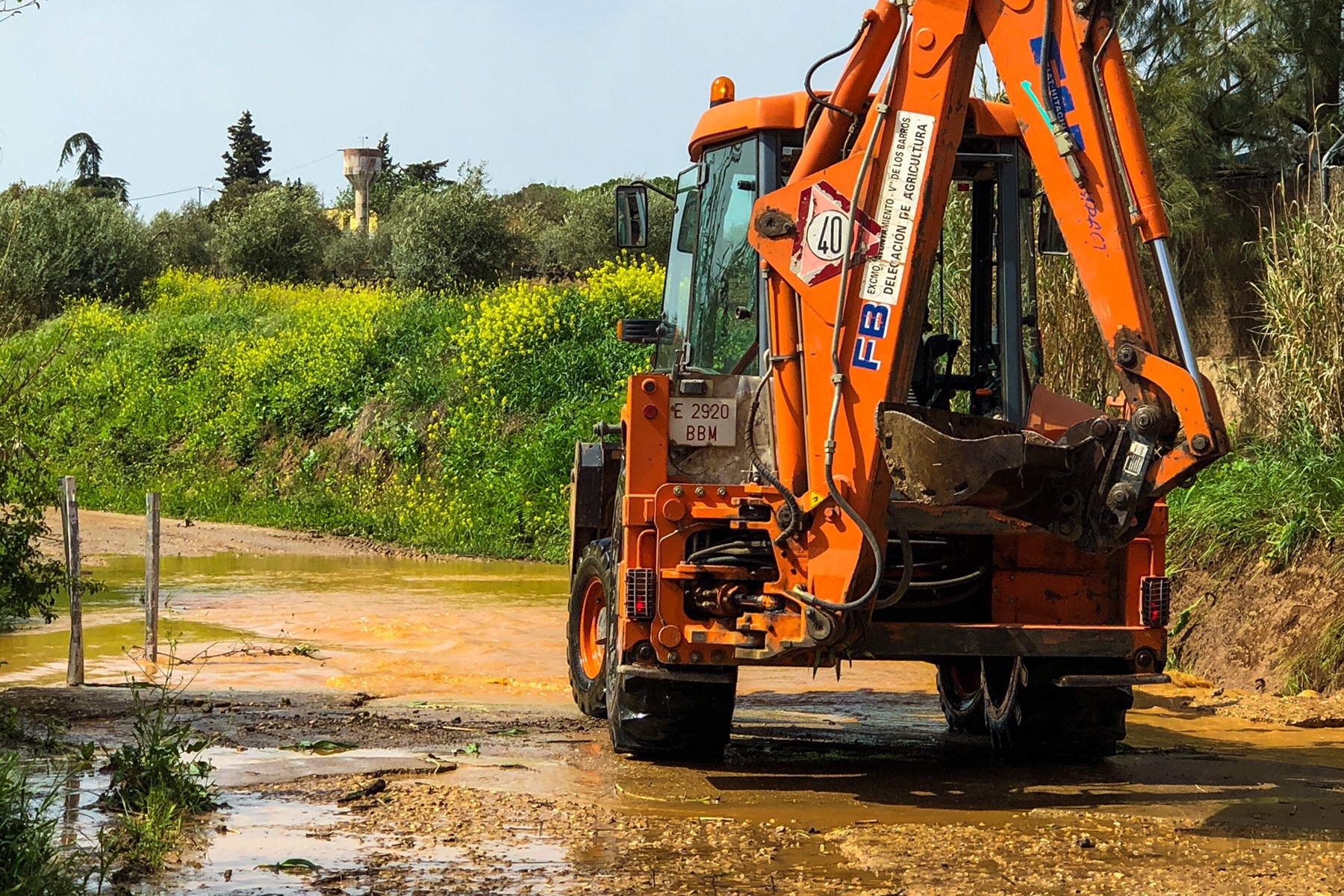 Zafra turned out to be quite a nice town. Our “discovery” of a castle and the eccentric owner of that restaurant made for a fun time. The nuns (even though Mikey has a morbid, albeit totally unsubstantiated, fear of such orders) had offered a very relaxing experience and the hospitalero even shook Mikey’s hand and asked to take a picture of him on the way out.

Perhaps it was on such a high that we left the albergue and totally missed our turn. Yep – already lost even before leaving the town. Well, an older lady saw Mikey’s backpack and crossed the street, headed sternly in our direction. Her finger-wagging, she quickly righted us and (seemingly) lit a fire as Mikey’s pace doubled immediately. (He swears she was a retired nun.)

We did happen upon this fountain but equated the sign and trough with something more suitable for cattle. So much for having a quick drink before hitting the road.

Dawn was breaking through the clouds as we passed the Torre de San Francisco. A 16th-century defensive tower, it marks the town border after which we were on our own in the countryside.

Following a rather steady climb out of the town, we finally reached a beautiful vista from which we could see the village of Los Santos de Maimona. 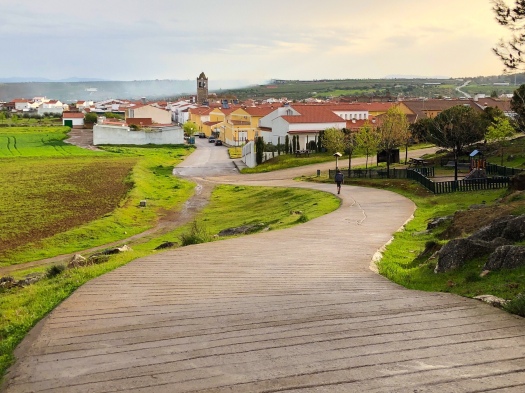 It really was quite a nice morning to walk downhill into a little village.

The town has a wonderful church situated at pride of place in the center with the usual orange and palm trees. Much of that is a holdover from the time of Arab rule. Built in the 16th-century, it was constructed in a gothic-renaissance style.

As we stood with a few other pilgrims admiring the main entrance, an old woman shuffled up to us and began talking about the church. What she was most proud of, it turned out, was that “the church had not been washed since the day it was built!” Mikey decided that whether or not this was true, from the looks of her, she would probably know.

And there was a side door – not quite as ornate, but it has a pretty cool monkey at the top. An interesting aspect concerning Catholic churches is their sometimes bizarre decorations. (We’ll speak more of this when we get to Salamanca in a week or two.) But, for now, it was a quick coffee at the old folks’ hall and then back on the road.

A lot of the ground was still soft from the rain, but the sun was out in force today.

We did happen upon some pigs at yet another farm, but were saddened that they were penned up instead of free-ranging like the “little piggies” that eat the acorns and grow tasty. 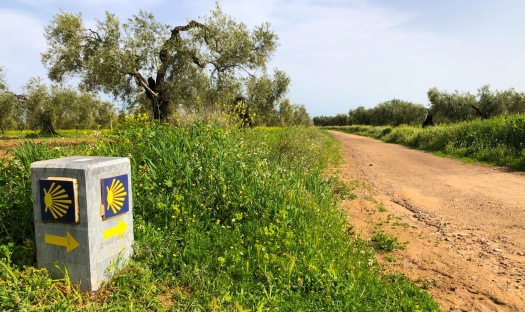 We’re now starting to see more of the traditional Camino markers made of stone and outfitted with the scallop shells. These are a lot more common on the Camino Frances where there are exponentially more pilgrims and, as such, a bigger budget from which to erect better signage.

Well, there’s one thing that other Caminos haven’t offered us before – a ride on a backhoe! It’s hard to see from this angle, but as we approached part of the path quite near to today’s destination, we found it to be completely flooded with a fast-moving river of muddy water almost 2 feet deep.

This was not something that was passable on foot, so as we waited and consulted Google Maps in hopes of finding an alternative route, a guy on a backhoe came down the opposing hill waving his arm. He forded the stream and pulled up beside us to offer a ride. He was a very nice farmer and we had a good conversation for the 30-second ride across.

From there onwards, it was just vineyards on both sides of the road for as far as one could see.

No, really – just vineyards! Like, that was all. Mikey began to channel Coleridge’s Rime of the Ancient Mariner as he parchedly chanted, “Wine, wine everywhere, nor any drop to drink.” Yeah, we think these sun-drenched days may be getting to him.

But, there it was – the giant bottle marketing sign that was also of no use. Grrr. Well, at least we had arrived at our destination and could now find our hostel, fresh water, and food.

The first two were uneventful (although a completely disrobed Mikey handing the hospitalera the last of his dirty clothes out of the bathroom door was a bit different), but now we were on a mission to find food. With Mikey confident in our host’s recommendation – he believes that anyone entrusted with cleaning his underclothes can be relied upon to recommend a lunch spot – we headed next door to the senior center for a 6€ meal.

OK – for 6€, it was a good deal. But let’s just say that no teeth were needed for the consumption of this soft-food meal. It did consist of white wine, an aperitif of green olives, Cuban rice, stewed Rapé, and coffee.

In case you’re wondering, the pronunciation of Rapé is RAH-pay and this is what the delicious monkfish looks like! If its name or looks don’t immediately thrill you, the positive bit is that one can enjoy it with or without dentures. Bon appétit!

After lunch, we took a long walk about the town. Let’s just say that this town takes the siesta seriously. While most villages shut down between 4 and 6-8pm, there’s always a place to grab a soda or at least some sign of life. Not in Villafranca de los Barros.

So, we sat on a bench to admire the 16th-century Church of Our Lady of the Valley until a high school couple arrived and occupied the adjacent bench where they began a full-on necking session. OK, we understand that public displays of affection are more common in Spain, but right in front of our Lady of the Valley?!? Come on!

So, we left the lovers to the churchyard and walked down to one of the town’s three wine collectives. Have you ever had that great Napa or Sonoma experience where you visit a gorgeous visitors center, taste a number of wines, and maybe pick out one or two as gifts to bring home? Yeah, that’s something that happens in the state where they also have Disneyland. Spain had the fascist dictator, Franco. As such, our sunny expectations were pretty much doused when the woman behind the register asked what we wanted and proceeded to pour a wine from a box when Mikey asked nicely if he could try a wine prior to purchase. (And this is when we ran for the door.) 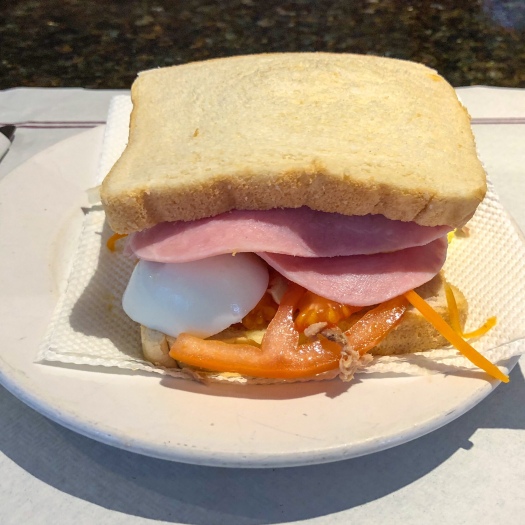 Following a relaxing nap at the hostel and laundry folding party, we went back out for dinner. Still, with all the heat, it’s pretty hard to eat much. So, the nice lady at a fancy hotel bar finally looked at Mikey struggling over the elaborate menu and asked him if he’d just like her to make him a sandwich. Yep, it was probably one of the simplest and most tasty evening meals we’ve had. Thanks, surrogate Spanish Jewish mom!

Following a nightcap of coffee with milk, we headed back to the hostel to get ready for bed. We’ve got a 5:30 am wake up call in the morning, so no messing around tonight. See ya later.