Due to a horrible Italian snorer, we were allowed to move (along with two other pilgrims) into a nice private room last night. This was probably one of the better nights of sleep thus far in an albergue.

So, we awoke very refreshed and even took a British man up on his offer of tea. You see, for the last two days, we’ve been having fun with a rather posh pilgrim from Wales who carries not only very specific English teas but individual milk packets. Simply put, David could out-Brit the Queen!

Although Mikey’s palate is not too discerning when it comes to tea, he did enjoy passing through the old part of Zamora where no one was yet stirring. Once in bloom, these conjoined trees will form a shady canopy covering the square, but we plan on being long gone before this is needed.

This morning was actually quite brisk and we shivered a bit on our way out of the walled city.

And then we passed a literal pile of s___. Yep, the farmers had stacked up heaps of dung in what we can only surmise to be intended for future fertilizer use. Interesting – once we were finally upwind. 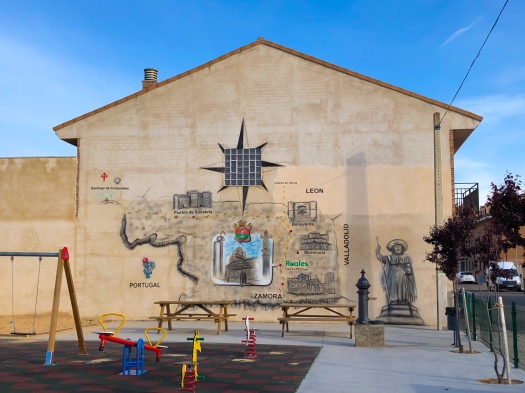 After walking a bit through farmlands, we encountered this map mural in a very sleepy village. While we are still on the Via de la Plata Camino, we will soon begin a westward journey towards Santiago de Compostela on the Camino Sanabrés. 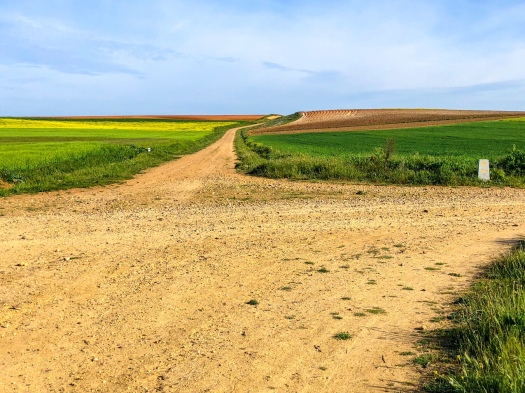 Although we will soon enter the mountainous forests of Northwest Spain, for now, we remain in the flat farmlands of Castile y León.

Following a rather uneventful walk, we arrived in Montamarta just in time to have a wonderful lunch with two pilgrims – one from France and the other from Australia. Thankfully and seemingly for the first time, we were not served fried potatoes so Mikey was unable to make his “freedom fries” joke. 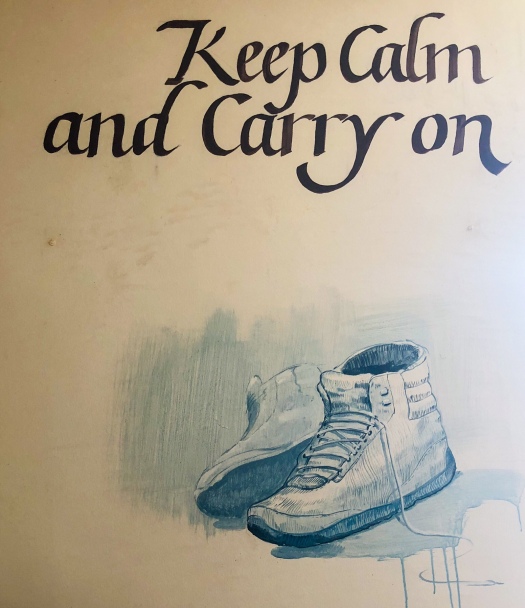 He did make reference to the British “stiff upper lip” when we encountered this tacky wall art.

Speaking of art, this statue of El Zangarrón (a local masked figure who roams the streets of Montamarta between January 1 and 6) was given pride of place in the town square.

Well, this was the extent of the town square, so it wasn’t that much of an honor. 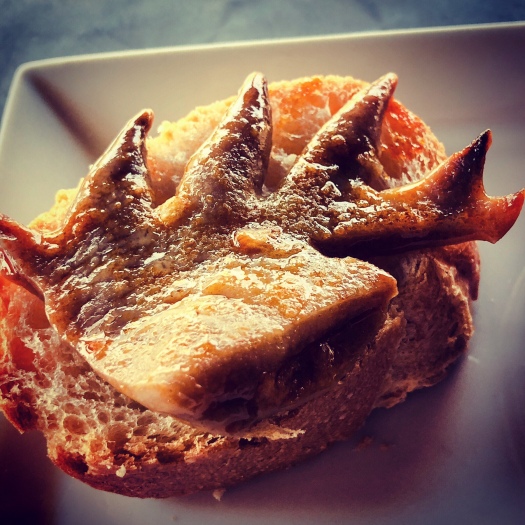 It was, however, Mikey’s honor to try a tapa of pan-seared rooster comb. Yep – he couldn’t believe it either. Probably not the best dish in the world, but it was just something he had to do.

And with that, we bid you adieu. Hasta entonces, dear reader.