Today began much better than the previous. After coffee with a couple of new-found Irish friends, Mikey headed out of town for a brief walk alongside the highway.

From the very start, the path was well marked and (most importantly) dry! 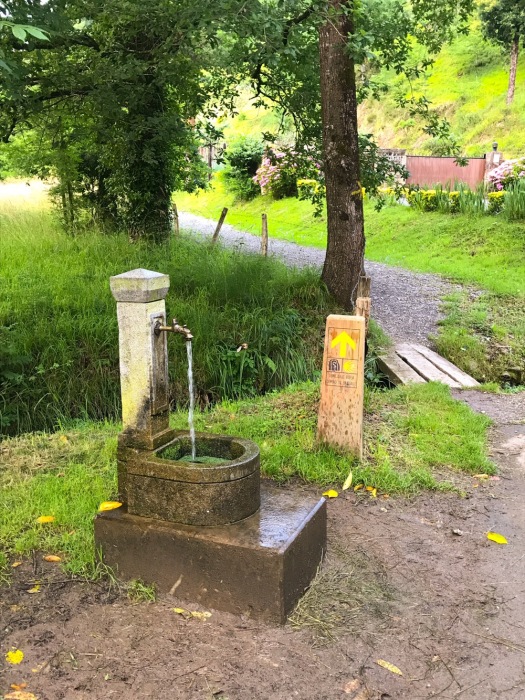 Still, Mikey stopped to empty and then refill his water bottles with fresh mountain water. While most northern pilgrims have learned to always top-off at any spring/faucet we pass, these mountain fountains are simply delicious and warrant dumping whatever is in the bottle and replacing it with this.

Speaking of water, a good hour was spent walking along a fast moving creek.

We walked through a forest for a bit and were really blown away by how red the bark was on these pines. Mikey remarked that they looked photoshopped. One Irishman replied, “I’ll bet they spray paint them at night just to mess with pilgrims.” To which the second and more sarcastic Irishman added, “No – they’re probably just diseased. Don’t get too close.” Jerk. 😉

A little while later, we visited the Monastery of Zenarruza.

Although the doors were locked, we stood outside for a long time listening to the monks singing inside. It was really beautiful.

The day was definitely scenic, but there would be only one village where we could buy food.

Well, Mikey ignored the Irish humor when he questioned a cafe owner as to what this pintxo could be. “Leek,” she replied. Only after devouring it did Mikey further inquire. Apparently, it is a leek custard cooked much like Spanish flan. So, leeks, onion, garlic, egg, and heavy cream. Let’s just say that if any of you can figure out a recipe, Mikey will bring the wine! Delicious.

We spoke about the village games wherein the oxen pull a large stone across tbe square, right? Well, Mikey had to try his hand at this. For the record, the 800kg stone didn’t move an inch.

Carrying on through the mountains, we happened upon a known group of pilgrims enjoying one of the many streams. While tempting, we kept going as Gernika lay just a couple of miles further.

We arrived at the youth hostel mid afternoon. (Although Mikey swears he’s young enough to stay there, youth hostels along the Camino permit pilgrims of all ages to stay for one night.)

Anyways, we relaxed on the rooftop terrace with a San Miguel and some fresh local cherries. Complete bliss!
Once rested, we picked up a couple of American girls and headed into town. Haha – sounds very different now that I’m writing this! Actually, Mikey had been telling everyone about historic places to go in Gernika and two American teachers from Utah decided to tag along.

The current “Tree of Gernika” is a descendant of the line of hardwood trees that the Basques have been meeting under for thousands of years. Behind it is the original meeting house and in front is a noticeably burned Mikey.

Encased by pilliars is the former Tree of Gernika. But, as one of Mikey’s newfound Irish mates remarked , “Yeah, any tree’d die if ya built a bloody building ’round it!” Really starting to like these “blokes.” 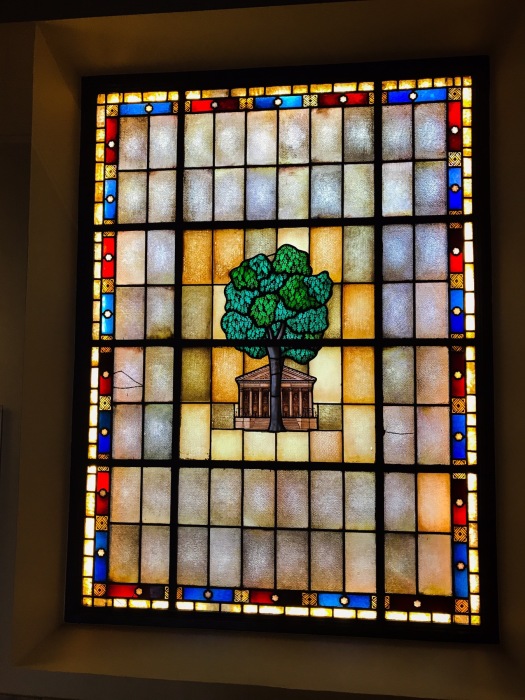 This is a stained glass rendition of the former tree.

And there is a huge ceiling stained glass rendering of the tree inside the Basque Assembly House. This is literally the entire ceiling in a large room!

Oh, and this is the chamber where the Basque Parliament meets.

Gernika is most well known outside of the Basque Country as the site of the massacre depicted in Picasso’s “La Guernica.”

While the original is located in Madrid, this copy in tile is displayed near the Gernika Peace Museum. 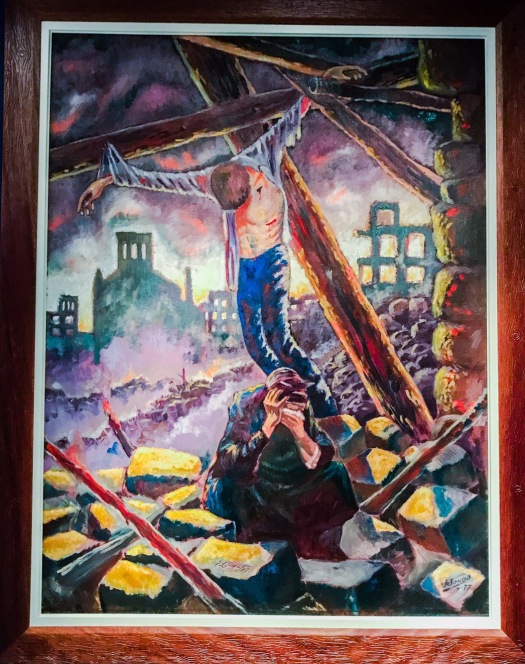 Among a plethora of moving artwork and artifacts, “The Gernika Christ” by Luis Iriondo (1977) is very telling of the people’s lingering reaction to the atrocities of war.

Not to diminish the gravity of what we saw, but it was getting late and the leek custard was long gone.

The Irishmen and honorary mick, Mikey, enjoyed a meal of roasted 1/2 chicken, fries, salad, and roasted peppers. It was well worth the wait!

OK, so this post came out much later that I had anticipated. If you’re familiar with the story of Gernika then you know how emotionally intense it would be to visit the town. Much like other sites of mass murder, it takes some time to process exactly what happened and how we humans can do this to each other. I purposely have not provided a synopsis of the events of 1937, but encourage all to research this on your own.

On the positive, we’ll be visiting Bilbao tomorrow and taking a much needed rest day! Until then…