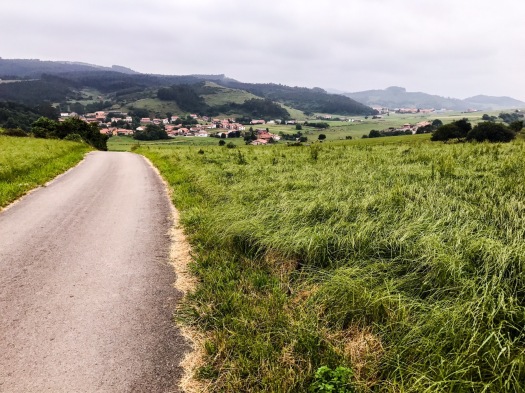 Today’s hike was all pavement. While that was a bit tough on the feet, the views coming out of Santillana were rather stunning. Also, It rained a bit last night and so the day was overcast and cool. After yesterday’s 90+ average, 68*F was so welcomed! 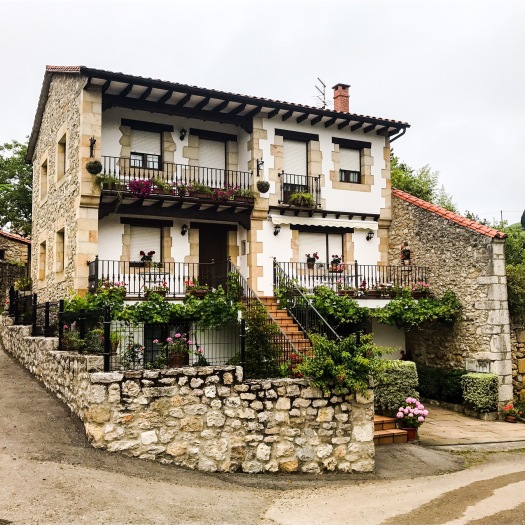 These Cantabrians really take pride in dressing up their homes with flowers and other plants. The architecture here certainly has some similarities with that of the Basques, but is also very distinct. 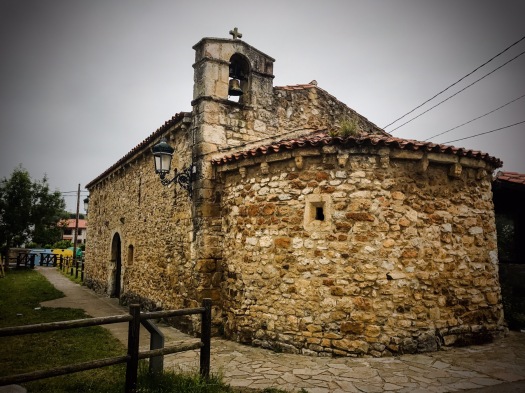 There were a few churches along the way like this 11th century Hermitage of Saint Bartholomew. Oh, did you know that he is the patron saint of tanners? I guess that’s fitting given that we’re in cow country, but considering his martyrdom (flayed alive), Mikey finds it a bit macabre. 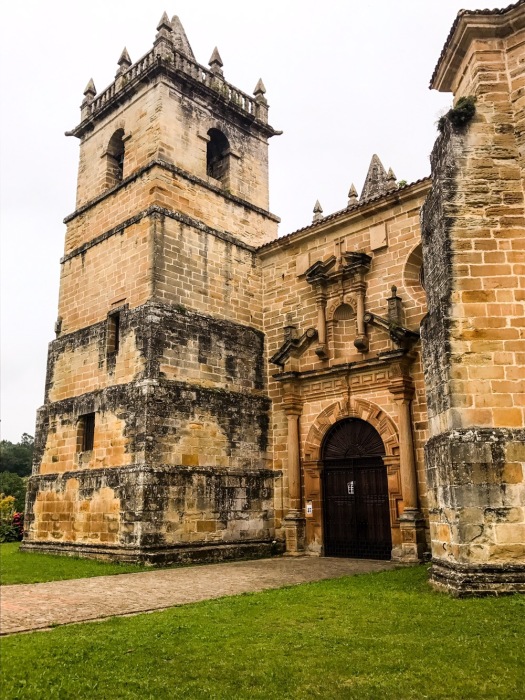 This “newer” 18th century Church of Ciguenza was really beautiful.

Also more contemporary is the 20th century Church of Saint Peter in Cobreces. It’s supposed to be neo-gothic, but really stands out in comparison to what we’ve seen thus far.

One of the more interesting sights today was agricultural. This shot is more of the end result, but Mikey watched several different stages today from cutting and raking to baling and wrapping. Of course these were in different stages and on different farms, but since the local schools have let out for summer, it was literally all hands on deck with these farming families.

​Speaking of farming families, here’s your cute animal video of the day. This mother and calf were out in the pasture with the extended family today.

Guess it was lunchtime for everyone.

So, Mikey stopped in for a tortilla española. This is becoming quite a staple for him. I mean, protein from the eggs and carbs in the potatoes, bread, and (sometimes) beer. It’s almost the perfect Camino food!

Well, getting back to the camino, after lunch the path finally meandered around to the ocean. Where were these chilly ocean breezes yesterday when we needed them?! 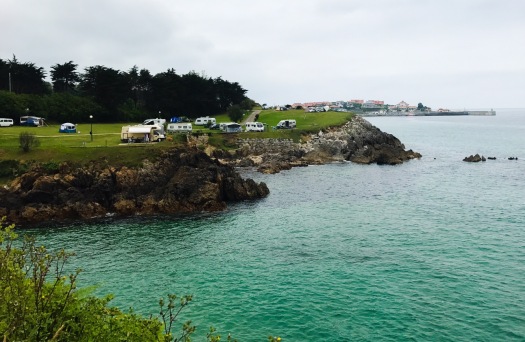 It was really cold and overcast as we got to our day-end destination: Comillas. But, guess what? The albergue was full.

So what’s a pilgrim going to do? Well, the next pilgrim albergue was 3 hours away and it was already 3:30pm. Mikey was really starting to stink and needed to do laundry, but a 6:30pm arrival would be cutting it close. Hmmm… 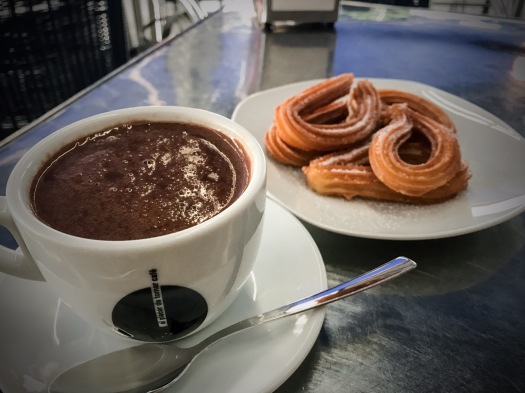 CHOCOLATE CON CHURROS!!! Yep, they’re kinda like a cure-all for life’s ills. And if our pilgrim is to continue another 12km, then he’ll need something besides that tortilla española and a few bits of wild boar chorizo he has squirreled away in his pack.

As Mikey began to happily devour his sugary therapy, it started to rain. Well, that was the final churro that broke his… (ok, there was a straw and camel allusion there that just didn’t work out!) Anyways, the rain didn’t last long, but he found a hotel just around the corner and set in to do his laundry in the bathtub.

Wait a minute – you’re probably wondering how pilgrims wash their clothes, right? Well, mostly there are sinks and lots of swishing, rinsing, and wringing. Mikey prefers finding albergues with washing machines and just paying for a good wash. Today, it was dish detergent (lemon scent) in a bathtub. He agitated the load with both arms and got a pretty good 15 minute upper body workout while listening to some upbeat music.

This was followed by careful rinsing (although the advantage of dish detergent is that it doesn’t itch if not rinsed thoroughly) and a lot of wringing. Since the hotel room came with lots of towels, Mikey rolled each piece of clothing up in a towel and started jumping on it. (Again, this is where the upbeat pop music comes in handy.) Now just open a few windows, raid the closet for hangers, and – voilà!

Having now aired his clean laundry to most of Comillas (and now anyone who stumbles on this site), it was time for Mikey to hit the town.

First stop: the Marquis of Comillas’ summer home. Yeah, the Palace of Comillas is a really amazing building. 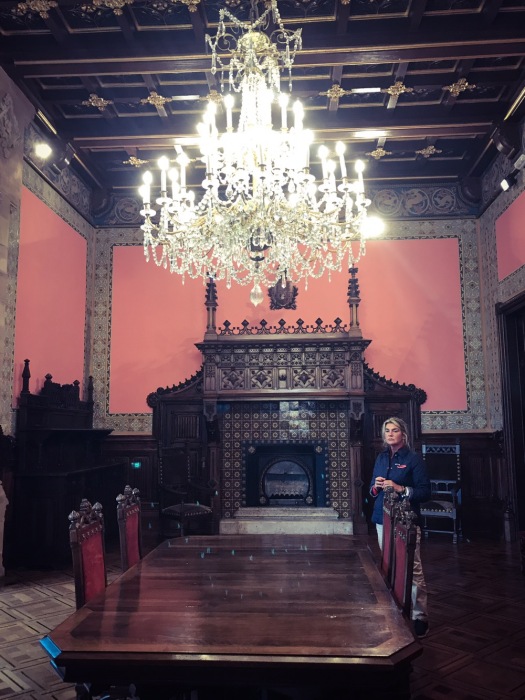 Although Mikey didn’t get the dinner invitation, the creepy looking docent claims that this table expands to seat 40 diners. Oh, and the reall cool part (or hot, rather) is that the kitchen is 2 floors above and the servents would bring it out from the doors on either side of the fireplace. It’s good to be … marquis!

But, this guy was pretty rad. He had a pool table that measured 10.5ft long and was the first in Spain to have electricity installed so that he could play pool at night.

This is the exit out to the gardens.

Oh, and his staircase totally beats Downton Abbey! But here’s the best part: the Marquis (then known as Lopez) was born into poverty in Cuba. His mother was a fish monger and he worked odd jobs before earning enough to move to Barcelona.

Once there, he married well and started an Atlantic shipping company. When Cuba started rebelling against the Spanish crown, this guy approached the king and offered to raise an army and send them west. 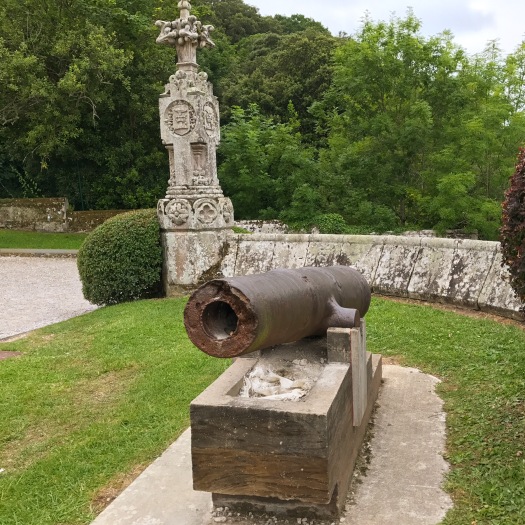 (A cannon used in putting down the initial Cuban insurrection.)

Although Spain would eventually lose both Cuba and the Philippines in what the Spanish call “The Disaster,” the king rewarded Lopez with a noble rank and he became the Marquis of Comillas. (Note to self: marry well and help out the boss!)

Well, even nobility needs lawyers. As such, the Marquis’ lawyer traveled with him and wanted a house nearby. Enter Gaudi.

This “summerhouse” was designed by Gaudi at the ripe age of 30. It is one of only 3 Gaudi buildings outside of his native Catalonia and really jump-started his architectural career. 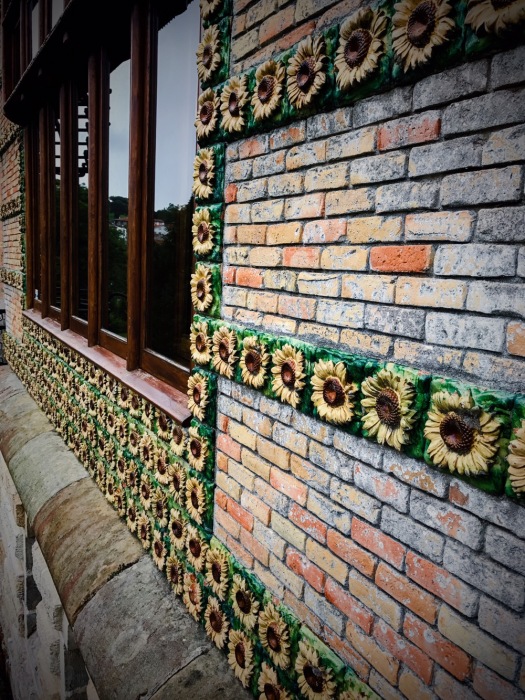 Apparently the customer really liked sunflowers as they are featured on the entire outside and interior design. I mean, I guess if it’s a summer home…

Oh, and the attic was pretty neat. Unfortunately, the house is nomlonger furnished, so it’s a bit of a shell walking through. Still, if you ever find yourself in Comillas, it’s worth a look. 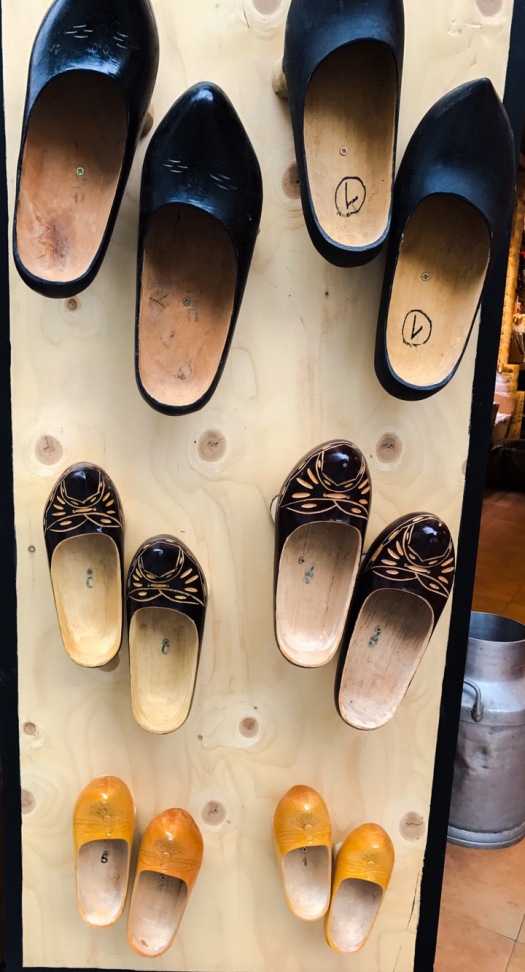 What Mikey does not recommend, however, are the traditional Cantabrian wooden shoes. Well, at least not for walking the camino.

OK, well that’s about it.

There was a seafood salad with baby eels for dinner but then it was off to bed and folding laundry at daybreak. Night, y’all!