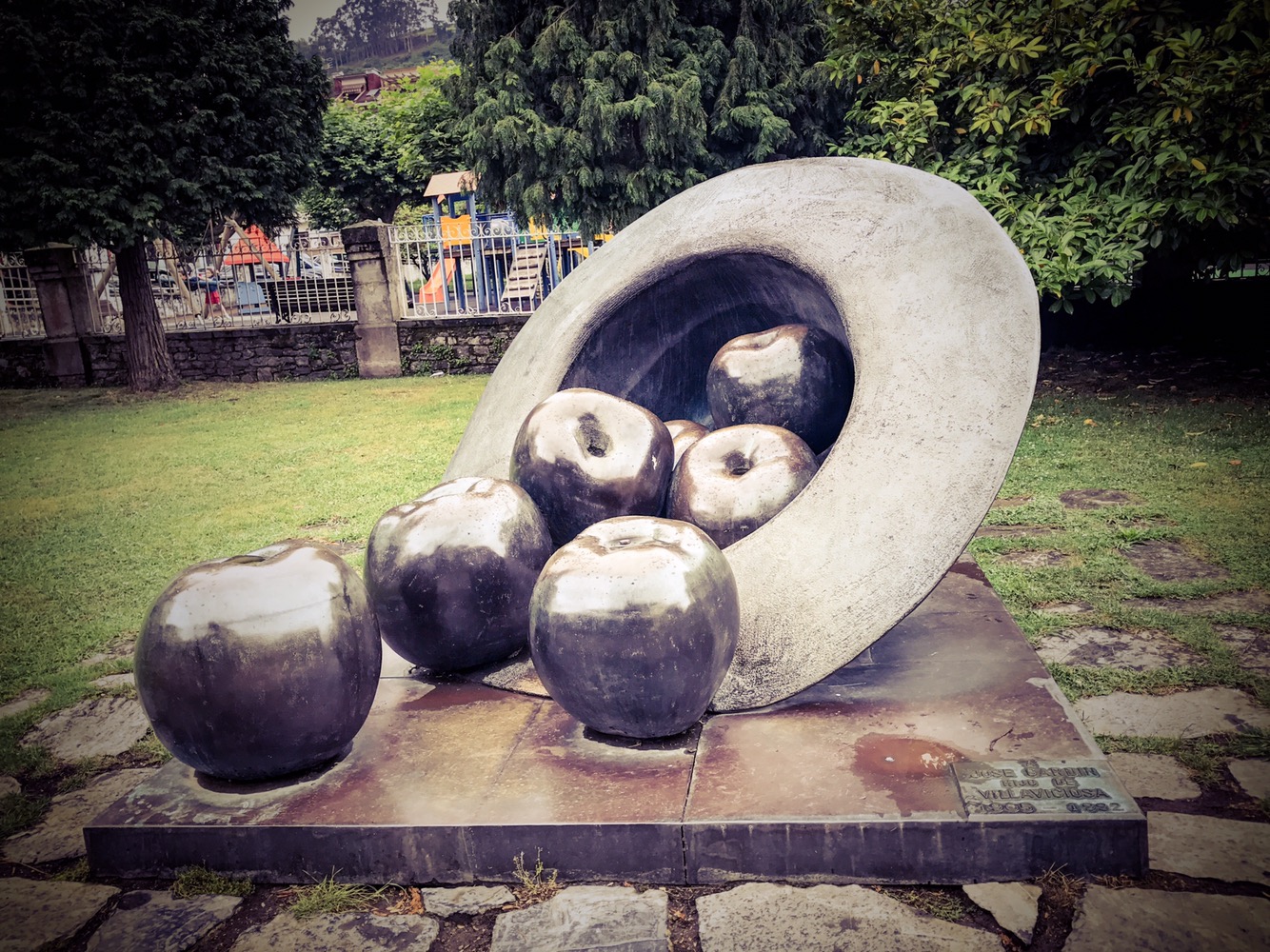 There is really nothing like going to sleep in a thunderstorm. The even pattering of the rain on the roof and the rolling thunder rumbling in the distance are things Mikey has grown to miss since moving out west.

When this is repeated the next morning, however, it is not as enjoyable. You see, it was not raining when we left the safe confines of the albergue. The thunder was a mere rumble far off in the distance. The sun even peeked through the clouds at times.

Stay on the path, Mikey thought. The arrows will guide you through and the storm should go the other way. Well isn’t our protagonist just the Pollyanna! About that time, the bottom fell out and Mikey donned his full “nunzilla” poncho.

OK, we’ll have to take a picture of this getup at some point, but imagine a billed poncho that covers the wearer and his backpack. Add a hiking stick and the end result is the look (from a distance) of a hunchbacked nun crooked over a cane.

Quickly separating himself from said poncho so as not to be put into clerical service, Mikey ducked into the front porch of this church to wait out the storm. Still, this village church only opens for mass at 7pm on Saturdays, so he needn’t worry.

Lemons to lemonade, it was quite the setting for an impromptu breakfast of apples, artisanal chorizo purchased from the village last night, and a Coke Zero. (Since he often leaves before cafes open in the morning, Mikey packs a can of Coke Zero in case he needs the caffeine fix.) 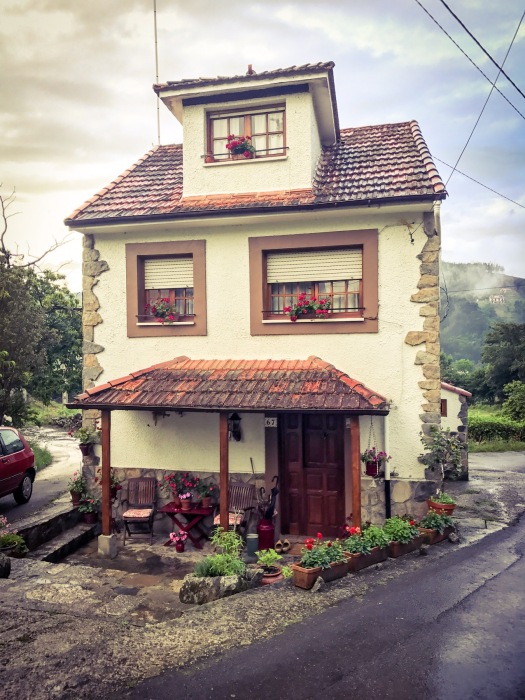 Back on the road, we passed this cartoonish looking house in a small hamlet. As Mikey stopped to snap a picture, it dawned on him  that San Juan de Luz wasn’t mentioned in his guidebook. As in there was no mention at all even in passing. You guessed it – Mikey was completely lost.

Compounding the problem of temporary displacement (Mikey insists that we refrain from saying “lost”) was that his 3gb of data on his prepaid Spanish SIMcard had expired. I know, too many picture and video uploads to the blog😉. Ergo, the maps application was useless and we had to wander around in the rain wearing the nunzilla get up while looking for a town that might have wifi.

Never found a place with wifi, but there was a really neat craft beer bar and the matron gave Mikey directions in wxchange for his purchasing a local IPA. Hey, it’s give and take out here on the Way!

As he sat sipping his beer under the front awning of the restaurant, Mikey watched the curious spectacle of a delivery unfold. Let’s preface this by admitting that Mikey really enjoys the process of things. For instance, pasta tastes good. But, the process of simmering homemade primavera sauce all day on the stove and rolling out flour and eggs into fettuccine noodles is much more enjoyable. 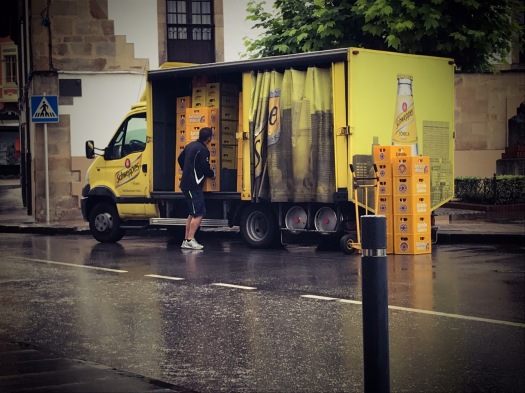 So here’s the senario: three guys get out of a Schweppes’s truck and begin wheeling out cases of empty bottles from the bar. After each make a couple of trips, they start wheeling in cases of full bottles. Now these cases are sodas, tonic waters, beers, liquor bottles – all types. Mind you, this is a small town, there are 3 delivery guys, and it’s raining. Mikey felt a twinge of Taylorism creep up as he witnessed such inefficiency.

And here’s the explanation: bars and restaurants in Spain have at most 3-4 beers on tap. Everything else comes in bottles – I mean everything else. There are no fountain sodas wherein a syrup pack and carbonated water are mixed and dispensed through a “bar gun” or soda fountain. Thus, if you want a Coke with your meal, the server opens a glass bottle and serves it with ice. Gin and tonic? He brings a glass of ice, bottle of liquor, and bottle of tonic out on a tray. The glass is set down, liquor poured in, and the tonic water is opened and placed on the table for the patron to pour.

All the empty bottles are later collected and sorted into the saved plastic delivery cases. These cases are picked up by the trio of delivery drivers who then figure out what they should leave behind. Inefficient? Yes. Job security? You betcha!

See – this is how we digress! Forgive me, dear reader, and let’s get back on the Way. 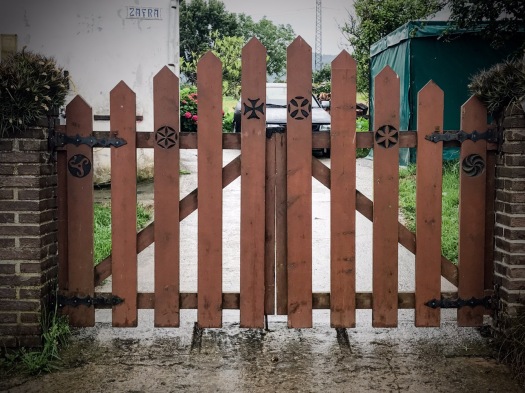 Mikey wants to point out this modern example of ancient symbology now relegated to someone’s driveway gate. If you look closely, you can see a Celtic swastika, sun-god spirals, early Christian wheels, and Templar crosses. Well, I guess they’re covering all the bases. What’s that French proverb? “Praise the god of all, drink the wine, and let the world be the world.”

Well, the world of Spain’s Casablanca is much greener than we had imagined! Sorry to nitpick, but, even during the rain, it seems a bit lush. (Just sayin’!)

Part of the angst today was not that it rained. Rather, it was frustrating insofar as the higher we climbed, there were more rain clouds that enveloped the hills.

As such, the walk actually passed through the low-hanging rain clouds! Ergo, although they spat out rain below the mountains, water seemed to literally hang in the air at our altitude. The really odd bit was rain could be heard falling onto the valley below.

Perhaps nothing lasts forever. For now, the rain subsided and we caught a wonderful view of the oldest church on the Northern Caminos.

The pre-Romanesque Church of San Salvador de Priesca was consecrated in 921CE.  For those of you keeping score, that means that it was designed and the actual building of it commenced much prior to the start of the Romanesque architectural period of 900-1200CE. Oh, and it also makes it the oldest church on the Camino de Norte. Yeah, there’s a local lady key-holder, but she was on vacation today. 😔

Well, suck it up and head down another muddy path once again to see what lies beneath.

A cock! Mikey was hoping for a cockfight (not really), but these two were pretty ok with each other.

Well, the last bit of true nature seemed this bit of soggy ground.

And then there was this overpass where the deer apparently like to nip a few apples when in season. Mikey’s posting this shot mostly for Frank’s enjoyment. (100kph & a deer?!?) Hugs, Dad! 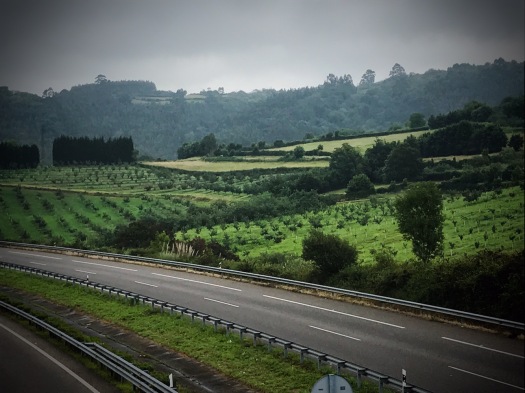 We are now entering the “Apple Capital” of Spain. Notice all the new growth. Yep, apple season isn’t for some months.

Still, as the town of Villaviciosa is known as the “Apple capital” of Spain, it has to front this crop throughout the year, right? We really liked this hat-like cornucopia of metalic apples spilling onto the lawn.

As Mikey did his laundry at the Hostal Congreso, the matron of the wine bar in which he was having a glass got a little upset that her family was eating dinner and their lone patron was not.

Voilà and Mikey got a sympathy snack!

Laundry done and we headed out for some local apple brews! 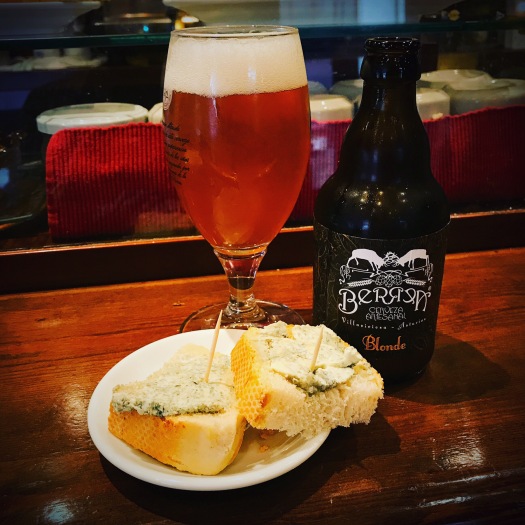 Mikey decided to try as many of the local products as possible and, as fresh apples were not in season, his choices were narrowed down to: Apple Muscato, Apple Cider, Apple Wine, Apple Beer, and Apple Vermouth. 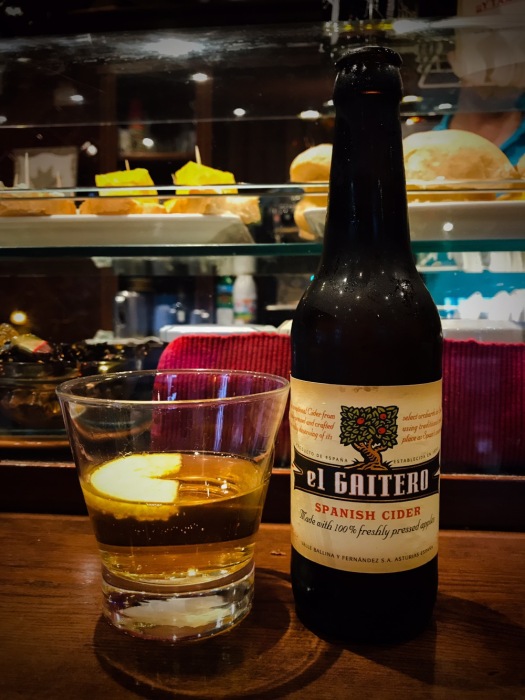 Talk about Bubba Gump in Spain! Well, they all were tasty.

Oh, and this was one of the tastiest vermouth’s ever. Check it out if ever in Asturian cider country.

Asturian Cider is very specific in regards to the manner in which it is served. Yes, this is a short clip, but most servers shy from being filmed.

​There’s a certain dispassionate ignorance of the glass and a real high mark of pour involved in the service.

As Mikey was still a bit peckish, we decided to splurge again for a multi-course dinner. (Please know that by “splurging,” we mean consuming too many calories far too late in the evening.) Dinner tonight was 4 courses and included bread and a full bottle of wine. The price was 10€ inclusive of tax and tip.

The first plate was a fish stew tbat featured the above crab cluster and was full of h ad-on shrimp, other shellfish, and various seafood.

Tbe second dish was an Asturian Fabada. This ia a white bean soup with chorizo, morcilla, and pork fat back. 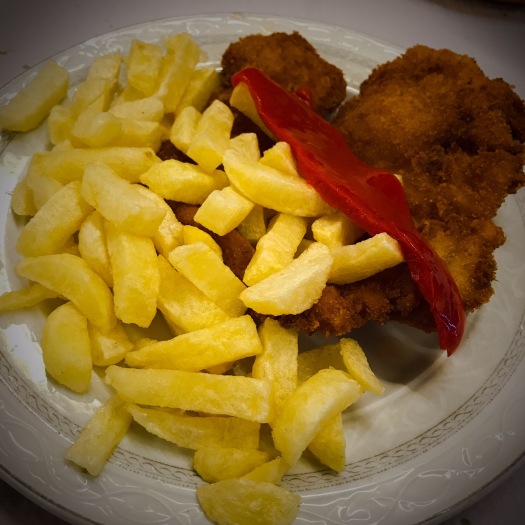 Less interesting was the third course which consisted of french fries and fried chicken with pickled  red pepper. Meh, but OK. We won’t complicate the rest with a prepackaged ice cream and simple cafe con leche that you will see in many other posts.

Full to the brim, Mikey strolled back to the albergue and climbed those rickety steps to his 2nd level bunk. Buenas noches a todas.