The torrential rain actually woke us up at 6 am this morning as Mikey had left the window open overnight. Looking out, we decided to sleep a bit more in hopes of waiting it out. It’s one thing to encounter rain while hiking (and we have gear for this), but beginning one’s day in a storm is perhaps the quickest way to get off on the proverbial wrong (and possibly wet) foot. 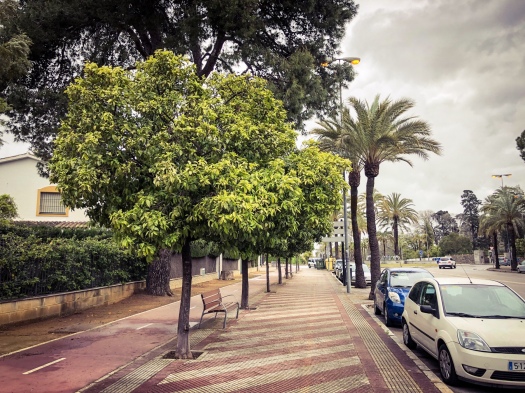 By 11 am, the rain had stopped and we decided to make a go at it. The first hour (around 3 miles) looked like this. No matter which Camino one takes, a truism exists: the larger a city, the longer it takes to enter or exit it. Normally, said approaches and retreats are rather dull examples of suburbia. 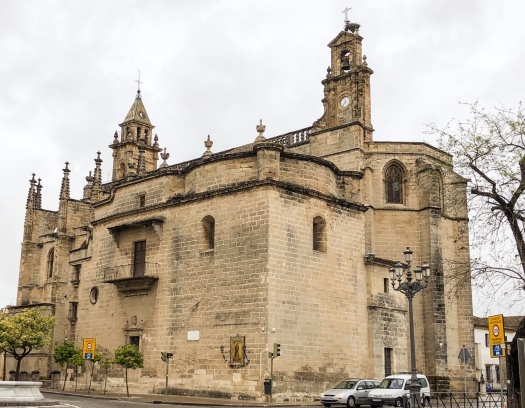 Oh, but we did see the Iglesia de Santiago. However, the priest wanted 5€ just to walk in so Mikey stomped out, forgetting to have his Pilgrim’s Passport stamped. Why all the fuss? Well, even the Cathedral in Santiago is free for pilgrims!

We also searched in vain for the yellow arrows that would lead us to our next stop, El Cuervo. Although he would never admit to it, Mikey’s duly inherited stubborn streak would not permit him to re-enter the church to ask for directions. Instead, he marched around its perimeter looking for any sign pointing towards the correct path. One lap shy of the church’s walls pulling a Jericho, Mikey used Google Maps and plugged in our destination. 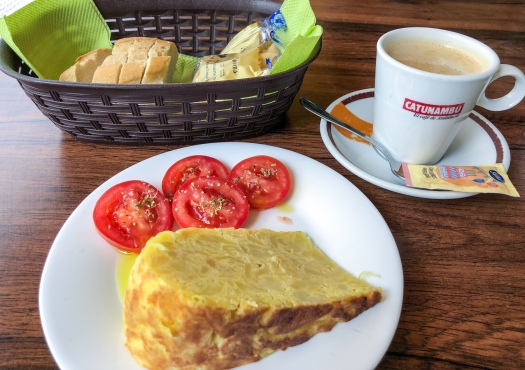 Maybe it was the inexpensive price of 3€ for breakfast or maybe he was just ”hangry” (that’s hungry to the point of anger), but the tortilla and coffee really hit the spot and we set off walking alongside the national highway for a bit. 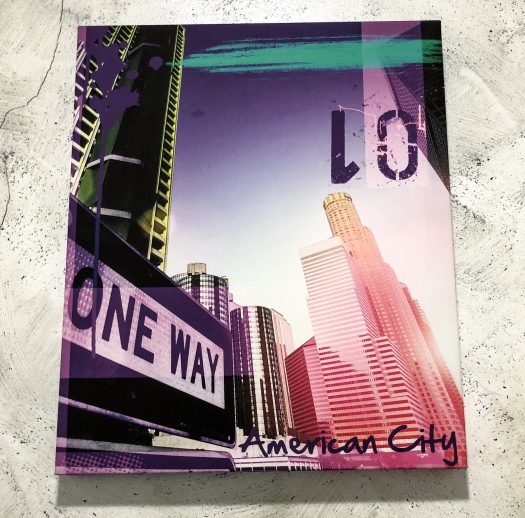 Oh, but this print of downtown Los Angeles was hanging in the men’s room. Small world!

Well, the sidewalk by the highway soon ended. By ”ended” we mean just that. There was no turn-off into a park or lot or anything. It just came to an end a la Shel Silverstein. Next thing we knew, we were walking through some kind of a dump site. Yeah, we like to post a lot of picturesque views of the Camino, but sometimes it’s a bit of a letdown. Still, the pilgrim must continue, so we passed a chemical plant, a few rundown ranches, and crossed a freeway or two. 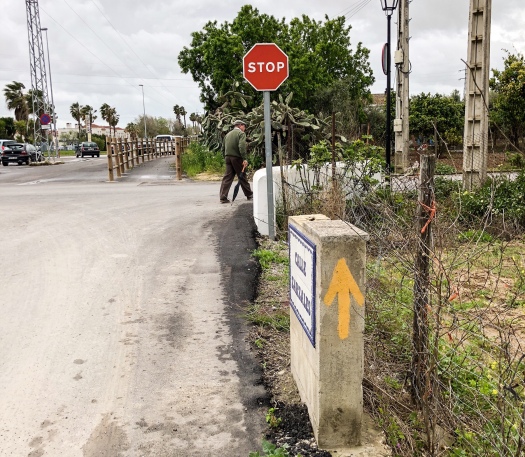 After one such crossing, we finally encountered a yellow arrow! Now, you, dear reader, may not realize the significance of these little signs, but they are as comforting as a warm blanket or reassuring hug. Especially when feeling last or unsure about the way, they are the Camino’s little way of saying, ”You’re doing fine, kiddo. Just keep going.”

And the arrows can be anywhere. This one was spray painted on a rock. 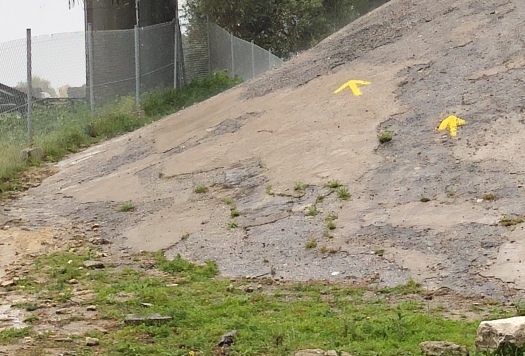 Someone doubled down on this embankment.

This one just had a pretty view of an old homestead in the background.

More common to the Camino Frances and other well-traveled ways, these ”official” stone markers often point the direction with a scallop shell’s (the symbol of the Camino) base indicating the correct direction in which to travel. Going back to the many ways to Santiago (see FAQ page), the scallop shell illustrates that no matter one’s origin, all ways lead to Santiago. 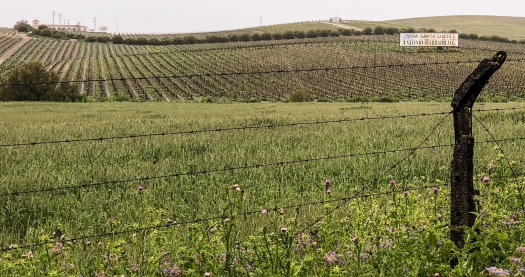 And this was just a nice looking vineyard growing Palomino and Pedro Ximénez grapes – the two varieties used in Sherry!

While not a navigation tool, per se, this billboard is known as an Osborne Bull and, while once used to market Osborne Brandy, is now a protected symbol in Andalusia. Although not expecting to get so close to one (as there are only 21 still remaining), it was a bright spot on a rather rainy segment of the afternoon’s hike.

In case you didn’t know it, Mikey really likes taking pictures of livestock and other animals encountered along the way. These roosters were huge – and rather cocky, too, if you’ll pardon that pun. 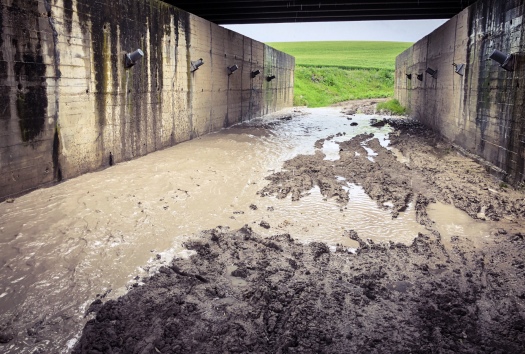 Well, all’s fun and games until we meet the seemingly uncrossable. Above is a fenced-off highway that could not be crossed and Google maps had no alternative paths. Suddenly Mikey heard the words of that old children’s song, Going on a Bear Hunt. ”Can’t go over it; can’t go around it; gotta go through it!” And so we did.

Waterproof hiking shoes and knee-high rain gaiters are wonderful to have on a muddy hike. That is, at least, when the mud and water do not rise above said equipment. At this point, it was all we could do to keep moving (so as not to get stuck) and try to keep from slipping and falling over with the 25lb backpack. Given that we had seen no other pilgrims thus far, it can rightly be said, ”On the Camino Agusta, no one can hear you scream.”

We made it! As if the posting of this blog didn’t clue you in already, the above lamb chop dinner should serve as a sign of our success. Following the wade through the muddy underpass, we emerged and hiked slowly for a few more miles into the town of El Cuervo around 7 pm.

The town boasts one hotel into which one gains access through a bar/restaurant. We secured a room for 15€ and were instructed that dinner was served between 9 and 10 pm. After washing his shoes and gaiters in the shower and securing them to the heater vents in hopes that they would dry by morning, Mikey took a walk around the town, had the above dinner, and settled in to watch Back to the Future in Spanish before crashing out for the evening. Sorry, but the voice actor for Doc Brown is really horrible. Well, good night from El Cuervo, where we met no one named José!