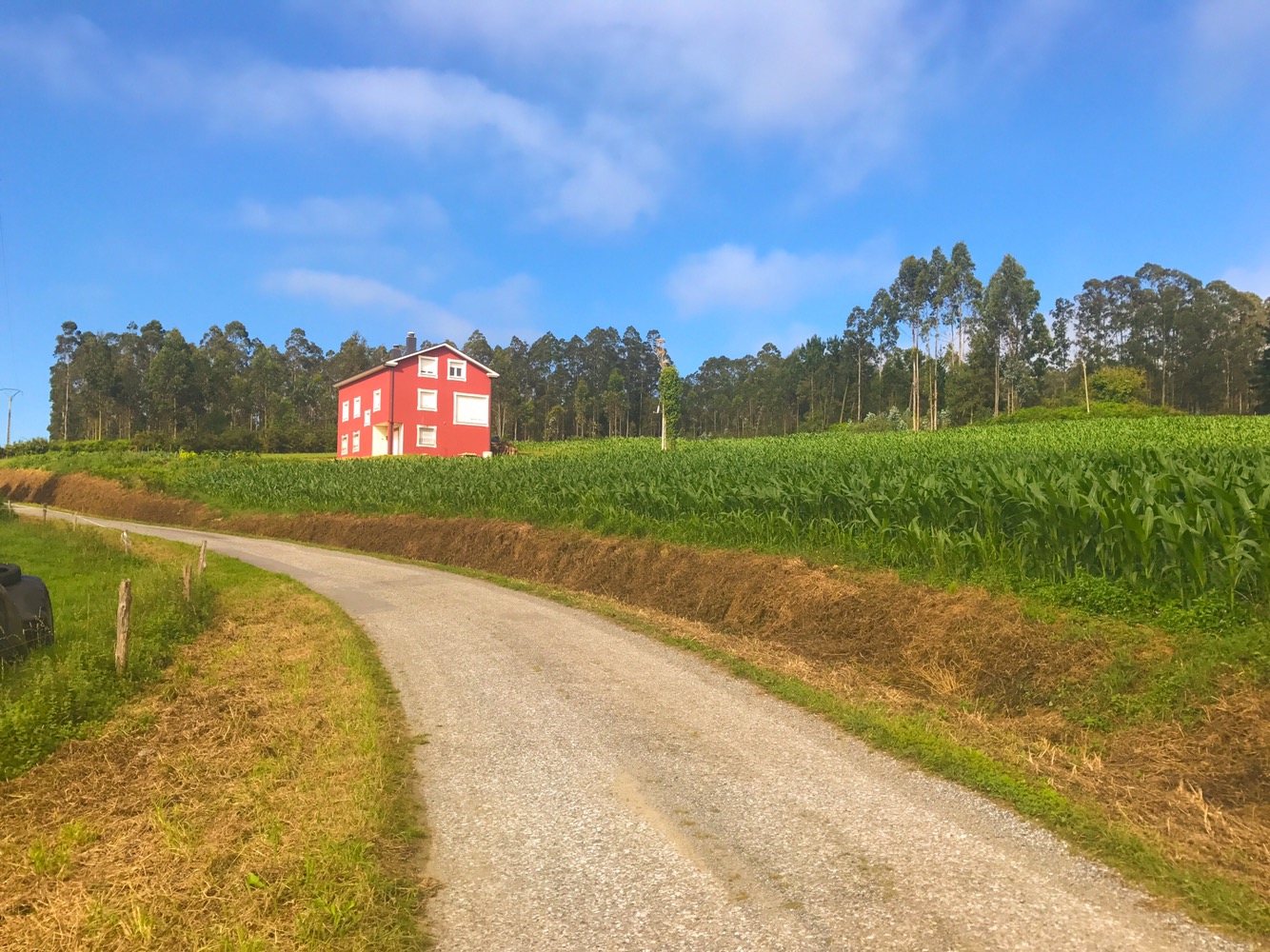 The feet hurt. They hurt a lot. Mikey’s advice for any of you who think walking a marathon each day would be cool: don’t.

Second note: no matter how comfy that bed is, get up! Do not linger around and wait until almost 9am before starting said hike. Otherwise, you’ll end up sunburned like Mikey.

Perhaps even more painful than the blistered heel was saying goodbye to the ocean. Today’s backward glances are the last we’ll see of the Atlantic as the path to Santiago from here on out will be inland. 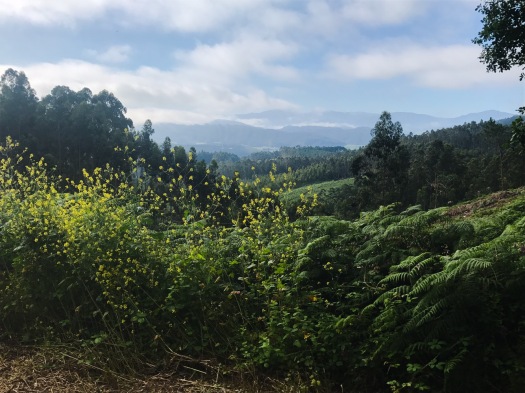 However, in place of the blue ocean, an almost technicolor palette opened up before us.

The stark whites of the Eucalyptus trunks contrasted with the deep blue of the sky and the radiant greens of the ferns on the forest floor.

Still, much of our day would be spent walking along long and hot country roads with little shade and no rest areas.

Mikey amused himself by finding the little things that were interesting. For instance, the above was carved into a hedge-line. Yes, it’s the name of the village, but there are only 3 houses in said community. I mean, they didn’t have a water fountain there, but someone painstakingly maintains the “hedge-marquee” for all six inhabitants. Talk about neighborhood pride.

Yet another case in point: let’s do a mailbox miniature of the house you wanted and place it in front of the (albeit) smaller house you built. Still, major points for a cool stone mailbox. 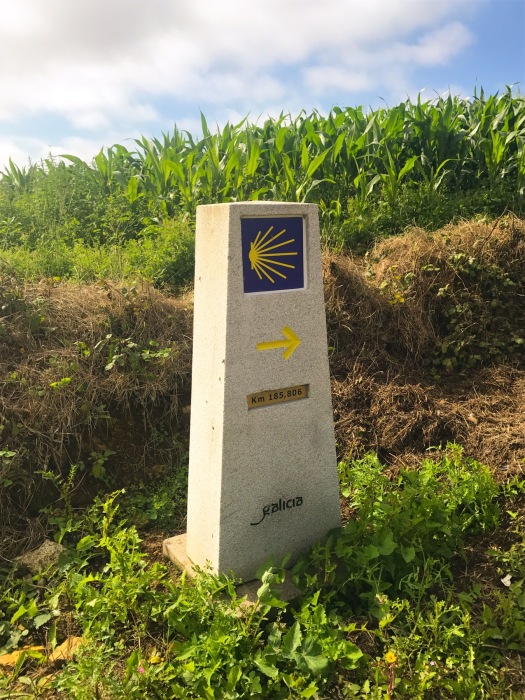 Speaking of stone, these markers will be with us through the final province of Galicia. The interesting part is the direction of the scallop symbol.

Whereas the shells in Asturias (the last province we walked through) direct always towards the cluster of lines, the Galician markers rely wholly on a yellow arrow with no importance given to the shells’ orientation.

Damn, that’s a bit too thorough! OK – look at your hand. Spread your fingers and imagine that an ant is walking along each one and heading towards a piece of candy on your wrist. The ants are coming from at least 5 directions, but all are headed to the wrist. This is the Camino shell. All roads/paths lead to Santiago. The scallop shell can best be described as your hand. Point it one way and you know in which direction Santiago lies. Turn it around and the pilgrim walks another path.

I hope the last bit made sense. If knot, here’s to you knot getting board!

Damnit! It’s official – Mikey has to light a candle for every pun from now on. Please, dear readers, someone must keep count.

Anyway, we stopped in for a coffee and fresh-squeezed orange juice when Mikey noticed this knot board. Mikey’s grandfather (and the basis for Dos Equis’ “The Most Interesting Man in the World” campaign), James Burnette, had been a Boy Scout leader and once presented Mikey with a very similar board that he had made. Call him biased, but Mikey thinks that Pop Jim’s Knot Board was way better!

Away from the brief shade of passing through forests, much of the day was spent with one’s shaddow. Oh, and he knows.

It’s hard to see the angle in this photo, but the road is steeply descending while the village is a rapidly growing ascent. Sorry – just seems counterproductive.

At long last, we made it to Lourenzá. This is the monastery which was founded in the 10th century. Yes, the baroque facade was affixed a good bit later and now it houses a religious museum (closed), but Mikey lokes it!

After doing a bit of hand washing, Mikey ventured back to the monastery to walk around the grounds. Talk about beauty!

Even this overgrown gazebo looking thing was neat. Still, he wasn’t really paying attention to the growing cloud cover overhead as we walked into the attached bar.

There’s nothing like bandages and Riberia (local wine) after a long day’s walk. 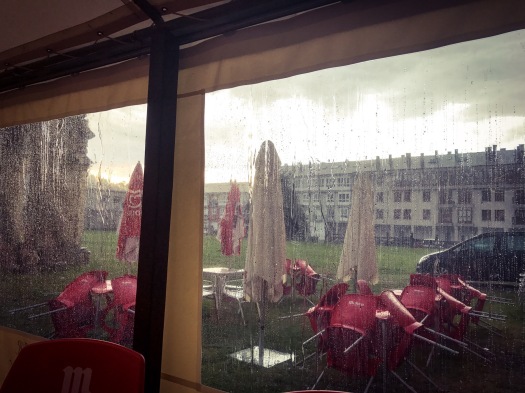 And then the bottom fell out. What ensued was a full on lightening and thunderstorm that stranded Mikey on a covered ptio bar for most of an hour – darn the luck!

Well, sometimes you just have to sit back, enjoy the fireworks, and try not to think about that laundry you left drying on the outside clothesline.