Portugal was definitely fun, but we headed via train to Madrid for a last couple of days before returning to the US. Following an overnight train to the Spanish capital, Mikey rested a bit and then went out exploring.

Yes, this looks like a photoshopped sticker, but it’s an actual sign in the Puerta del Sol in the heart of Madrid.

Nearby is a statue of the city’s bear mascot. The backside reads, “50 years in the sun.” Kinda feels like it to Mikey, too.

So, we stopped in for some local Spanish craft beer. There are a lot of craft beer bars in Madrid where one can avoid national brands like San Miguel and Estrella Galicia.

Also present.in the center city are a host of cheap eats like this 1€/slice pizza place. The toppings are always interesting with canned tuna and green olive being a local favorite. 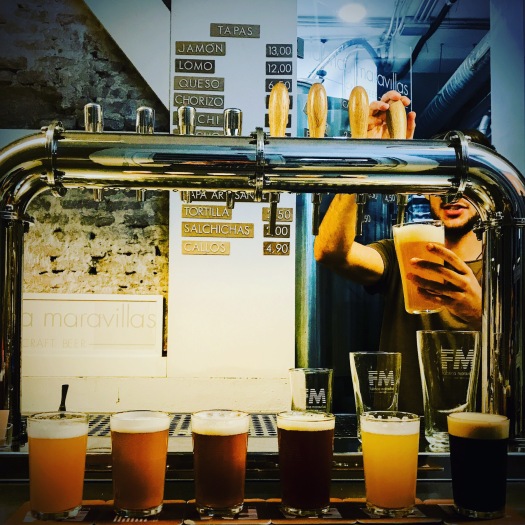 The pizza was ok, but Fabrica Maravillas is a local downtown brewery where we tried a sampler as our nightcap. 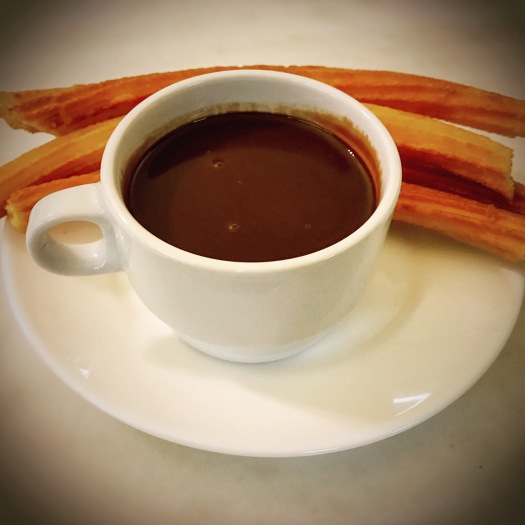 After breakfast, it was time to explore. We noticed this bullfighting mural in the metro station. 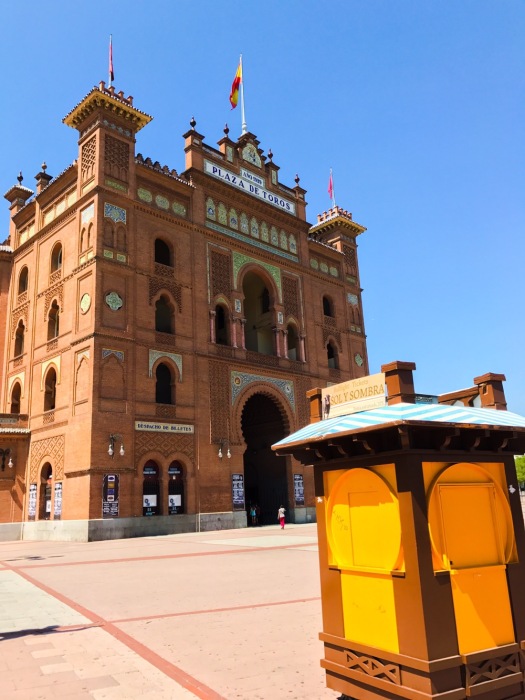 I guess it was fitting since the Ventas station services the Plaza de Toros or main bullring for Madrid.

Although Mikey is no longer an aficionado, he thought that this statue was pretty rad.

A short bus ride found us at Mad Brewing – get it? (Mad-rid!) This was the hoppiest and most California-like of all the Spanish breweries we encountered. A+

Oh, and they have a wonderful wild meat charcuterie platter that will win over any non-vegetarian. 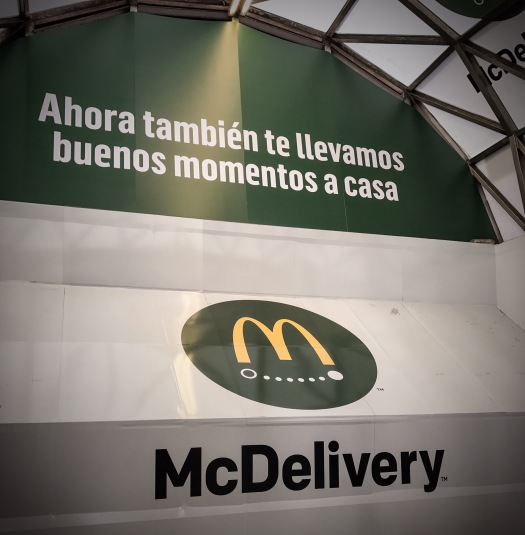 This was a pretty cool mural inside Chinaski Lavapiés. Located in the Lavapiés (literally “wash your feet) district, it had a great selection of Spanish beers. 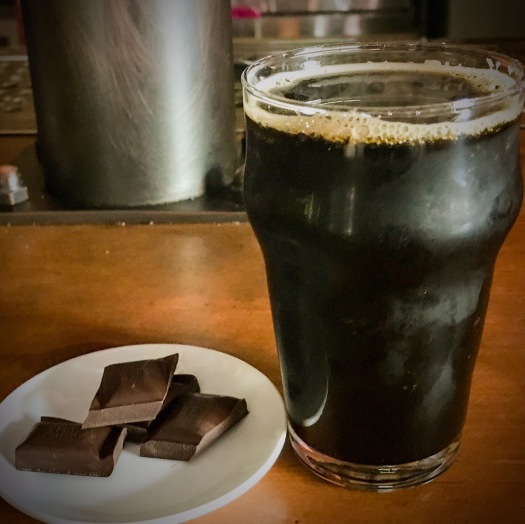 Oh, and they serve local chocolate with the porters!

Also rich were the nearby art offerings at the Reina Sofia Contemporary Art Museum.

This is an early Dali long before Clocks or many of his other well-known pieces that are also on exhibit. 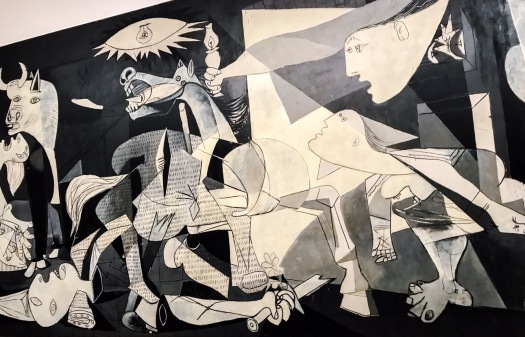 Still, the real jewel at the RS is Picasso’s La Guernica.  Unlike in the town made famous more by this piece than the atrocity committed there, photography wasn’t permitted. I guess that didn’t stop Mikey! 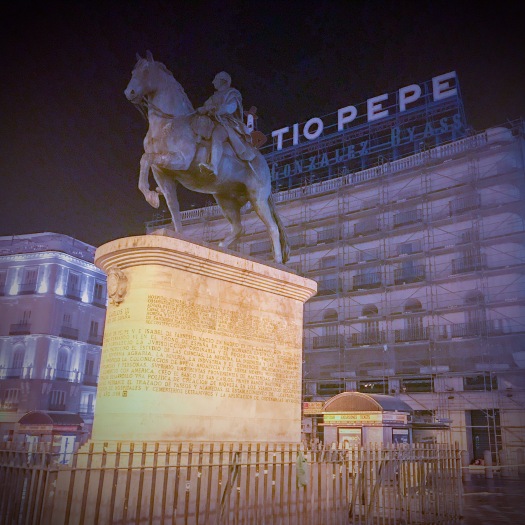 After a long day of sightseeing, we headed back to the city center to find a night market. If you’ve never experienced one of these Spanish treasures, you are really missing out! 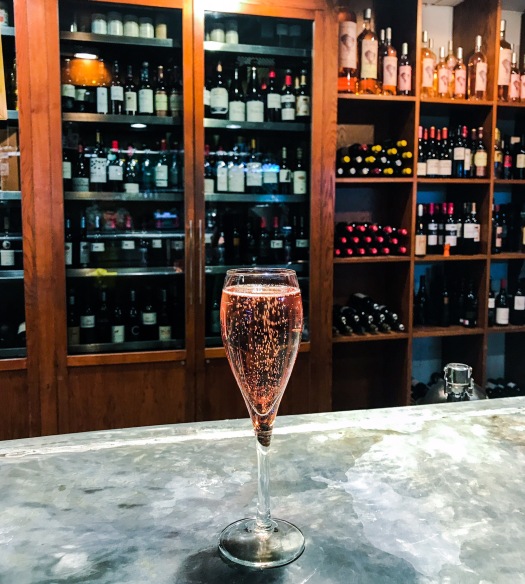 Unlike many of the traditional markets, the Mercado de San Miguel is a showcase of Spanish cuisine ready to eat. It still has the many stalls from which to peruse, but Mike recommends grabbing a glass of sparkling rosé before proceeding! 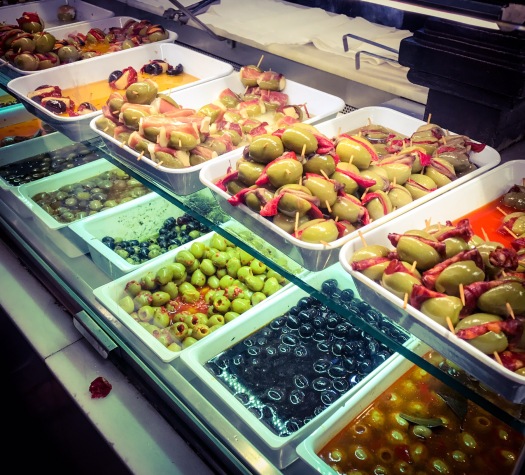 Little aperitifs like olives are available for modest prices and are handy in warming up the palette.

Still, with bubbly in hand, Mikey was more interested in the shellfish stalls. Here, one can choose oysters on the half shell or any number of national delicacies.

As it was his last night in Spain and in honor of the Camino, Mikey selected a plate of Galician scallops.

More of a photo op than an “all done,” we snapped this shot of a finished meal.

As for a nightcap, this Vermouth Mojito was an unexpected discovery and may appear at a Los Angeles cafe soon! Simply delicious.

Soon after the market closed, we headed back to the hotel on a final metro train to do last minute packing. There’s another story about how Mikey almost missed his flight, but we’ll save that for another day.

Before we knew it, Portugal was disappearing and the great blue expanse of the Atlantic Ocean signaled the end to our journey. As our plane caught the jet stream, hurtling Mikey faster than he had traveled in almost two months, he recalled the words of one of his favorite poets, T.S. Elliot:

“This is the way the world ends.

This is the way the world ends.

This is the way the world ends.

Not with a bang but a whimper.”

So is that all or what’s next? Well, we still have to travel to Los Angeles via a stop in Georgia to see the family. Perhaps there will be another post documenting this? If so, we leave you with the Spanish salutation of “hasta entonces” – until then…