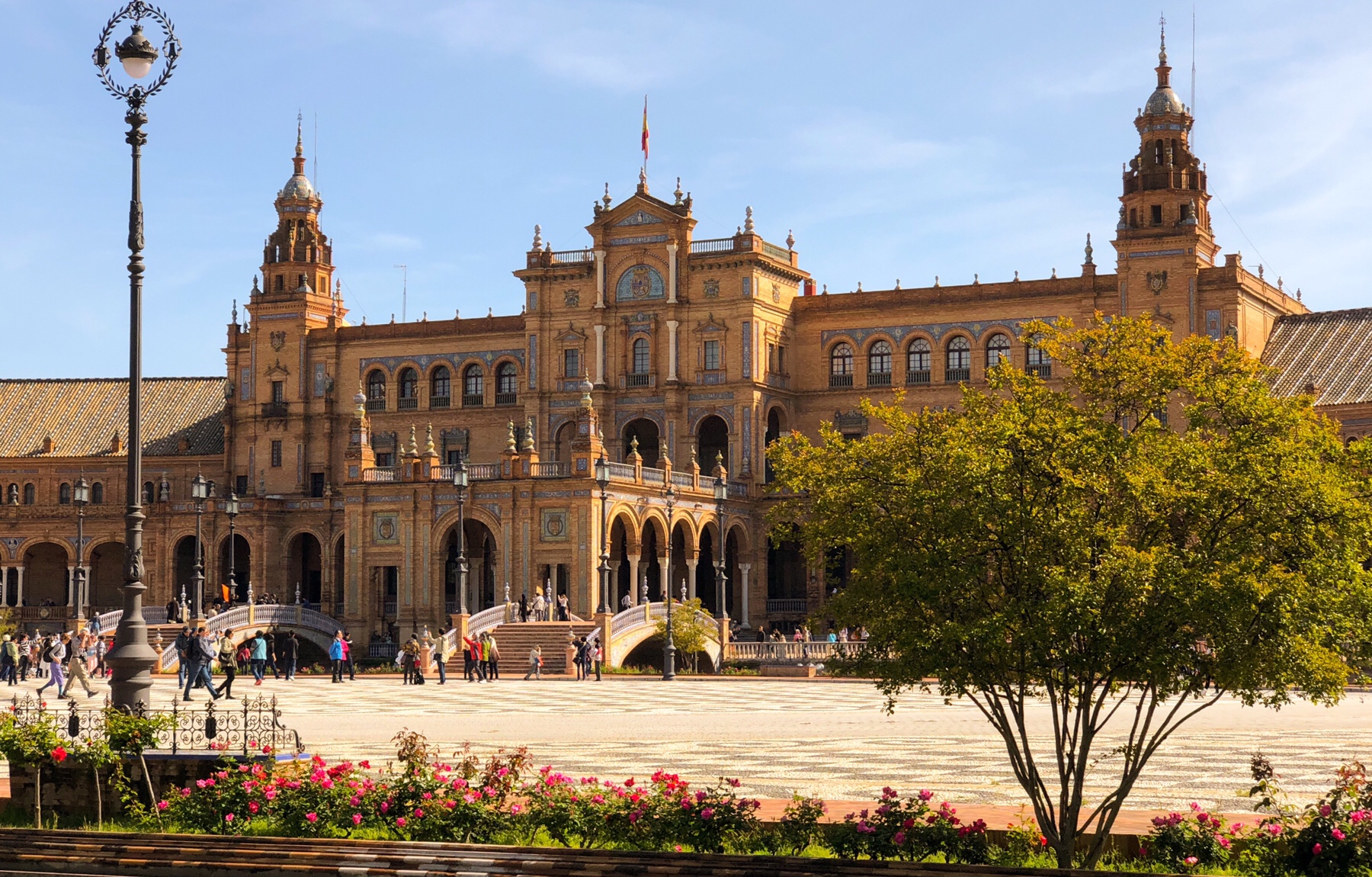 As everything had closed so early yesterday, we got up around 7 am in order to see as much as possible today.

Mikey has a new favorite breakfast spot in Sevilla. In addition to his coffee and OJ, he had smoked salmon, cream cheese, caramelized red onion, and spinach on a fresh baguette (2.50€!). Then it was off to the Plaza España:

OK – Mikey is getting a little better with these time-lapse videos. This one was fun to shoot, as there weren’t so many people out in the early morning.

Unique to Sevilla, the architectural style is a blend of Moorish, Art Deco, and various regional influences.

If might look familiar as it’s from a galaxy far, far away. That is, it was used for some outdoor scenes in the city of Theed on the planet Naboo in the 2002 Star Wars Episode II: Attack of the Clones. 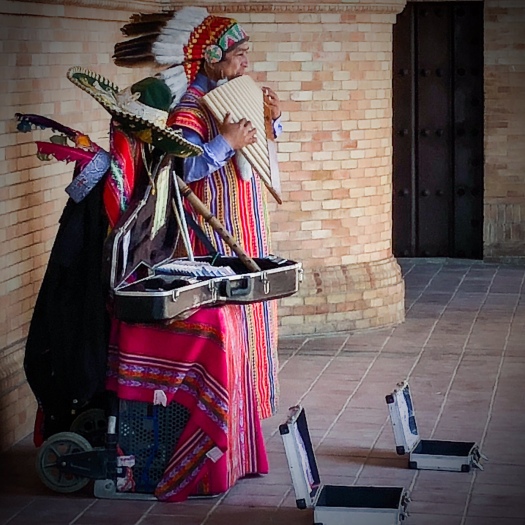 And, of course, there was that one guy dressed in Native American garb playing Sinatra’s ”My Way” on the Pan Flute. Hey, it was kind of catchy.

Also a bit weird was the placement of a military history museum inside the Plaza. If you’ve never been to one, put a Spanish military museum on your next Spain itinerary – if only for the blatant right-wing shock value.

Ever since that whole Franco bit with the military coup, Civil War, dictatorship, and all, the military museums are like fortresses run by retired soldiers who still think they’re at war. Security is on par with if not exceeds that of Spain’s airports and there still exists an unapologetic fascist slant to most exhibits. 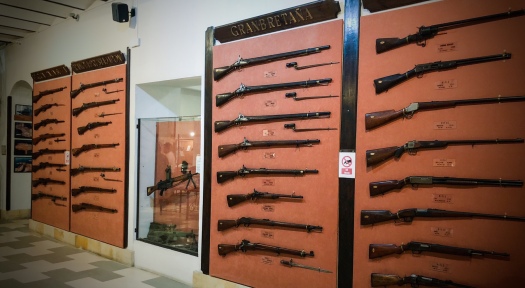 They love to show off their guns… 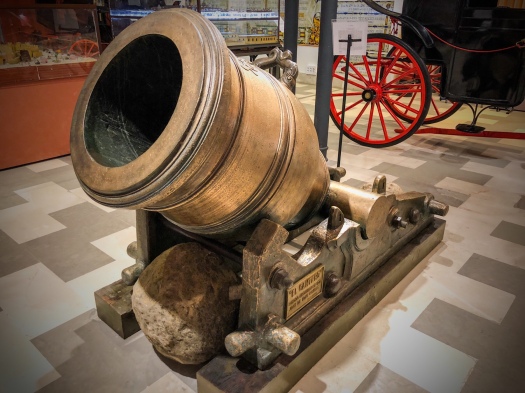 …and cannons. Spain really loves its arsenal of old cannons. This one was designed to load with rocks and any other heavy stuff that was lying around. Think of it as an industrial-sized blunder bust.

Here’s one for you – ever wonder why Spain didn’t fight in World War II? Among a plethora of other reasons, to put it bluntly, Hitler really couldn’t use artillery units that still carried their cannons on horseback in the 1940’s. Yeah, their few tanks were built on minitruck chassis and the cavalry had to carry its weight in hay!

The particularly troubling part, though, was the bomb and missile room. Yeah, we’ve lived (to some degree) with these devices ever since the Chinese invented gunpowder in the second-century CE, but seeing so many examples of human ingenuity to kill and maim all in one room was pretty shocking.

Oh, and the ”no smoking” sign below the fan was really disturbing – I mean, are they still loaded?!

With the Plaza now filling up with crowds, we headed over to the Cathedral to give it another go. One problem Mikey faced in photographing the third largest church in the world (and largest cathedral) is just that – its size.

Built on the site of the Almohad Mosque (1172-1248), the cathedral designers envisioned “a church so beautiful and so grand that those who see it finished will take us for mad.” They kept the minaret and added bells, but the mosque was torn down and new construction lasted from 1434 until its consecration in 1507.

Taking 44 years to complete, the main altar is a gothic masterpiece by Flemish craftsman Pierre Dancart. While inarguably the largest and richest it is also considered one of the most beautiful altar pieces in the world.

Opposite the main altar is a pretty cool looking choir. (You can see the hymnal stand in the middle.) 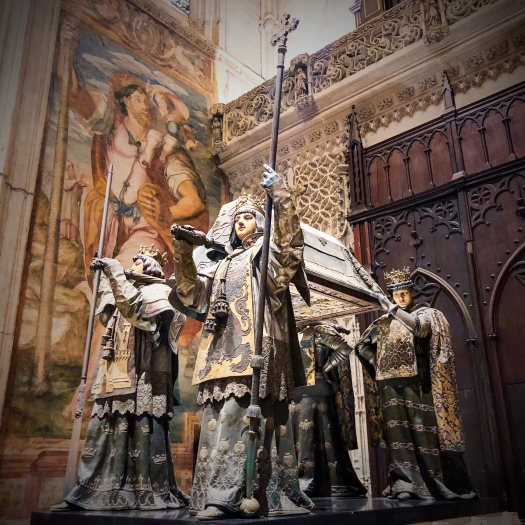 One of the main attractions (especially for New World visitors) is the tomb of Christopher Columbus. Although build many years after his death, it features royal pallbearers representing the then 4 kingdoms of Spain: Castile, Leon, Aragon, and Navarre (for those of you keeping score at home).

Remember when we spoke about the builders keeping the old minaret? Well, they added bells and a steeple and dubbed it “La Giralda.” This is a view from the Patio of the Oranges, but below are some views from the top of La Giralda: 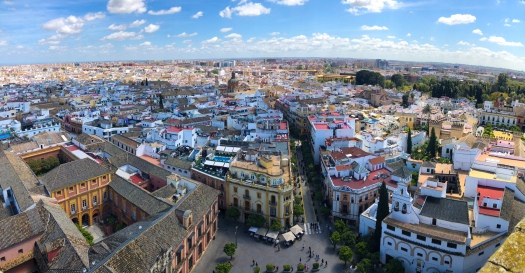 This just looked dope with the grating and the Moorish scalloped double arches.

The town was pretty proud about Christianizing the minaret and has used it as a city symbol ever since.

A common refrain mentioned by US presidents is the amazing intimidation factor created by the Oval Office. President Carter once reminisced how even the most self-assured lobbyists became utterly tongue-tied upon first entering this room in the White House and could barely stammer out their gratitude for having been invited.

Let’s just say that the Spanish Inquisitors were well aware of said intimidation factor of round rooms way back in the 16th-century. Welcome to the original Oval Office where the Archbishop would be happy to hear your concerns and perhaps ask you a few questions concerning your Catholic piety – or lack thereof! Yes, the Spanish Inquisition was headquartered for a time in Seville, so one need only imagine what conversations took place here.

Mikey decided that this would be the last thing he saw in this office after fainting and looking up at the ceiling while lying flat on his back.

Also kinda creepy: the confraternities that march during Holy Week in Sevilla. Just google it.

Then it was time for lunch. Whew – that’s a lot to cover already! OK, so we have Gazpacho a la Andaluz (which basically means a puréed cold tomato soup with olive oil, hardboiled egg, and ham) and Solomillo a la Whisky (sirloin steak in a whiskey sauce) with fries. 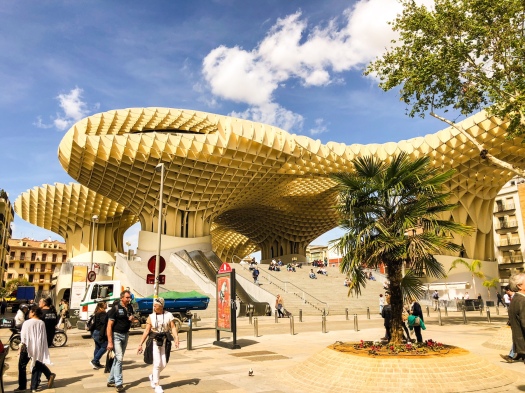 We had a little bit of time to kill after lunch, so a visit to Las Setas seemed like a fun idea. Spanish for mushrooms, the structure was completed in 2011 and claims to be the largest wooden structure in the world. 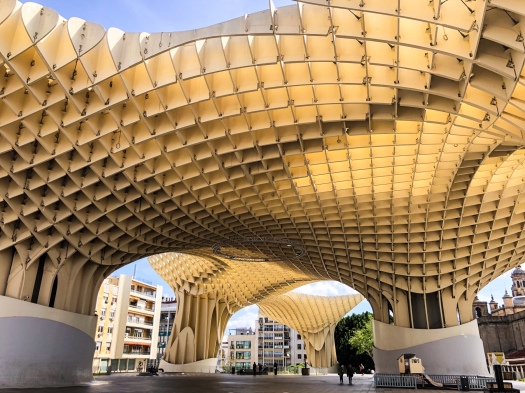 Yeah, it’s supposed to be inspired by the vaults of the cathedral, but Mikey just thinks the architect was on mushrooms.

Next up was the Royal Alcazar or Palace. Built for Peter of Castile (known alternately as “The Just” and “The Cruel” – guess it’s all about perspective) in the 14th-century, this is the oldest European royal palace still in use.

The Moorish style of architecture is prevalent throughout the many buildings.

Also prevalent are the myriad of ponds and water features throughout the complex.

On a personal note, Mikey had a serious case of warped deja vu while at the Alcazar. Sure, it’s been nearly 20 years, but he remembers fondly walking the grounds in a time before selfie sticks and HD camera phones – heck, even before digital cameras were affordable! It’s just kind of sad how everyone seemed like they were on a photo scavenger hunt – everybody snapping pictures and rushing on to the next photo-op. We probably annoyed a few amateur photographers by standing there and just appreciating the view. 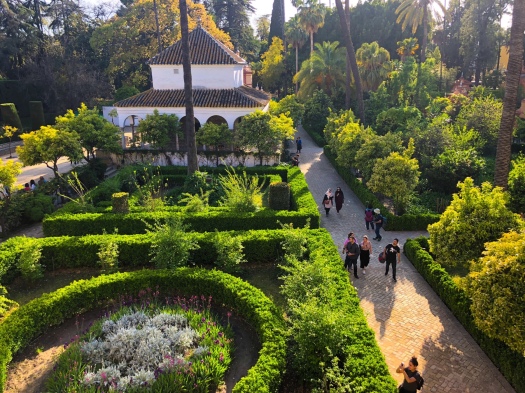 Just an aerial view of part of the gardens.

If this palace looks familiar, you might recognize it as Dorne from the TV series Game of Thrones.

It’s also built in the same style and by the same builders as the Alhambra Palace in Granada.

A common attribute in Moorish architecture is Arab script covering the walls. Much of it is religious but often times poetry and personal messages hold pride of place in public and private rooms.

We know how much Mikey likes his ceiling shots. This one was fun with the arched windows lining the ceiling.

And check out this dome! It’s simply amazing. 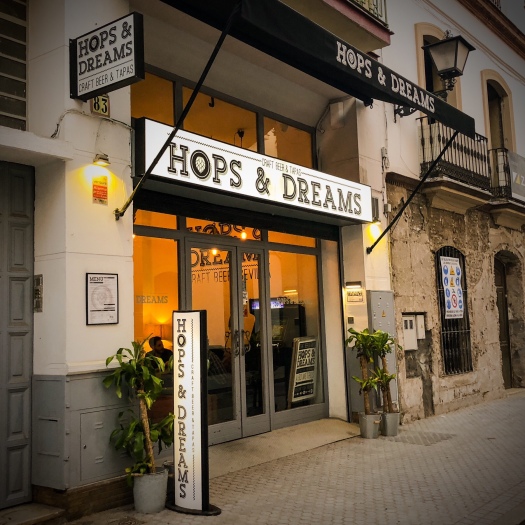 Well, we were rushed out at closing and decided to try some more local brews. The name of this place was the real seller.

Still, with good beers from the South and quite a few from Basqueland Brewing (in the North), Hops & Dreams was a real win.

The only real “brewpub” in Sevilla, Maquila was a must try for Mikey.

In addition to making their own tasty brew, Maquila has a wonderful menu. These amazing fried balls of yumminess are squid croquettes with ink. The black part that you see is the ink filling. 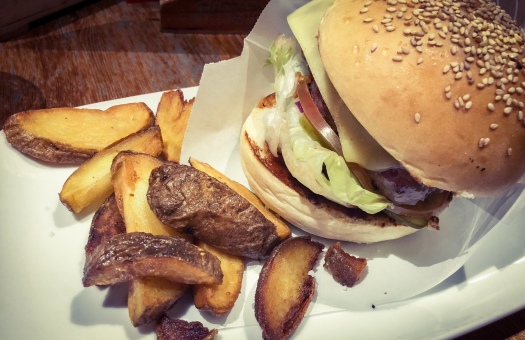 With a final stop at the Irish pub for a cheeseburger, we bid Sevilla adieu and are turning in early since the Via de la Plata starts tomorrow. ¡Buen Camino!