While we did get to bed at a reasonable 10 pm last night (all four roommates came staggering in at 3:45 am), there was no time for laundry. Ergo, 8 am found Mikey loading the washer with practically every article of clothing he has and shivering in an undershirt and running shorts for the next two hours.

After the laundry, we surrendered our keys a full two hours before checkout (this is a record) and began walking on the Camino de la Plata. This began by crossing over the Triana Bridge (AKA the Isabel II Bridge) with views of Sevilla across the Guadalquivir river.

Even though it was only 10 am, the sun was already shining bright and Mikey started looking for a kayak tour like the one we saw below the bridge.

We failed on the finding any water-sports opportunities, but we were happy to spot our first Via de la Plata marker.

Oh, and the horse/donkey team that we met on a bridge – way cool. 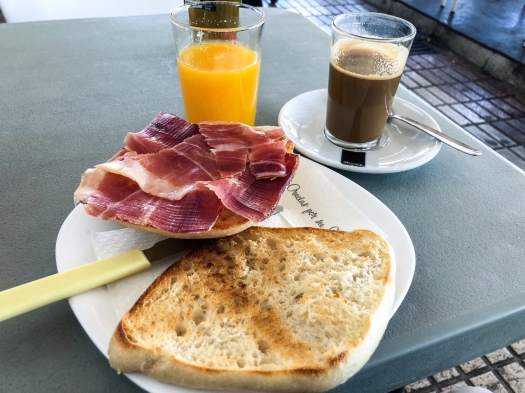 While passing through one of the suburbs, a sign caught our eyes: Ham Toast, Fresh Juice, and Coffee – 3€. Yes, please!

This was random. Having just enjoyed thinly sliced jamón, we came across this giant ham hock float. Mikey would give anything to see it in next year’s homecoming parade!

A little over an hour’s walk from Sevilla is the small town of Santiponce. It is home to the newly renovated San Isidro Monastery which, after walking a good ways towards, we found was closed today. So was the Roman theatre that we hiked up to see.

Fortunately, the ruins of Italica were open today and we got to roam around the grounds (still an active archeological dig site) checking out rad stuff like this Roman amphitheater. 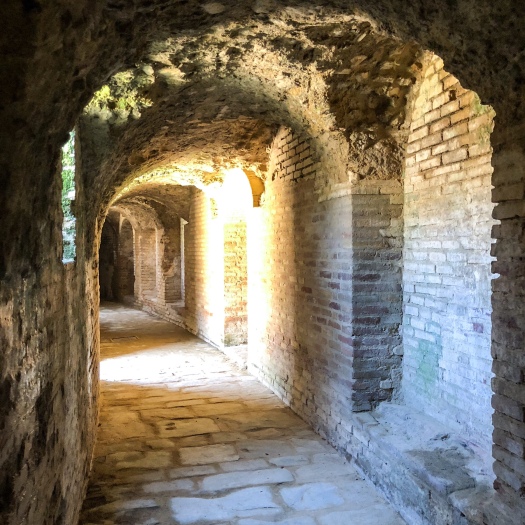 Mikey’s chest kind of swelled a bit while walking through this passageway once used by gladiators. 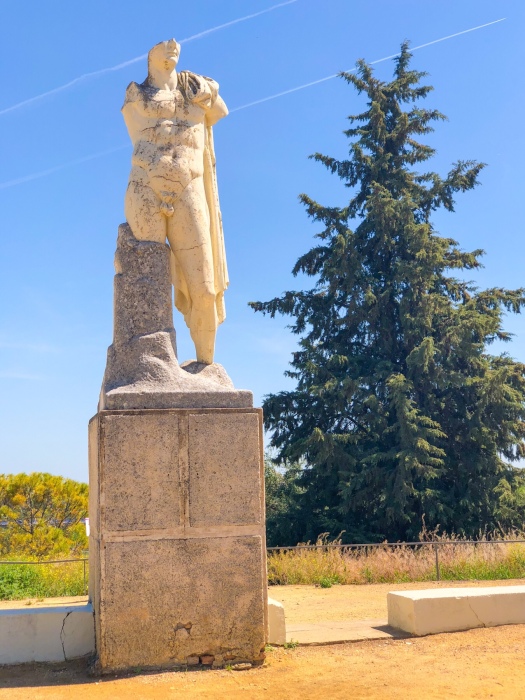 Not really sure who this guy was, but he looked pretty cool.

There are still random columns and lots of walls separating the ruins of different houses. Oh, and talking about residential stuff – Emperor Hadrian was born and grew up here. Yeah, you know – the guy who built Hadrian’s Wall to keep out all those Scottish barbarians? Yep – born here.

One of these original floors could have even been in his nursery. Well, probably not – but, maybe!

The ruins were a lot of fun, but we keep postponing the actual walking bit of this pilgrimage. So, off we went, hugging the side of a freeway for a while. 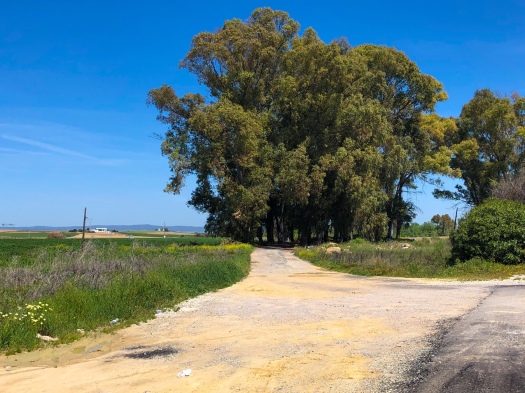 Finally, the path left the roadway and headed out into some farmland. 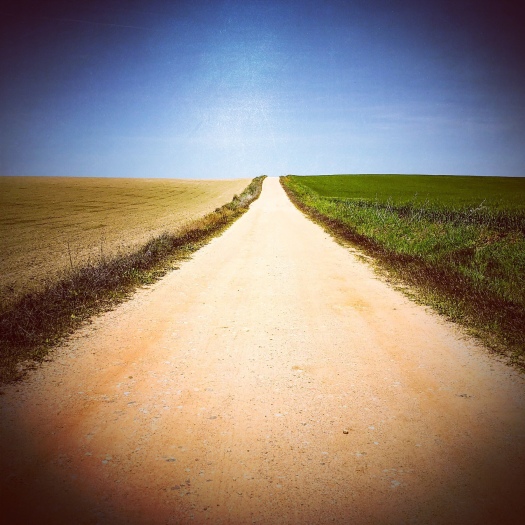 The afternoon sun was really beating down on us as Mikey began to regret the Roman ruins detour that had taken up two of the cooler morning hours. Well, it was beautiful country.

This was kind of interesting. While driving alongside farmlands one often sees irrigation mechanisms, but having the chance to inspect one up close is something that our city-boy protagonist has never really done. Sure, one can imagine how giant sprinklers work, but Mikey enjoyed it all the same. 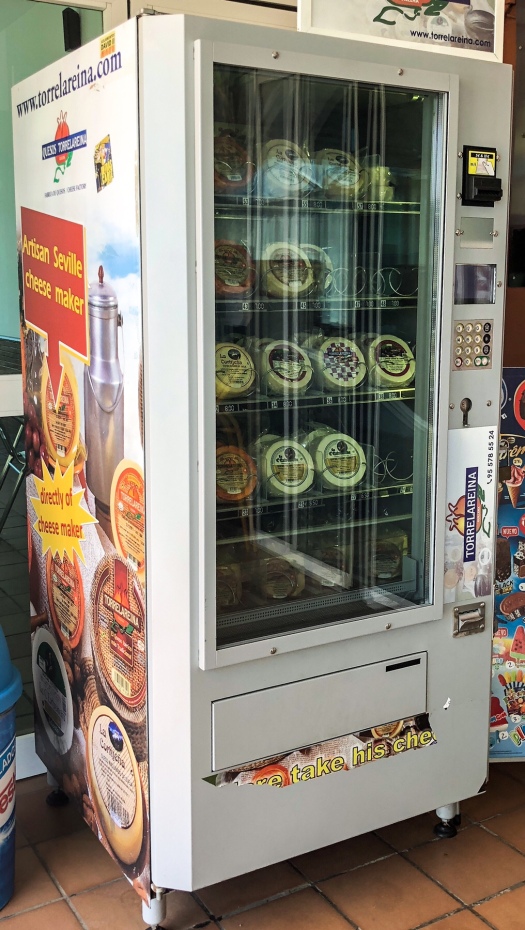 Here’s another first: the local artisanal cheese vending machine. Now what you probably can’t make out is the original English writing at the bottom of the vending machine where, presumably, one removes the purchased product. It once said, “Here take his cheese.” Haha! Yeah, Mikey could make a mint on English grammar correction services in Spain. 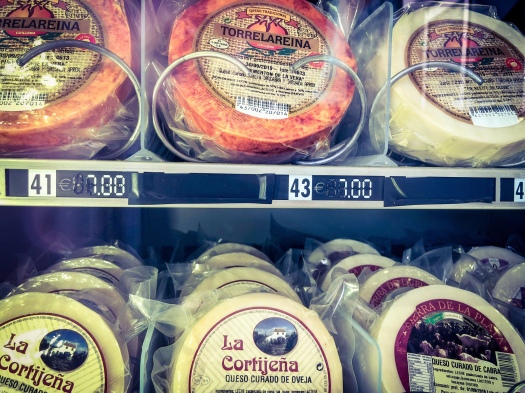 Still, this isn’t the weirdest vending machine we have seen. Two years ago, Frank and Mikey found a cured meats vending machine along the Camino Frances. That was definitely weird, but not too long ago, Mikey discovered a caviar vending machine in Los Angeles, CA at the Hollywood and Highland shopping mall. The best part about this one? It had $2,000 caviar, but did’t accept credit cards. Yeah, don’t forget to grab cash from your mattress before going out for caviar at the vending machine.

Still on the weird vibe, this was a sign at the same truck stop diner. Translation: “Microwave and Lactation (breastfeeding) Zone.” Yes, because when one thinks about nuking his Hot Pockets a nursing mother obviously goes along with it.

Thankfully, we found a trail leading from the road and were able to take it the rest of the way into the town of Guillena. 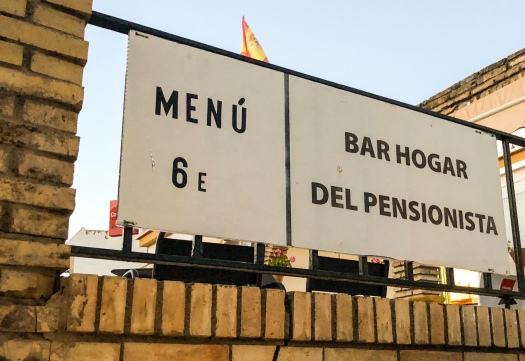 After settling in at the albergue, we walked about the town for awhile before deciding to have dinner at the bar recommended to us by our septuagenarian volunteer host. After all, a 3-course dinner with wine for 6€ – what could go wrong?

Let’s start by translating the name of the bar: The Home of the Pensioner (while meaning retiree, the connotation is more of an old/feeble person living on a very fixed income). Ergo, 6€ was inexpensive, but the iceberg salad, boiled chicken, and unsalted fries were definitely a more senior-focused gastronomic approach to dinner. When it came time for the final course, Mikey spoke up and requested caffeinated coffee in lieu of whatever soft puddings that might comprise the whole of the dessert menu.

The town church was a very modest village parish. Still, it was the largest building and had some nice altarpieces inside. 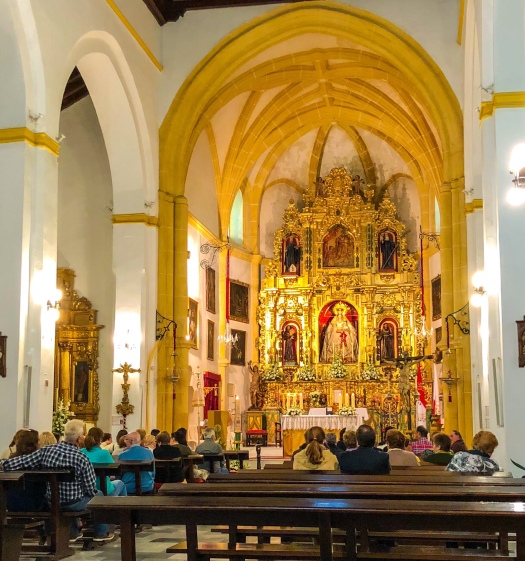 Of real note here was the sheer number of attendees for a Tuesday night mass. Considering the town’s small population, it was impressive to see so many church goers on a weekday night. (Still, as a Dutch pilgrim pointed out later, when there’s only one game in town …)

On the way back to the albergue, we stopped off for a coffee. Remember that 5-star ham hock float? Yeah, looks like they take it pretty seriously in this neck of the woods.

Alas, a tired and sunburned Mikey must get to bed. So, in the words of Ham(let), “Now cracks a noble heart. Good night sweet prince; And flights of angels sing thee to thy rest.”