We left the walled city of Galisteo in an early morning fog. While not unusual to experience morning fog in these parts, the river crossing and dramatic views of the city played well with it.

This is a view from a medieval bridge that spans across the river. 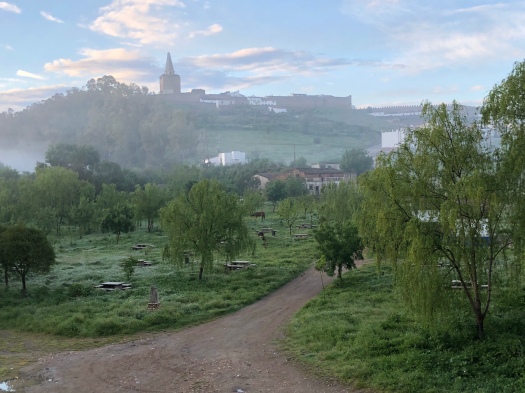 Looking back on the city was almost fairytale-like. Mikey thinks he should rent mall space and sell prints alla Thomas Kinkade. Just a thought.

Even as we passed into the nearby farmland, the town left quite an impression on us. 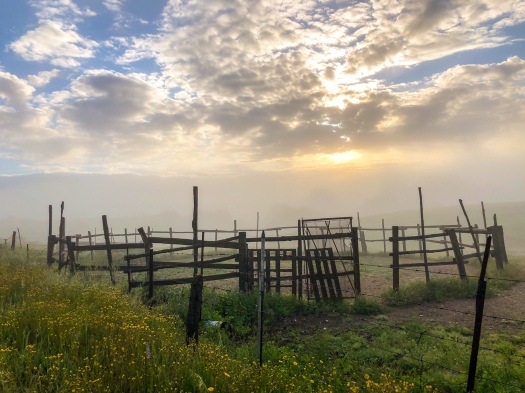 Now, for some 11km, we walked on the shoulder of a country road passing a plethora of farms and a multitude of livestock. This corral was definitely a DIY kind of structure, but its simplicity was quite beautiful. 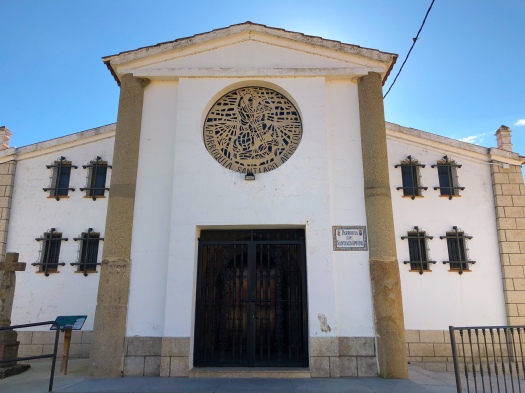 Speaking of simplicity, this modern Church of The Apostle Santiago in Carcaboso would have been completely unmemorable save its most incredible placard outside.

Badly detailing various wedding traditions in the town, the above is worth a read. Although Mikey has tried to make out exactly what transpires several times to no avail, if anyone had mentioned the custom of “asking for the b—-” the night prior to his sister’s wedding, he would have slugged the guy. (We got you, sis!) 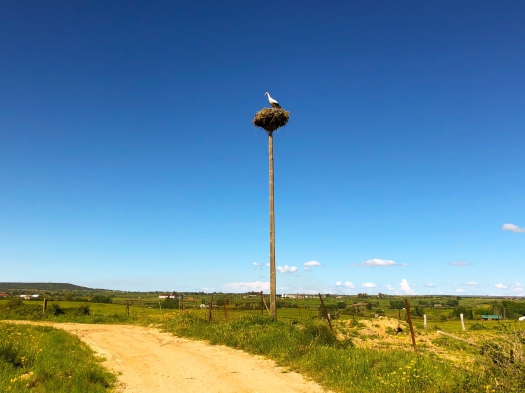 Speaking of “b’s,” look at this bird! We’re not really sure why the White Stork is so important to the region, other than their eating insects and such, but structures are built everywhere to accommodate the birds. 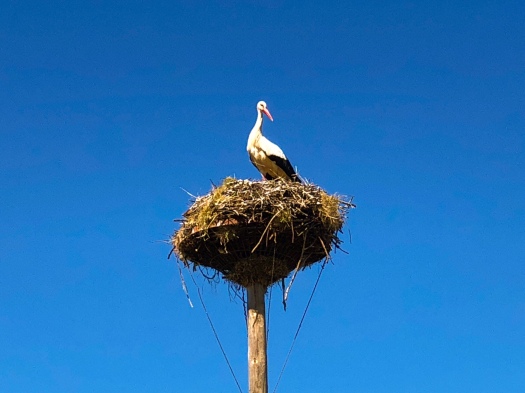 We have, however, found out that about 35% of the white storks in Spain are found in Extremadura. Oh, and there’s also this really gross thing that they do called urohidrosis – but you’re just going to have to google it. I mean, this is a family blog!

Blue skies were definitely par for today’s course and we enjoyed the solitude of climbing through the hills and looking back on what we had already walked through today.

We’ve already mentioned the two paths that often overlap on our Camino. As you can see in the above, the yellow marker designates the Camino and the green shows the Via de la Plata veering a bit away from it.

Even with the clear skies, we found a lot of shade and a cool breeze really helped today. What was of little help, though, was the May Day holiday which caused most hotels to fill to capacity.

Well, it’s not our first time at the rodeo and, as we’ve experienced before, flexibility was key. At least Mikey kept repeating this as we walked 7km away from where we had intended to stay for the night. This marshy kind of part was pretty, though.

So we arrived 7km away Friday m the Camino in Oliva de Plasencia and were greeted by crocheted trees and flowers. Yeah, some of the town grandmothers have way too much time on their hands!

The amazing part, however, was the beautiful country home that had been converted into one of the nicest albergues we’ve ever seen. It was rustic, but the shower was amazing and there was even a craftsman kitchen on the first floor. But, pearls to swine, our group of 8 all went out to the town restaurant (yes, there’s only one) instead of cooking. Lost opportunity? Not really as there wasn’t a grocery store for miles.