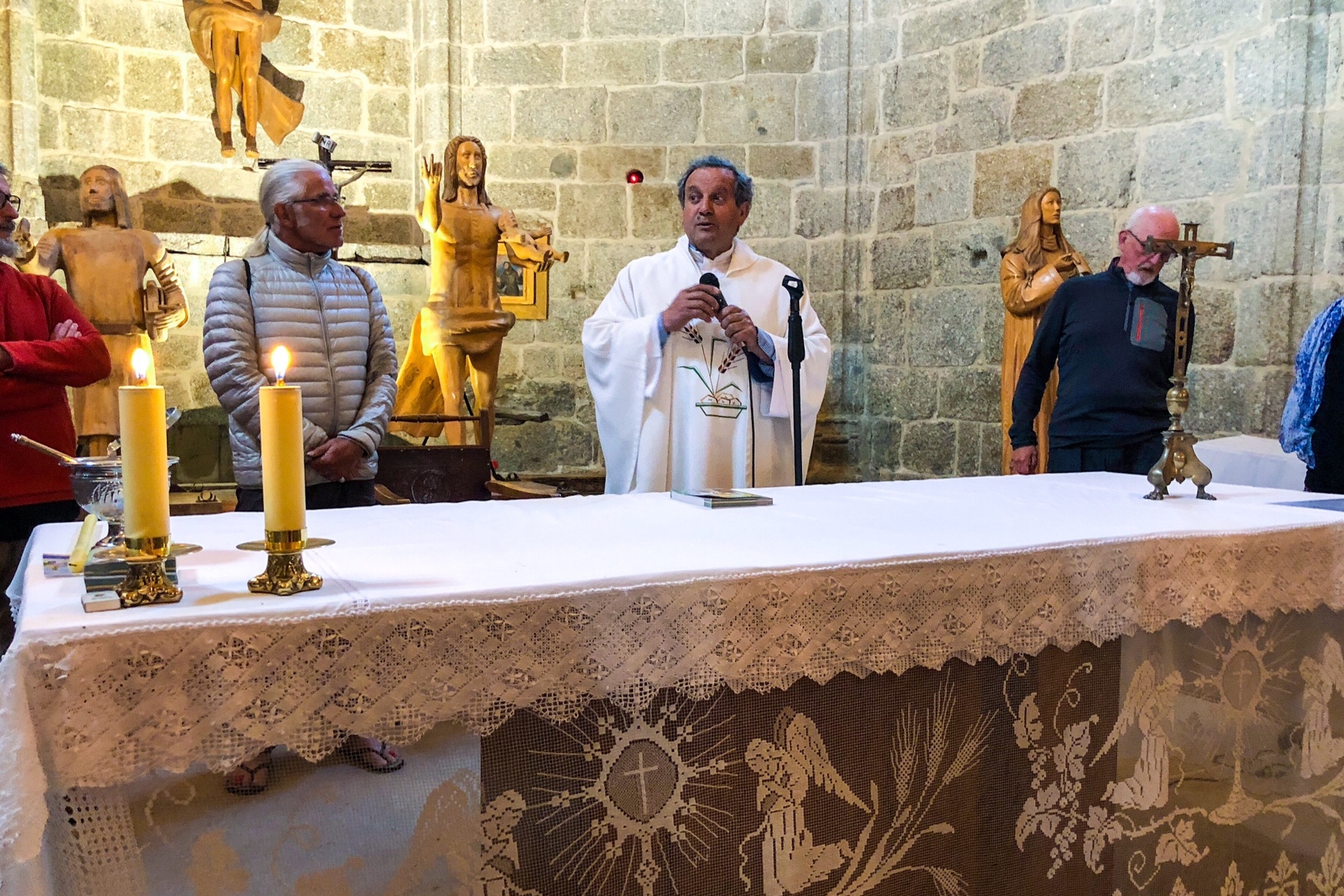 As we mentioned before, today was to be a “marathon day.” By this, we mean exceeding the 42 kilometers that comprise a normal marathon race. Why do this? Well, Mikey got a really good rate on a hotel for our scheduled rest days in Salamanca but forgot to check its cancellation policy prior to booking. Ergo, when all rooms were full at Caparra and we had to deviate from our itinerary, we ended up being almost a day behind schedule. 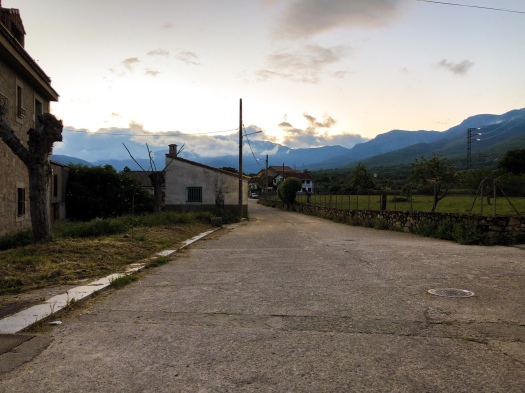 When we exited the town just before 7 am, there were absolutely no other people about the place. This was a good thing since a rather bleary-eyed Mikey wouldn’t have been too nimble around motor vehicles this morning. 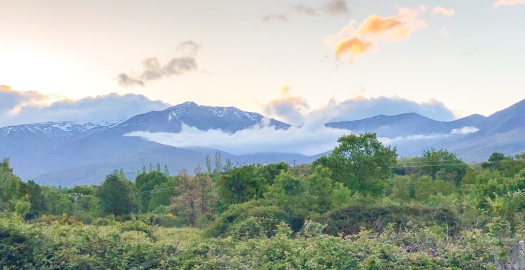 The sunrise over snowcapped mountains was well worth the early morning wake up call. Still, we wondered which of these we would have to trek over before laying our heads down tonight. 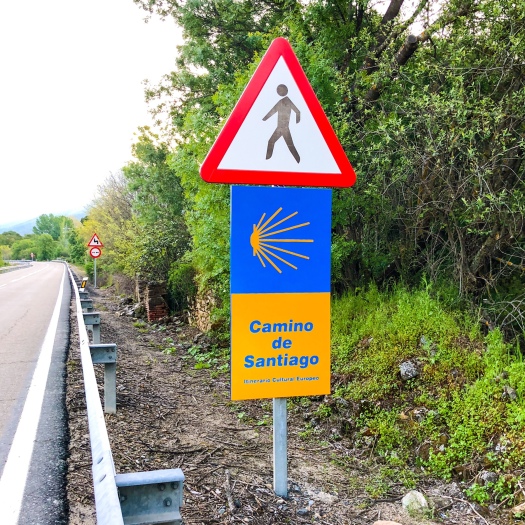 Much of our initial hike was on the very small shoulder of the highway. (By this we mean between the white line and guardrail.) Signs like this gave us some, albeit meager, hope of actually being noticed by passing vehicles. 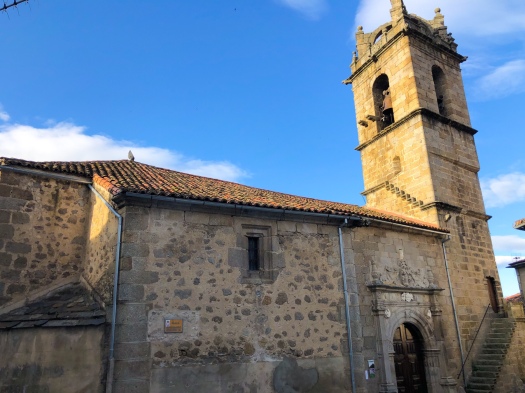 Although the first 10km was quite difficult (considering the asphalt terrain and close-passing vehicles), we reached Baños de Montemayor within a couple of hours and were able to traipse around the vacant town for a while. This Church of Saint Mary of the Asunción was built in the 16th-century and has a pretty cool bell tower.

Still, Mikey has had quite a lot of fun with the name of this town. Specifically, if one considers the three words that comprise the town’s name: baños (bathrooms), monte (mountain), and mayor (largest, or most important), its name could roughly be translated into the “Bathrooms of the Great Mountain” or, maybe, “Big Mountain Toilets.” But this would be a bit of a poor rendering given that the baños part specifically refers to the Roman baths that were located near some very impressive mountains which fed streams of fresh water into them. (So much for Big Mountain Toilets, Mikey!) 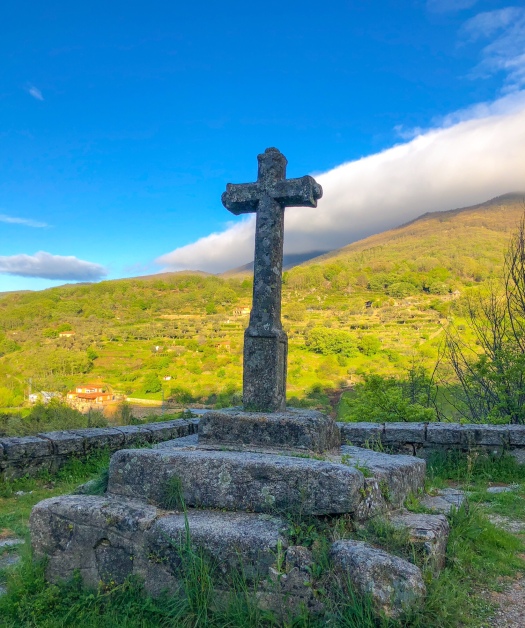 Regardless of the toilet/bath translation issues, we had to ascend a very steep hill to exit the town. Midway through the climb, we saw this handsome cross marker. 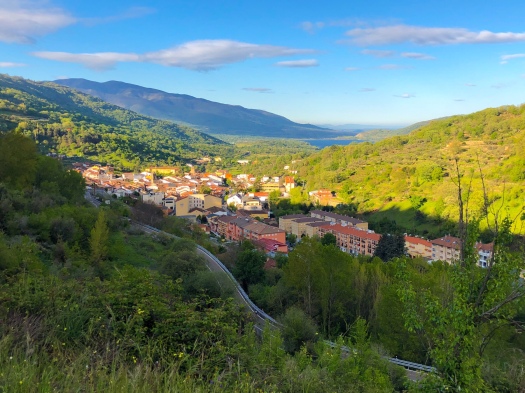 After quite some time, we looked back and snapped this shot of the whole valley through which we had walked today. Yes, after two Caminos, we are still amazed by the backward glances to the terrain over which we have traversed. (Oh, and we just left the boundaries of Extremadura and are now in Castille y Leon.)

This was a pretty cool map of the Via de la Plata that we found under an overpass. “Are we there, yet?!” 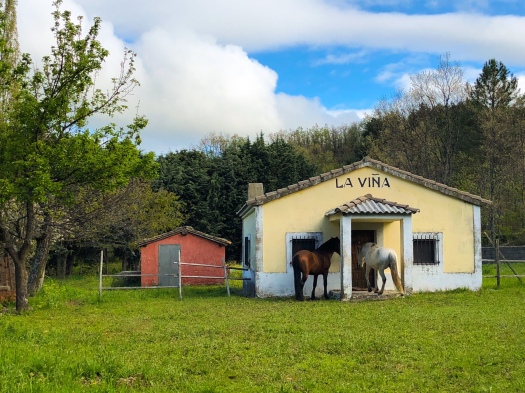 OK, if you need to, zoom in on this image. Let’s face it, this is the best set up for a “knock-knock joke” we have seen in a long time. Seriously, these two horses were really stomping and knocking at the door. 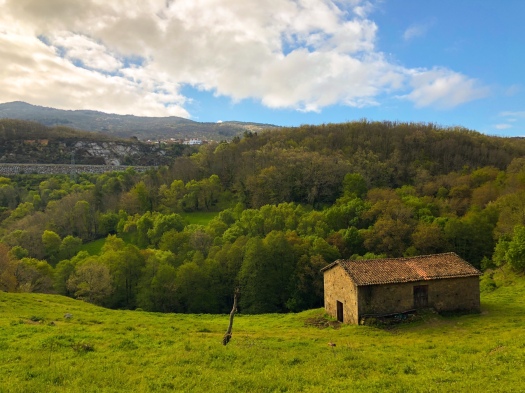 If Mikey had his druthers, he would knock on this door and buy the property at once. Just check out the view.

Speaking of views, we saw so many amazing vistas in a hitherto predominantly flat Camino. 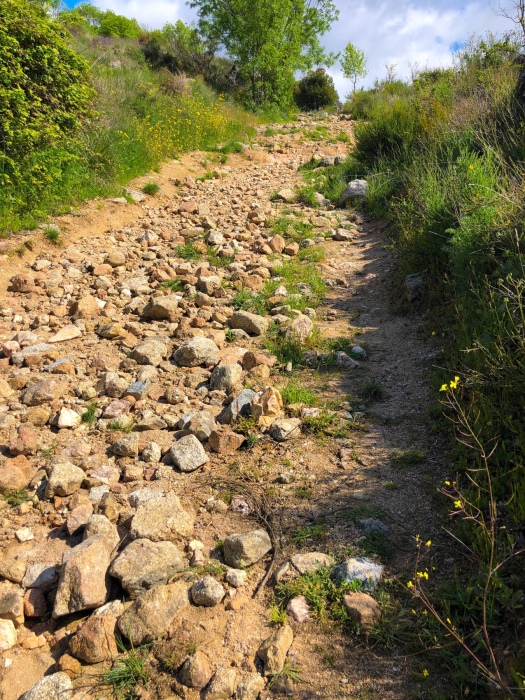 Snapshots like this poorly convey the very steep grade. On a positive note, it is unseasonably cool today, so that has helped quite a bit. 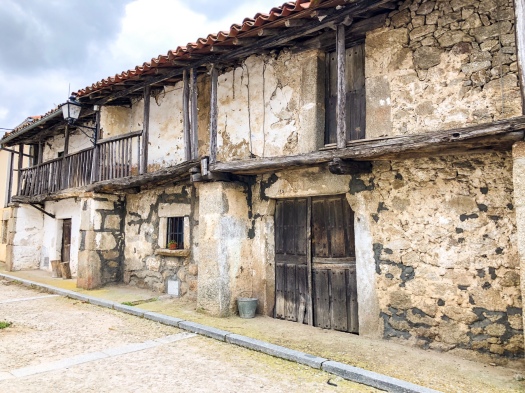 At long last, we did scale the mountain and arrived at a very quaint town. Although now sporting a population of just two dozen, there exist remnants of a somewhat larger and former population given its many abandoned houses. 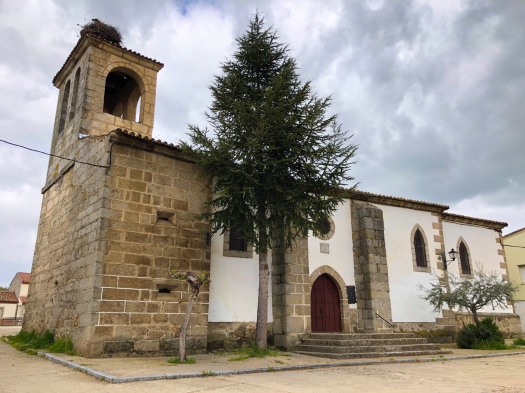 As usual, the church was in the center (“and God is in the heavens”), but we had little time to spend in this cute mountaintop village. 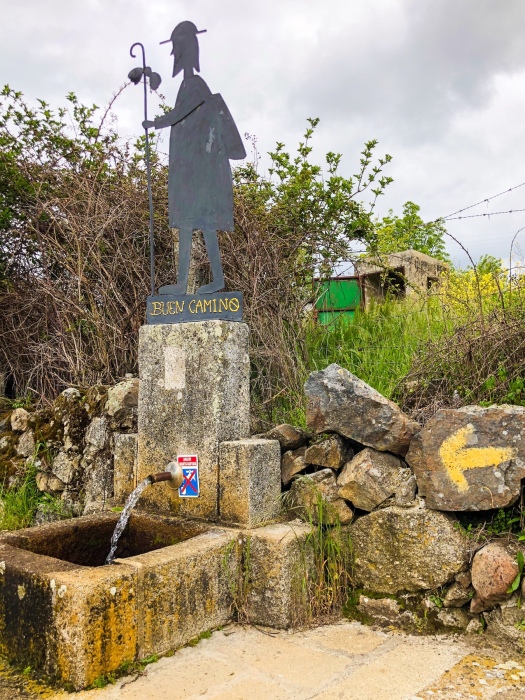 Oh, but on our way out of town, we noticed a nice pilgrim fountain. Yeah, zoom in and see how this “pilgrims fountain” sports non-potable water. Jerks. 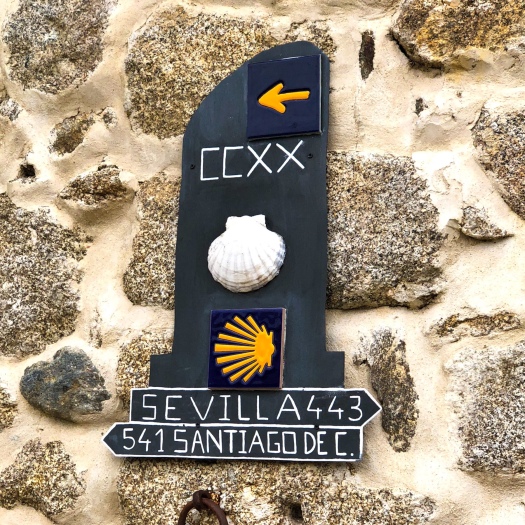 At least the mileage is getting a bit more reassuring. Remember, we started in Cadiz with a total of about 1,150k , so we’re over halfway there! 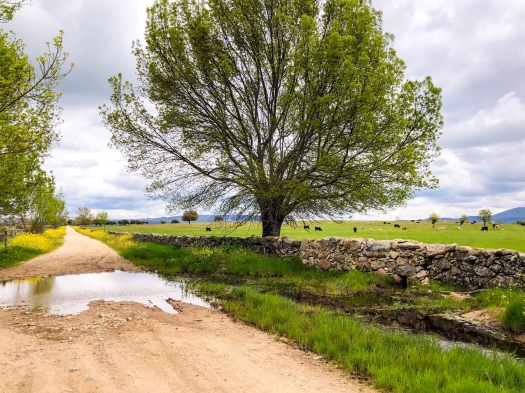 Following the mountain town, we walked mostly through fields of cattle.

Mikey has decided that, given such long and flat stretches, this particular Camino would probably be less monotonous on a bike. Maybe next time…

This sign in a cafe bathroom definitely merited a chuckle. 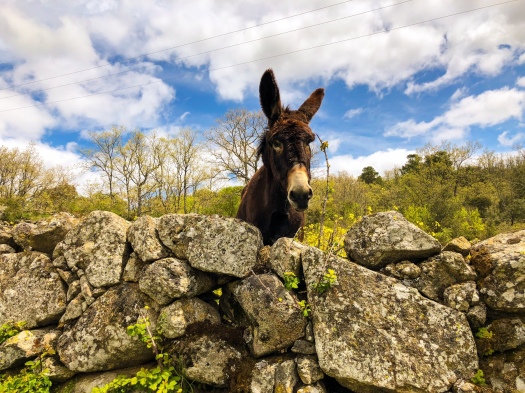 As did this donkey who came up to visit as we were approaching our destination for the day. As with many other “townies,” he came right up to the rock wall and wanted to be petted. 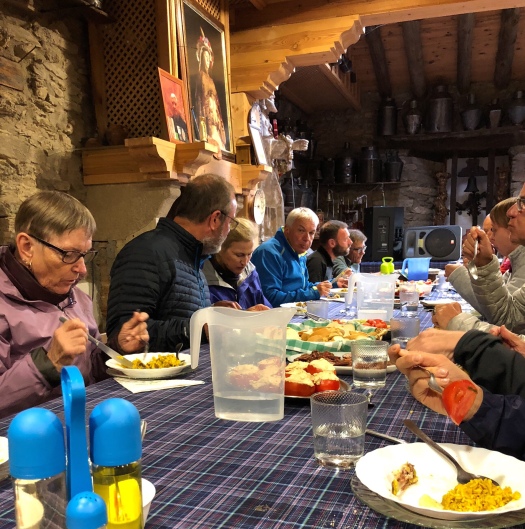 After a hot/cold shower (the water temperature alternating randomly between extremes), we rested briefly and then had our first communal meal at a donativo. These donation-based albergues are sometimes religious and often provide a communal meal for all pilgrims staying the night. Our group numbered close to twenty and the food was fabulous. 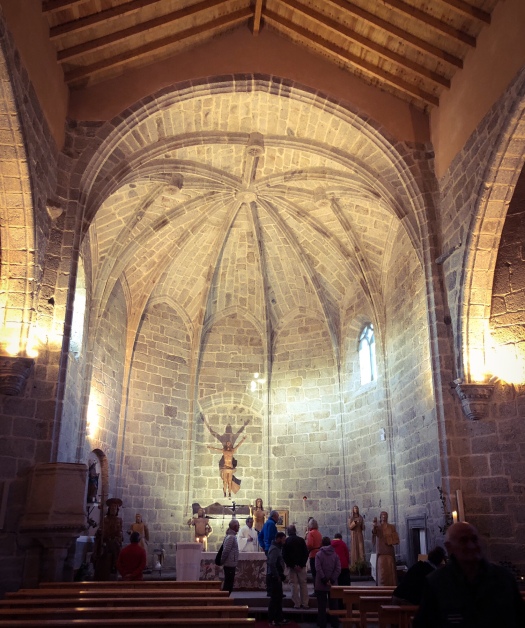 Following dinner, we were invited to the local church for a pilgrims’ mass led by Father Blas – the priest in charge of the albergue. It was held in a newly reclaimed and renovated 15th-century Gothic church. 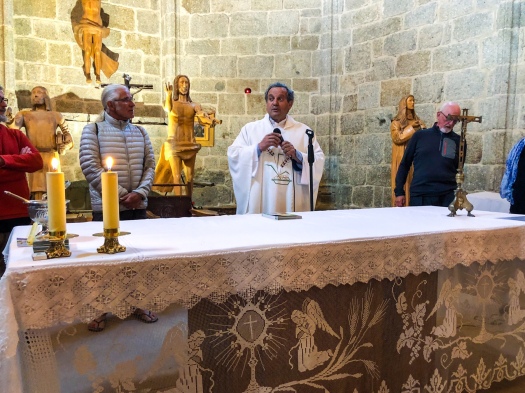 Following the mass, Father Blas gathered us around the altar and blessed each pilgrim. 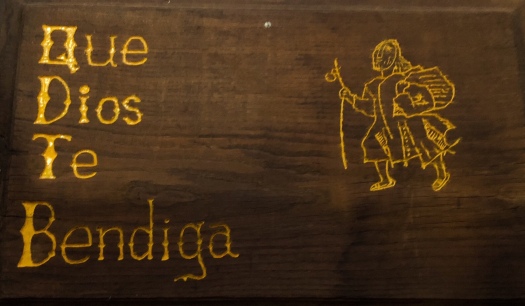 We passed under this plank of wood on our way up to the attic dorm and slept soundly under warm blankets in the cool night air. Buenas noches.