We had the option today of taking one of two paths. Practically equal in distance, one led through two towns to our destination while the other climbed up a mountain and had no stops en route to refill on water or food. Given our double day yesterday (and still sore feet), we decided to opt for the less mountainous path. 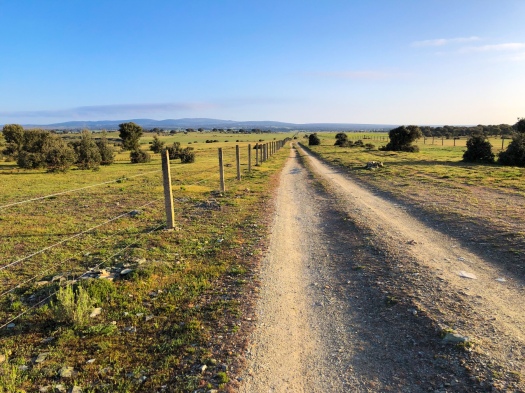 We began walking down a long and straight path through lots of open fields. It was interesting how flat and barren the land was – and, for once, absent of animals.

The road was marked, though, by these ancient Roman milestones. Many were missing, but the marker for mile 153 (measured from Emerita Augusta – present-day Mérida) was quite beautiful in the morning sunlight. Wow – so that must mean we’ve marched 153 Roman miles from Mérida. Gosh, talk about Legionnaire Mikey Maximus!

Before Mikey changes into his marching sandals, let’s bring it back to the present day. We did encounter a few of our more familiar Camino markers emblazoned with Santiago’s symbol – the scallop shell.

We’ve also become accustomed to these wooden Camino stakes that we began seeing after crossing into the autonomous community of Castile y León. The basic design consists of a scallop shell symbol and a yellow isosceles triangle pointing in the correct direction of travel. 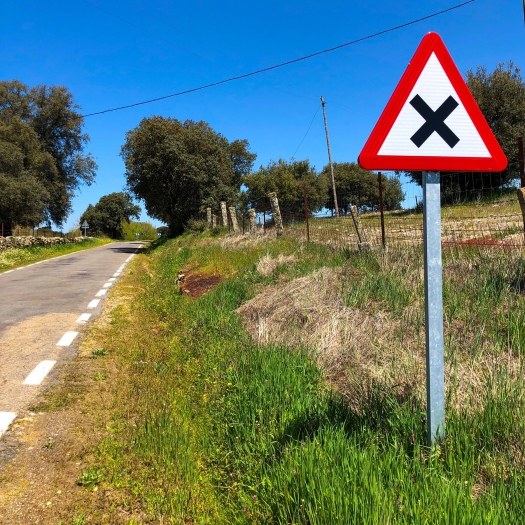 Speaking of correct travel, Mikey’s not sure, but he’s hoping we didn’t do whatever it was that this sign warned us against doing. The best we could surmise was either “Caution, crossroads ahead” or “You’ve got it all wrong!” 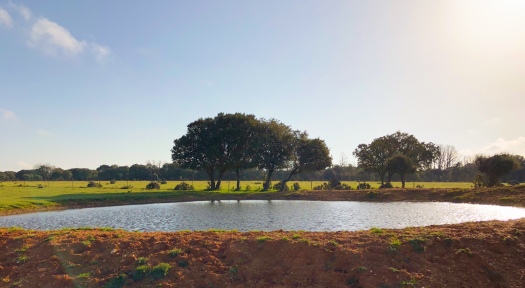 Regardless, we trudged onwards and saw some wonderful scenery. 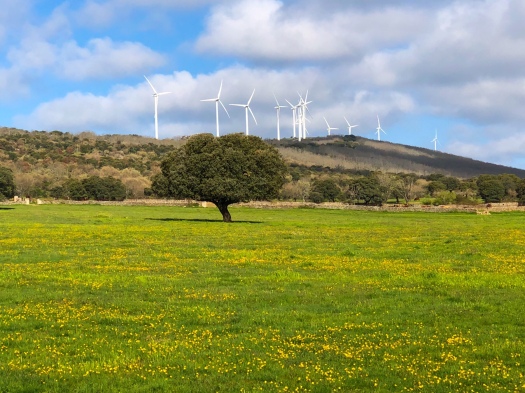 We even walked around the hills we had decided not to climb and saw a wind farm at seemingly full capacity in the distance. It really is amazing how quickly those massive turbines can rotate on a windy day like today.

We even found this amazingly sunny patio in one of the villages we walked through. Given the very strong and cold breeze through which we’d walked all day, it was nice to have a warm interior patio for a bit of a rest.

At long last, we reached the albergue at Morille and found that we were the first to arrive on foot. A fellow pilgrim and dear friend of the group had arrived in the early morning via taxi to rest an injured leg. After she kindly directed us to the albergue and the only cafe in town, we settled in and rested our own tired feet until a communal dinner with the rest of our group.

To our amazement, many of our group who had chosen the mountain route spoke of how uncomfortable it was. The high winds we had experienced were exponentially greater in the mountains and we became even more grateful for having chosen a path more suitable given our condition. But, more importantly, we all made it and each of us were able to tell stories about the day’s trek over a simple dinner eaten much too early according to Spanish norms.

Tomorrow, we will hike into the city of Salamanca where we will all split off for rest days at different hotels and pensions. A few will take buses ahead to further parts of the Camino while others must catch flights home. Some, like us, plan to rest for a bit before continuing along the Via de la Plata on foot. But for now, we pilgrims enjoy a meal together and hope for sound sleep to prepare us all for yet another day’s hike along the way. Hasta entonces.