Although Morille’s one cafe opened at noon, the owner agreed to make breakfast for our group if we all showed up at 7 am. Although said breakfast wasn’t that exciting (4€ for toast, coffee, and a juice box), it ensured that we were up and walking pretty early.

Sure, they didn’t have 3G (much less 4G) wireless in the town, but even rural Spain is advanced in things like alternative energies. From the wind farm we saw yesterday to the seemingly standard solar arrays that we’ve passed outside of most villages, the Spanish are putting America to shame in this respect.

It does seem, however, that the people in these parts would be foolish not to utilize two naturally occurring renewable resources. Although we didn’t have such strong winds today, the sun shone bright along the flat path we walked.

And just look at these two young sunbathers. While they were out for a walk, the cutest thing we’ve seen thus far are young calves lying on the grass in full sunlight while chewing with their eyes closed. Talk about utter contentment.

We did pass a couple of other pilgrims, like our Polish friend, Anya. She was the darling who arranged last night’s and this morning’s meals with the café owner, allowing the rest of us to just show up and eat! God bless the “planners” among us. 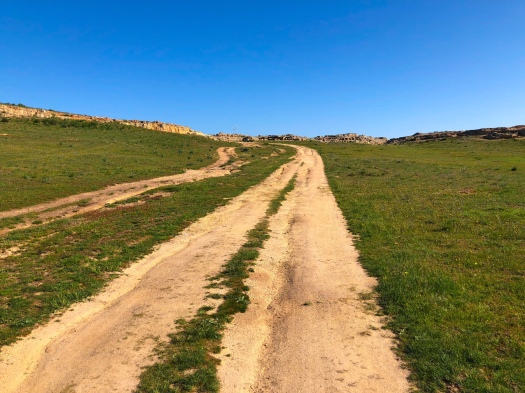 Since Anya was still nursing a sore leg, we sped ahead and into the open fields for a final climb into the city.

As we neared the summit, we could make out a Camino cross perched at the top. 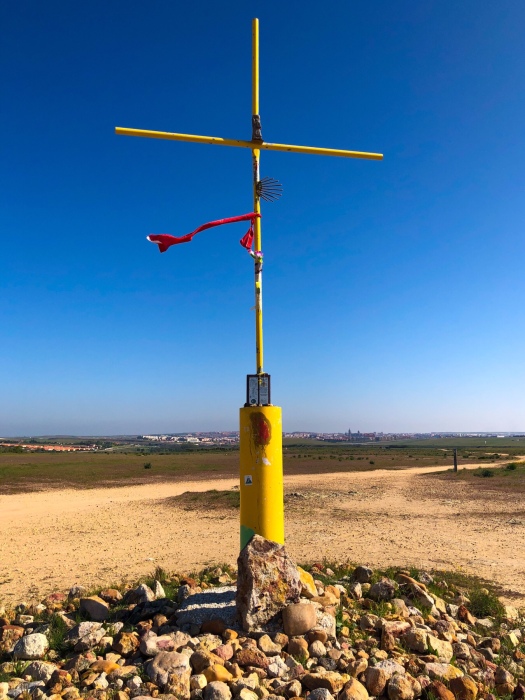 Often very simple with a few symbolic markings, these crosses rise from a mound of rocks. While this has always been a pagan practice, modern-day Santiago-bound pilgrims love making rock piles. 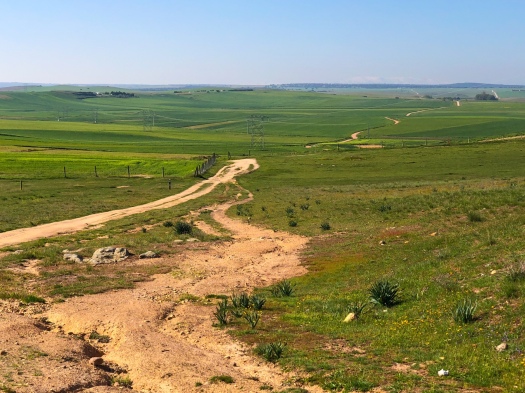 This was the view looking back over the distance we traveled this morning. 20km (or 12 miles) doesn’t look that far, but it took about 4 hours to walk. 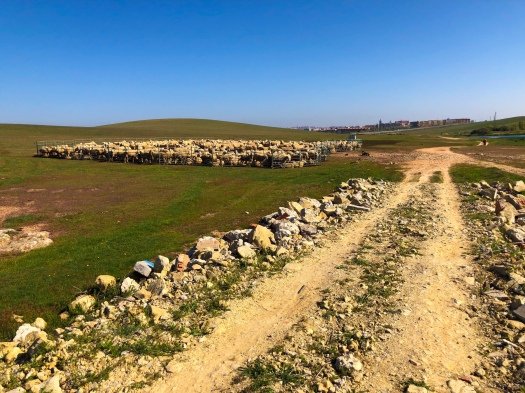 We were close, but not quite there. In fact, it was quite odd seeing a corral of sheep this close to the suburbs. Oh, and there was no shepherd in sight – just one very jumpy sheepdog.

This underpass has absolutely no significance, but Mikey thought it framed the city skyline well. Also, we think he gets a kick reading Spanish graffiti.

At long last, we reached the city of Salamanca. This is an ancient bridge that leads into the city and you can see the cathedral towering over everything else.

Speaking of which, the cathedral is located at the heart of the city and is visible from most parts, making it a wonderful point of reference as one meanders through the winding medieval streets.

Also centrally located on the Plaza Mayor which was currently hosting the city’s annual Festival of Books. Sorry, Kindle, but hard copy books are still thriving in Spain and book fairs are a really big thing here. Yes, this has been a huge shock to our protagonist as now ebook-loving Mikey remembers them from the 1990’s, but didn’t expect to see such continued popularity. Perhaps it’s refreshing, though, to live in a world where paperbacks and selfie-sticks can coexist. 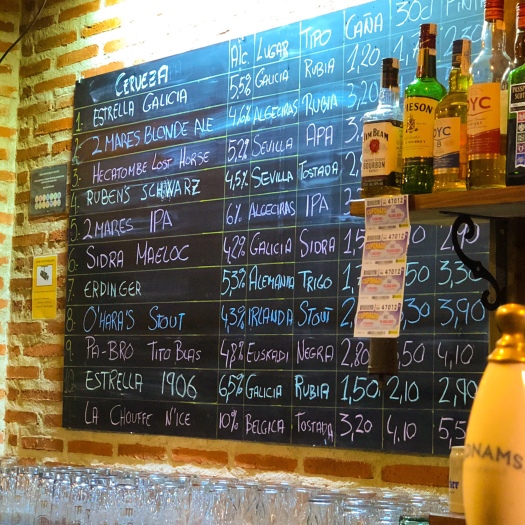 Ah, yes – refreshments. After settling into our hotel and walking the city to get our bearings, it was time to try one of the craft beer bars in the city. Although they had nothing from Salamanca, we were able to taste a couple of beers from Andalusia that we had missed while there. 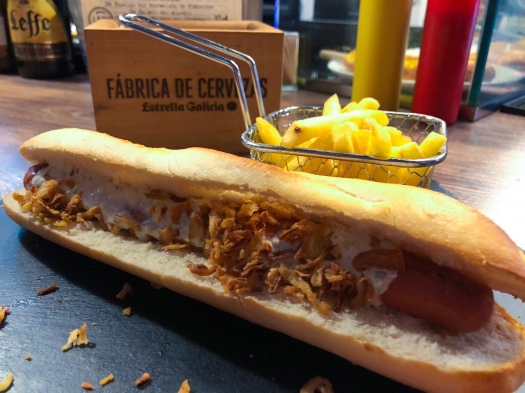 Oh, and don’t forget the 25cm hotdog with goat cheese, yogurt dressing, and fried onions. The fries were a letdown, but this dog could give Coney Island a run for its Euro any day!

Well, we have much to do tomorrow and want to enjoy our private room and own bathroom with walk-in shower. (Mikey’s most excited about the waterfall shower head.) So, we bid you goodnight and will report soon on tomorrow’s full day of playing tourist. Hasta entonces.