Last year, we took a short day trip to the city of A Coruña following the Camino del Norte. It was fun, but we regretted not staying longer.

So, Mikey cashed in some Hotels.com points and we got a pretty simple room for two nights. It was a very standard (but free) room. Basically, we sought it out on account of its location in the heart of the old city. (Oh, and a huge bathtub meant a long soak to wash off all that pilgrim grime.)

A Coruña is a northern Galician city located on the Atlantic coast. Complete with several marinas, it retains the look of a fishing village. 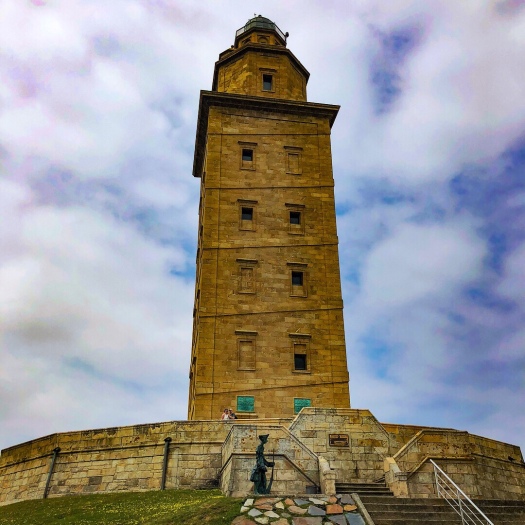 But, its claim to fame is the Tower of Hércules – the only Roman lighthouse still in use. Built in the 1st-century CE, it is a beautiful tower that was saved in the early 18th-century by cladding the original structure with new stone. Ergo, the Roman building remains intact within the new part. Oh, and they added a Baroque topper to it for stylistic purposes.

Upon entering the base of the lighthouse, one winds around through an area where the original foundations are currently being excavated.

Of course, the main event is climbing to the top and taking in the views below. This modern compass mosaic just looked neat.

It was pretty windy and there was a bit of rain, so we didn’t stay too long. Yet, the views were rather breathtaking.

Next on our list was the Castle of San Anton. Built in the 16th-century by Philip II, it has served as a defensive fortress and prison.

While not as glamorous as the lighthouse, we had fun touring the grounds and checking out some of the armaments from bygone eras.

Defensive in nature, there were many archers’/gunners’ posts that now mainly serve as perches for a plethora of seagulls.

As the compound was once an island fortress, this cistern was used to store rainwater since the castle had no access to freshwater. Yeah, not drinking this stuff even with our Brita water filters!

There was also a small collection of Roman artifacts and remains like this 1st-century guy. From bones to pottery and even bronze era spears, it was a small but convincing collection.

Talk about convincing – we stayed well away from the door on which this sign was posted. If it was warning about the risk of electric shock, it was certainly one of the more animated signs we’ve ever come across. Still, Mikey thinks it might have warned about divine intervention or perhaps advertised a faith healing. Who knows? 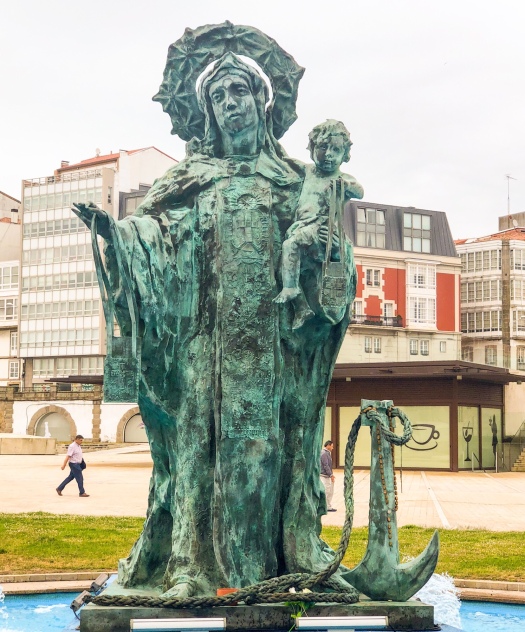 Also a bit scary was this modern statue of Our Lady Carmen of the Sea. Let’s face it, we really got the Michael Jackson/Blanket vibe out of this one. Don’t drop that baby! 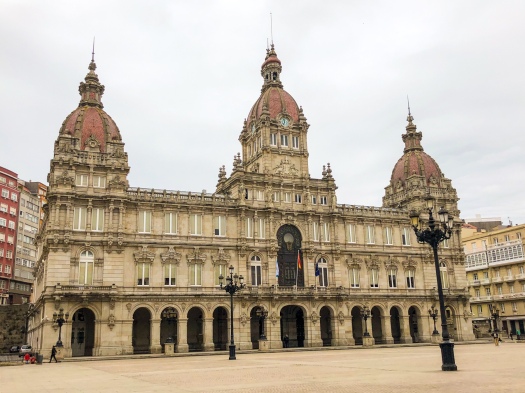 There were, however, many beautiful buildings like the Town Hall.

Always a stage for demonstrations in A Coruña, its plaza hosted a protest against single-use plastic bags on this day. It’s funny how we just voted to ban them in California, but Spaniards can be very dramatic!

We did return after the demonstration to capture this beautiful night shot. Surprisingly, though, the building is a mere 100 years old. Glad to see that Spanish architects still have it in them.

Aside from a history of architecture, A Coruña is best known for its seafood. After all, when your graffiti spotlights a local favorite, we can surmise what is forefront in the minds of the populace.

This was one of our delicious meals – a hearty salad with roasted red peppers and cured meat alongside the famous pulpo, or octopus, dish.

We also found our favorite Padrón peppers and a baked squid dish that was intensely savory.

A bit more on the artsy side was this gourmet salad garnished with local sardines and baked salmon served with guacamole. Probably not the best combination, but we gave the salmon-guac dish a go. 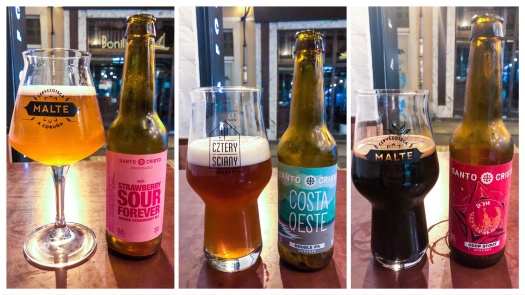 There were also plenty of local beers. While not from the city proper, these Santo Cristo (Holy Christ) beers hailed from Ourense – a place we hiked through on the Camino.

Oh, and the bar snacks were really tasty, too. This plate was listed as “fried tiny baby squids” on the menu (2€). Think of it as fried calamari with visible eyes! 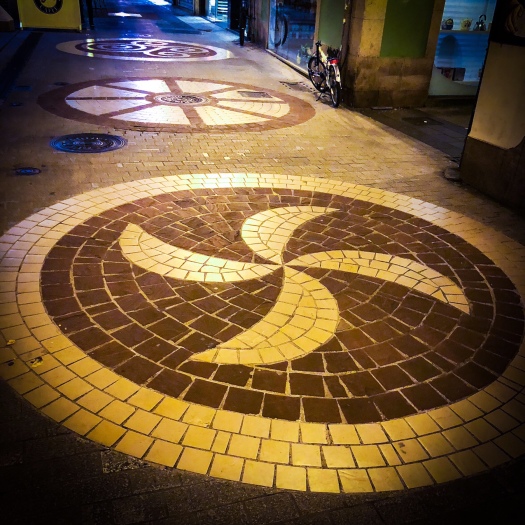 Even the streets were beautiful at night with their Celtic mosaics. Similar to the patterns found in much of northern Spain, these Galician designs were prominent throughout the old city.

Finally, following two nights in the city, we gathered our things and headed off towards the bus station. Along the way, we stopped for a morning coffee and final bite of tortilla. (We’re going to miss you, my dear mid-morning nosh!)

At long last, we’re leaving Spain and heading south to Portugal. It’s about 5 hours from A Coruña to Porto via bus and, after a few days there, we’ll head further south to Lisbon via train. Hope you’ll stick around and check out the sights in a country where we don’t speak a bit of the language. Until then, adiós desde España.