Yep, you guessed it – this is a whole post dedicated to food and drink found at the end of the Way. Regardless of which path a pilgrim takes, he ends up here and gets to try some amazing dishes. Part reward and part exploration of Spanish and Galician gastronomy, Santiago is a food and drink Mecca. Are you ready?

Last year, we discovered the Meson del Bomberos or Firefighters Inn. The food you saw before (the Padrón Peppers and such) were from this place. Throwing caution to the wind, Mikey decided to taste through their menu over three days! Yeah, it was a surprising move even for this crazy pilgrim, but we tried three different combinations over as many days and were not disappointed in the least.

Above is a Caprese salad, octopus, and a chocolate mousse cake. We did white wine with it and the flavors were absolutely divine.

The following day, we tried a typical “mixed” salad, baked cod, and a perfect coffee mousse for dessert. No joke – if ever you visit Santiago de Compostela, you have to try this place!

Oh, and like many traditional Galician restaurants, they serve the house wine from clay carafes and it is drunk from a bowl. Yeah, chalk that one up on the culinary factoid sheet!

Big, main meals aside, we also spent a lot of time exploring the tapa/pincho bars that abound. A more Northern tradition, the foods are presented on the bar and one only has to point when he sees something eye-catching. (In this case, note the dark-colored sausage to the left.) 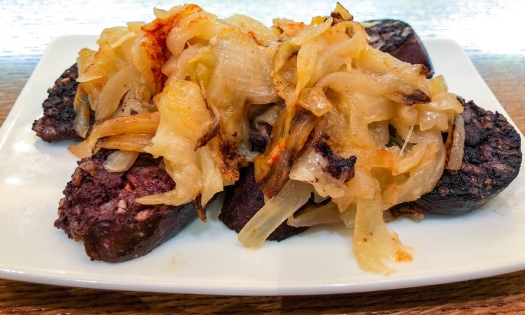 Once ordered, many of the dishes are rushed off to be prepared and return nicely plated. This particular choice was morcilla which is better known to English speakers as Blood Sausage. Yeah, sounds a bit off to Americans, but it’s amazing and came topped with caramelized onions.

No Camino would be complete without trying the famous scallops whose shells we’ve been following. This one was also accompanied by a shrimp.

Cooked and plated, it had a nice pesto sauce on top and was simply delicious. 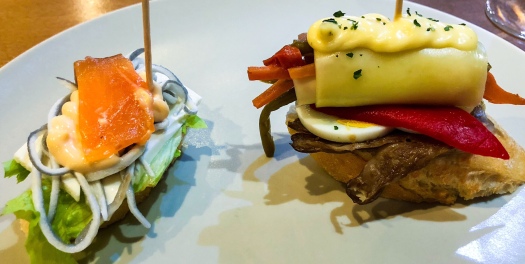 There were many other pincho bars and we definitely made the rounds. Given its proximity to the ocean, Santiago hosts quite the plethora of seafood dishes.

The combinations are also impressive. In this case, there was shrimp, salmon, tomato, and caramelized onion on top of toast.

But, the Spanish sausages are always on display. Many places hang them up next to wine lists as if bragging about their quality.

In most bars, the purchase of a drink will get you any range of noshes. A bit heavy compared with others, we really scored with this complementary feast at a craft beer store.

More often, there’s just a bit of bread, cheese, and meat that is offered for free. So, one might be able to snack all day – if his liver would be up to the task.

It’s almost as if the Spanish feel obligated to give patrons something to eat. We ordered a Coke at the bar next-door to a laundromat (very convenient) and got a rather sizable container of mixed nuts.

Then there were the gummy bears at this black-lit bar. Yeah, that was a little weird.

But, they also had a rather psychedelic foosball game among other oddities like Halloween decorations in May.

Speaking of odd, we got to try the mystical Galician Queimada. Made from aguardiente – a spirit distilled from wine, herbs, citrus, coffee beans, and spices are added before the entire concoction is set on fire. Then, an incantation is read as the mixture is stirred. (Hopefully, much of the alcohol is burned away during the process.)

Later, the cooked wine is left to cool in clay cups before being imbibed. Not the greatest beverage, but it was certainly an experience to cross off the bucket list.

Finally, there was the after-dinner liquor tasting. (It seems like the Galician people will make booze out of just about anything.) Included above was a white coffee (clear), black coffee (dark), strawberry (pink – and surprisingly similar in appearance to Pepto Bismol), herb (yellow), and Padrón pepper liquors. All were pretty interesting and are normally served as digestive sippers after a meal, but the pepper and white coffee chupitas really stood out.

Well, that about does it for our food and beverage edition. Please know that all of the above was tasted over a few days, so Mikey made it back to the hotel upright each night! Next up, we’ll travel north to the coast where we will show you a Roman lighthouse and some more great Galician food. See you then!