Greetings from Madrid – once again! Although the flight was slightly more jovial than last year’s return from Madrid (insert a rowdy Spanish youth soccer team in place of a cabin full of slumbering Mormon missionaries), we arrived this morning to a most drizzly Saturdy in the capital. As such, there exist fewer outdoor pictures to post this year, but rainy days can be fun and we’re taking you inside some new places within this historic city.

But first, as a recap, Mikey had a wonderful, albeit brief, stay in Georgia where he spent time with his parents, met up with friends, Ed and Georgina, ate too much and did some last minute shopping for the trip. 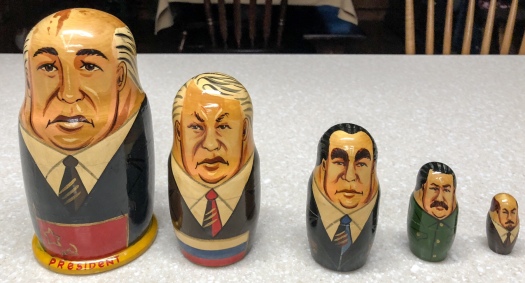 OK – this is NOT going to Spain, but Frank and Nancy know their son too well and surprised him with a very Soviet gift! (Can you name them all?)

Following the fun sojourn, Mikey left his parents’ house yesterday for a short ride to the Atlanta airport. Oh, and guess who still had errands to run? So, after calling from the international terminal to suspend his home internet and mobile devices, Mikey settled down for a well deserved southern bon voyage – fried okra!

Yeah – way too much to finish (especially considering that the plane was already boarding when Mikey was served), but it was a nice send-off all the same. 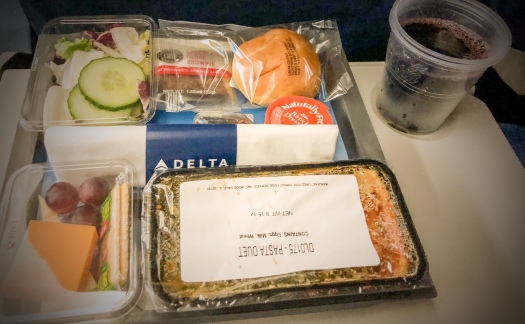 Oh, and it really beat the Delta in-flight meal of lukewarm pasta, iceberg salad, crackers and a bit of cheese. (At least they got the wine pour right.)

On a more positive note, the pilot really stepped on it and we arrived about an hour early to a very rainy Madrid. After a quick stop at Passport Control, we gathered our bags and walked the full mile from baggage claim to the metro. Seriously, Madrid-Barajas International really needs a tram!

Arriving in Puerta del Sol, Mikey immediately saw the contrast from his last visit (July 2017). There’s some joke in here about April showers, but we’ll spare you, dear reader.

This year, we’re staying at a different hotel which is located just off of the Gran Via (one of the main thoroughfares in Madrid). It’s located in an area full of shops, restaurants, and bars, so you might notice the Calvin Klein store right outside of our 2nd story balcony. While one might imagine that such a prime location and street-view room with a balcony would be pricey, Mikey got it for $28 a night! Ok, but what’s the catch? 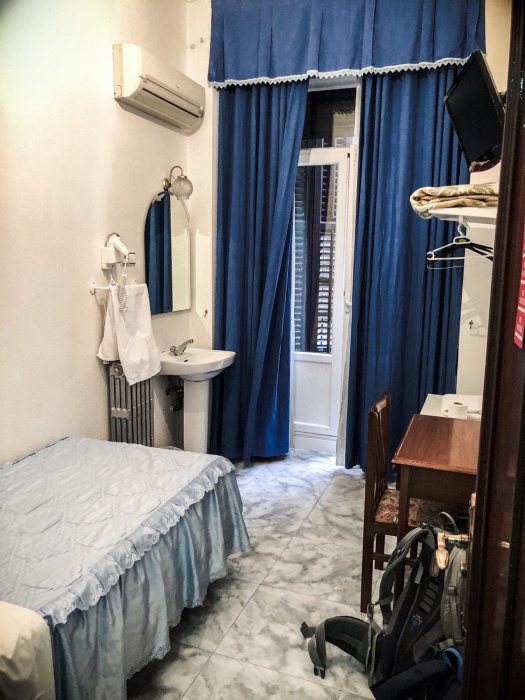 Well…a twin bed, desk, sink, and TV pretty much fill this monkish cell! Oh, and guess whose room all those partygoers pass below while yelling and screaming at all hours of the night?! Let’s just say that Mikey will probably keep repeating his mantra, ”Location, location, location,” all weekend! 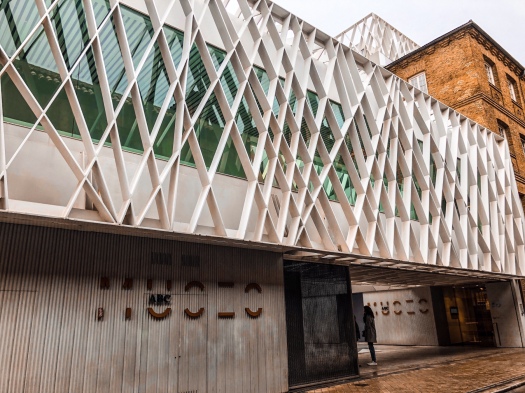 After settling in at the hotel, we headed to ABC – a free modern art museum. Aside from some interestingly self-censored Franco era cartoons, it was kind of a bust.

Well, that is with the exception of a full-length mirror where Mikey had to take a selfie. (Translation: ”Now there are three of us.”) Jackass.

A quick email check reminded Mikey that April 7th is National Beer Day in the US. So, off we went to Fabrica Maravillas – a brewery less than 2 blocks from our hotel. If you’re wondering, those are cañas or 6oz pours. Also, the gent in the background is Brendan. He’s an Irish expat who has also walked the Camino, so we had a lot to chat about until it got too busy.

Also close by is the Mercado San Ildefonsa. In a city pretty much saturated with local markets, this one stands out due to its prepared food stalls and is a popular starting point for nights out on the town.

Still, it has kept some of the fish, meat, and produce vendors from which its initial fame grew. (Ok, whatever that fish is, count us out.)

Since today is clearly an inside day, we headed next to the History Museum of Madrid. Housed in a former hospital, it attempts to convey the story of how Madrid came to be the modern cultural and political heart of Spain.

While we won’t bore you with this particular story, Mikey wants to include this picture of Charles II who was the last Hapsburg King of Spain. He’s basically the historical poster child against kissing cousins since inbreeding left him sterile and with a jaw that could never fully close. Even worse than just being a mouth-breather, Charles spoke only indecipherable French and drooled constantly when he ate. Yes, it’s sad and that’s why you shouldn’t cruise at family reunions. 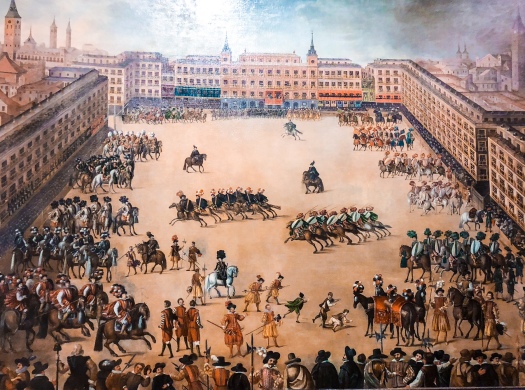 Also of note were the many paintings of Madrid and its urban features. Above is an 18th-century depiction of the Plaza Mayor. Note the heraldic dress and equestrian focus of the scene. We’ll visit the Plaza Mayor tomorrow to compare.

The museum was interesting, but Mikey was ready for food. So, we found a coder, olives, and fried squid sandwich for 5€. 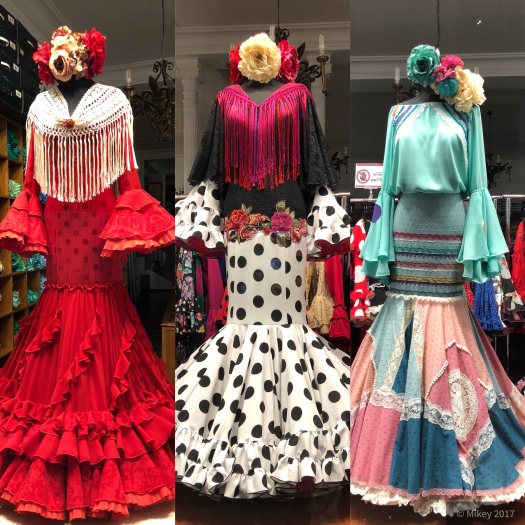 After that, it was time for some early Mother’s Day shopping before an evening stroll near the palace.

This is the Cathedral of Madrid which is located next to the Royal Palace.

It was uniquely lit tonight due to the heavy rain clouds.

This is a shot of the Royal Palace. Mikey had to thrust his iPhone through the gate to get this shot, but we’ll probably pay to see the inside tomorrow. That said, it’s probably time to get some rest.